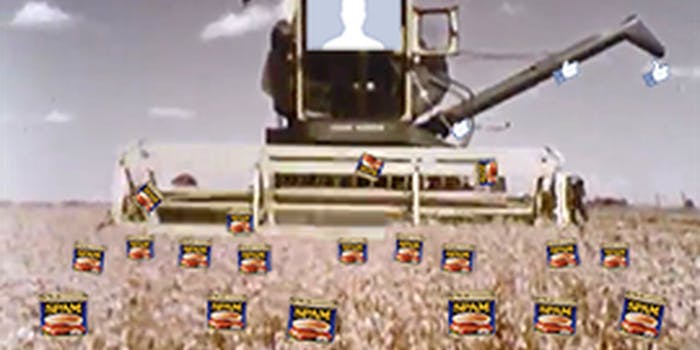 Facebook recent tweaks to give greater weight to images and talked-about pages has had unintended consequences for the social network.

In the lofty idealism of Facebook, the world’s largest social network fosters basic human connections. It keeps you in touch with the people you care about. The number of friends you boast on Facebook is a direct measure of the richness of your social life.

Now, the company rhetoric, always tenuously connected to reality, is verging on fantasy.

Content farms—long the scourge of Google searches, returning worthless junk for promising results—are migrating to Facebook. And they’re sucking the humanity out of it.

On Feb. 1, we introduced you to one. It’s called Stylish Eve.

Maybe you haven’t heard of a content farm. But surely you’ve stumbled upon one. That’s how they work. You click a search result looking for answers, and end up on useless filler. The label usually describes sites that pay pennies for cheap, low-quality articles that are nevertheless fine tuned to hit all the right notes for Google’s search algorithm.

Despite seductive headlines, the articles invariably disappoint. A recent post at eHow, for example, promises to teach you “How to become an actor.”

To content farms, quality and utility aren’t important. All that matters is your Google click-through—that brief moment when your eyes hover over their ads. The farms deflate the value of the entire Web through the sheer volume of their junk. They’re just another form of spam.

In 2011, Google introduced tweaks to its algorithms intended to cut down on the farms’ sway over its search results—changes that largely worked. But rather than fade away and die, some simply moved to more fertile ground. 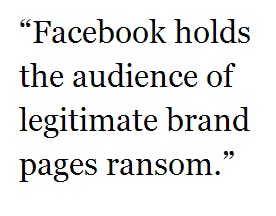 Like their search-engine predecessors, sites such as Stylish Eve are ruining the platform that sustains them and succeed thanks to a devilishly simple formula. On Facebook, this means sharing disposable visual fluff.

The Egypt-based company reigns over a network of hugely successful fashion and lifestyle Facebook accounts with names like “Dresses,” “Home Decorating,” and “Heels.” More than 5 million people subscribe to a Stylish Eve page on Facebook. Each of its satellites present a stream of (mostly stolen) images to subscribers, along with a spammy, self-promotional link to either another page in the network or to the mothership, StylishEve.com.

At the home site, quality takes a backseat to volume. A recent post about Valentine’s Day gift ideas, for instance, is just a collection of orphaned photos nabbed from online catalogs. It’s the online version of a child’s magazine collage, with none of the endearing innocence. The bumper text for the article also reads like a child could have written it:

“The idea of buying expensive and lavish gifts for women on Valentine’s Day is definitely a matter of discussion between many.”

“Technology devices are not so common among women. However, they love to accessorize the devices they are already using, so make sure to help her on that task.”

Everyday, Stylish Eve subscribers complain that the site doesn’t provide links to purchasing info. But Stylish Eve ignores them. It wants you to stay right there, to keep your eyes on its content—and its ads.

In our story, we focused on how Stylish Eve raided commerce community Polyvore. There, users can mix and match products from a variety of online storefronts and share them in attractive sets. They look like this: 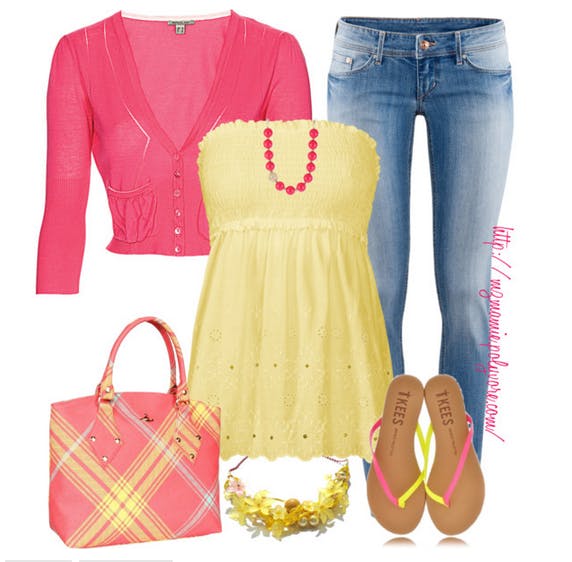 Stylish Eve’s flagship spam page, Dresses, subsists on a stream of these images, lifted directly from Polyvore profiles without permission. The Polyvore community was outraged by this revelation. They launched a protest, copying and pasting a message to their profiles: “BE ORIGINAL. Do not copy sets of other members.”

A few days after the exposé on the Stylish Eve’s spam empire ran, the company’s CEO reached out to me. Ahmed Helmy, a 25-year-old from Alexandria Egypt, was not happy.

Bragging that his page gained 70,000 new followers on the day the piece ran, Helmy said “there [wasn’t] any need” to publish the story. He said Stylish Eve wasn’t spam but rather an “online magazine” that gave people “ideas” for their own fashion ensembles. He finished with a bizarre threat to send my article to Google “so that they can see how you judge their work.” 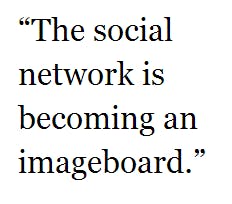 “A lot of people also want to purchase these various decorating items, but that’s not what magazines do,” Helmy said.

(Helmy was leaving out a key fact: The photographs on HGTV come from designers who voluntarily submit their own work to get feedback from the community.)

That wasn’t all, though. Helmy said he’d apologized to Polyvore users whose content he’d stolen. He said he even offered a job to one of my sources, to pay her for all the sets he’d taken and to hire her as a “designer” who would publish new sets to the Stylish Eve Facebook pages.

“So it’s untrue to say that we [steal] her ensembles without giving her any credit,” Helmy said—an implicit admission that he had been stealing before offering to hire her.

I asked if he’d reached out to every other Polyvore users whose content he’d stolen. He said “yes.”

That, I would soon discover, was one of many half truths he was telling in the wake of our reporting.

I contacted multiple Polyvore users whose content had appeared on the Stylish Eve’s Dresses Facebook page and asked if they’ve received a similar offer. Some had. Others most definitely had not.

One user, MzMamie, told me she’d been banned from multiple Stylish Eve pages after calling them out as content thieves and linking to our story. After censoring her critical posts, Helmy approached her with a payment offer. She refused.

“Now they are copying my sets [and] changing an item or two,” wrote MzMamie, who’s been leading the anti-Stylish Eve protests on Polyvore.

One Polyvore user told me she had no idea Stylish Eve posted her set on Monday, Feb 10—10 days after our article went live and a day after Helmy told me Stylish Eve didn’t steal.

No one ever offered to pay her a thing.

“I was not aware of the Stylish Eve Facebook page until I received your email and googled it,” she told me.

To prove he wasn’t lying about his job offer, Helmy emailed screengrabs of his entire private conversation with my source. I did not ask him to do this. It was private. They haggled over price. She revealed details that were clearly never intended to leave the conversation. When I told her what Helmy had sent me, she replied in an email: “NOOOOO!” She’d never given him permission to do any such thing.

Among Helmy’s other complaints, he claimed my accounting of his spam empire was inaccurate. He said he had nothing to do with the Fashionable page on Facebook. Fair enough. But that still means we got nine out of 10 right, putting his total audience at about 5 million. And it also proves he lied to other, unhappy Polyvore users.

Amy Webb, a mother and teacher, reached out to Stylish Eve after I interviewed her in January. She wanted to know why Dresses was taking her sets without permission. In a message she shared with me, Helmy told her he was helpless. “I can’t stop them. I can only control my own pages.”

“I am not the owner of Dresses,” he said.

That directly contradicts what he’s now told me on two occasions. When I asked him over the phone on Jan. 31 if he ran the Dresses page, Helmy answered unequivocally:

Even if Stylish Eve paid everyone who created their sets—even if it stopped stealing altogether—would that really matter? The problem, after all, has less to do with the morality of Stylish Eve’s business model than with the future it represents for Facebook: The social network is becoming an imageboard.

This is only possible because of a change Facebook made back in September 2011, when it greatly increased the size and loading speed of images. 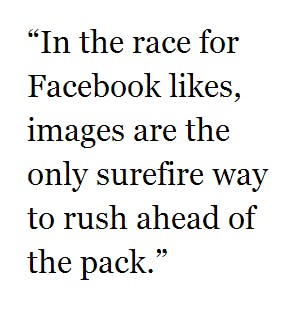 This was supposed to make your visual connection with friends more real and more personal. But the effect has been to box out textual status updates, replacing them with photographs that usually aren’t personal at all. Instead, they’re memes and image macros nabbed from elsewhere on the Web, images that already dominate places like Reddit and, as such, are ready-made for viral explosion on Facebook in the form of likes and shares. Even former Star Trek star George Takei, the unlikely patron saint of Facebook pages, has collected 3.5 million fans thanks to a reliable output of repurposed images.

Meanwhile, Facebook holds the audience of legitimate brand pages ransom. In September of last year, the company changed the algorithm it uses to determine which posts pop into your news feed. The idea was to limit the amount of noise you’re barraged with on a daily basis, but its true effect has been to cut dramatically into a page’s reach. Angry page managers have estimated the change has reduced their audience by anywhere from 24 to 63 percent. For many, the only recourse left is to pay hard cash to promote a post, which could cost upwards of $700,000 a year for those with a high volume of updates.

Short of bankrupting themselves to pay to reach their own audience, pages have just one other solution. Facebook’s new algorithm rewards engagement (shares and likes), meaning that a successful post needs to build momentum like a snowball. As Stylish Eve and others like it prove, in the race for Facebook likes, images are the only surefire way to rush ahead of the pack.

Take a look at Facebook’s most talked about pages and you’ll see how true that is. The list is generated by social media analytics firm PageData. Stylish Eve’s Dresses page usually hovers near the top, but it’s not alone. Its cohorts and competitors all function on a similar image spam business model.

One notable example is a loose confederacy of “teen” pages, spearheaded by something called “Teen Swag.” They’re run by anonymous admins who may not be teens at all and post a predictable stream of silly photographs and mindless directives to “like” and “share” everything. The pages propagate with the idiot psychology of a chain letter. They’re littered with spam.

That isn’t to say that Stylish Eve, the teen spam pages, and other content farms are necessarily of a lower cultural value than everything else on Facebook. Liking your buddy’s status update about how he went on an all-night bender for his birthday is not an action of serious emotional or intellectual substance, either. But Facebook is supposed to be about real people—about all the stupid, wonderful, shitty, brilliant, and boring things we do every day.

Update: Starting around Feb. 16—more than two weeks after our original story published and as we were reporting on this follow-up—Stylish Eve’s flagship Facebook page, Dresses, abruptly changed its posting style. The page now uses images taken only from Stylish Eve’s own Polyvore account. The posts still do not link to purchasing, brand, or item info. Stylish Eve’s other spam properties on Facebook continue to post unsourced and uncredited photographs.