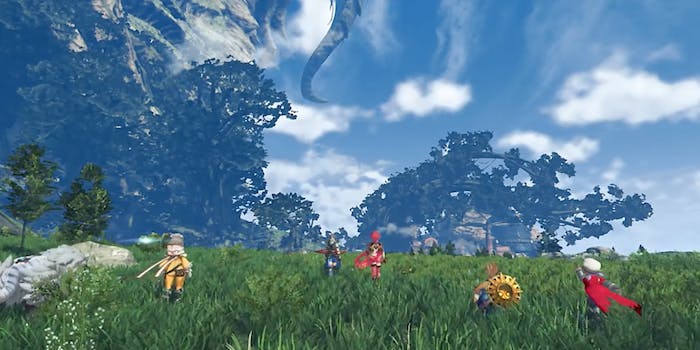 Xenoblade Chronicles 2 on Nintendo Switch is bigger than anyone expected

Get ready for a year's worth of extra content—for a price.

In its first year on the market, the Nintendo Switch is becoming the little gaming console that’s full of big games. First there was The Legend of Zelda: Breath of the Wild, a massive open-world adventure that gave players nearly full freedom to explore. The new Super Mario Odyssey is the biggest Mario game in years. The sprawling action-role-playing game Skyrim comes out Nov. 17. And today we learned Xenoblade Chronicles 2, the final major Switch release of the year, will have more content than anyone expected.

Xenoblade Chronicles 2 lands on Switch on Dec. 1. During a Xenoblade-centric Nintendo Direct presentation this morning, Nintendo offered loads of details it has been hanging onto since the game’s announcement.

A new trailer introducing the main characters and basic plot of the game, followed by a detailed look at the expansive game world, and information about how quests and combat works. If you’ve played a Japanese RPG in the past decade or so, you’ll feel comfortable here. The main takeaway is that Xenoblade Chronicles 2 will be a great big game, stuffed full of things to do.

One thing fans weren’t expecting was the last tidbit Nintendo added at the end of the presentation: a roadmap for Xenoblade Chronicle 2‘s downloadable content, which is planned through fall 2018.

Players can preorder all the DLC now by buying a $30 expansion pass. It includes new items and quests coming in December and January, plus new gear, a new mode, and “a brand-new story and adventure” landing each season through Autumn 2018. Unfortunately, you can’t buy these DLC packs individually. It’s all or nothing.

We don’t have many details about the DLC yet, so you might want hold off on ordering. But that’s typical for expansion passes these days.

Additional announcements included a pair of free downloads. One is a Rex costume (the hero of Xenoblade Chronicles 2) will be available for Link to wear in Breath of the Wild on Nov. 9. You’ll also be able to download a full Japanese audio track for Xenoblade the day it launches.