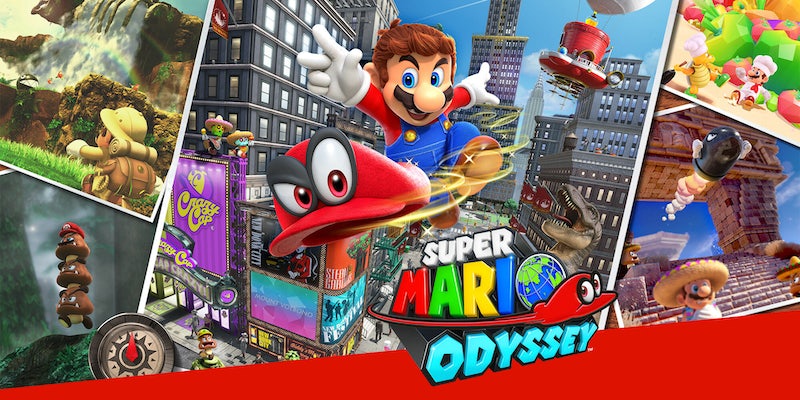 Super Mario Odyssey transports you to a series of wonderful, wacky worlds

Nintendo's memorable mascot embarks on a grand adventure in this consistently fun game.

How can a Mario game feel surprising in 2017?

This question hangs over every moment of Super Mario Odyssey. The biggest exclusive yet for Nintendo Switch, Odyssey shares the most DNA with beloved Super Mario titles like 64 and Sunshine. Rather than the course-based platforming of recent installments like 3D World and 3D Land, this game brings back open-ended puzzles and far-reaching environments. Coupled with the grab-and-go revelation of the Switch’s hardware, Odyssey excels as a thrilling, delightful journey beyond the Mushroom Kingdom in a major change for gaming’s most iconic hero.

Even from the explosive opening, Odyssey declares itself a different Super Mario game. Skipping any storybook setup, this adventure picks up immediately in the middle of a climactic duel with Bowser. The Koopa King has captured Princess Peach again and is more dedicated than ever this time, decked out in full wedding regalia. It’s not a spoiler to reveal that Mario loses this introductory duel, and is left beaten and broken without his iconic red hat.

You then quickly meet Cappy, the game’s true heart and soul. The sentient tophat provides tons of personality as well as the most exciting new gameplay mechanics.

Mario’s repertoire of attacks and actions has never felt better to control. He rolls, vaults, and leaps over enemies with ease and grapples to precarious ledges with precision. But now, tossing out Cappy strikes enemies and collects coins from afar, breaking up the routine. This mostly works like a boomerang, but certain combos allow you to lock onto nearby foes or keep Cappy spinning to knock out obstacles. Cappy’s helpful presence also grants the ability for an extra bounce, wherever you happen to be.

There are few instances where imprecise controls frustrate, but this plucky plumber moves freely for the better part of the campaign. A strange reliance on motion controls makes Odyssey best played on a big TV, where the colors pop and you can hold each Joy Con in one hand.

Thanks to his new friend, Mario can now temporarily possess certain enemies and objects in the game at the drop of a hat. Captures stand out as the most unique gameplay shift present in Odyssey. By simply tossing Cappy at an unsuspecting target, the player snaps into control. The first instance of this new power makes for a funny story beat, with an over-the-top transformation and reaction from Mario as he comes to in the body of a frog.

The ability to take over certain creatures is simultaneously the most exciting and underwhelming aspect of Super Mario Odyssey. While stomping around as a massive T-Rex is one of the game’s best sequences, it’s just that—a sequence.

As you tour around the world in pursuit of Bowser, you visit a range of colorful Kingdoms. Each offers new things to capture and different environments to explore, but it can feel like certain features are only meant to be flashy distractions. Too many of Mario’s captures are only used once, or so briefly they have no significant effect on the course of the overall adventure. Thankfully, the total number of interactions is high enough to make each Kingdom a fresh experience.

From the industrial waste of the Wooded Kingdom to the sun-kissed glow of the Seaside Kingdom, each new area is packed with surprises to uncover. The story does push you along at a brisk, linear pace from time to time, but you should be more than able to comfortably roam around and dig for hidden alcoves, challenges, and characters. Mario’s main objective on each visit is to find and collect as many hidden Power Moons as possible. These can be snagged in an impressive amount of ways, from completing tasks for townsfolk to finding secret retro puzzles. But while each Kingdom appears to be a wide, open space, the story blocks off certain sections and makes you miss the unrestricted joys of a game like Breath of the Wild.

It’s not that Super Mario Odyssey ever holds your hand, but it feels slightly afraid to let you run free in a limitless sandbox. Certain objectives goad you along a fixed path, require a certain amount of Power Moons to open up, or rely on post-game mechanics to keep you from getting somewhere before you’re ready.

Moons can be obtained by simply moving the story forward, but also in looking for a myriad of bonus challenges. In addition to the puzzle-based collectibles, each Kingdom has Moons available for purchase from a slot machine minigame, by dressing up in a new outfit, or from collecting scattered goods. A special currency can be found at every new destination as well, unlocking rewards themed around that locale. There is no shortage of things to collect, with each Kingdom offering even more Moons to find only after the story is cleared.

Traversing the skies, grabbing Moons, and discovering secrets quickly proves to be a simple but rewarding loop. No single Kingdom feels like a slog to get through, though a handful of brief segments annoyingly rob you of your powers. Constant discovery defines the core adventure of Super Mario Odyssey, and it’s a thrill to watch everything unfold.

Longtime Mario fans can expect a great deal of moments that will make their jaws drop and eyes widen with delight. Odyssey isn’t afraid to get weird, with oddly photorealistic environments and enemies, as well as some astonishingly large-scale boss fights. Likewise, the worlds that open up after finishing the story are impressive to see and add an incredibly significant chunk of content.

With hundreds of Power Moons to collect, an entire wardrobe of outfits that span Mario’s storied history, and no shortage of Easter eggs to uncover, Super Mario Odyssey is one of the most complete packages Nintendo has ever offered. This experience will keep you busy for a long time if you want to see everything, and you’re going to want to do just that. Trailers and demos mostly focused on the surreal setting of New Donk City, smartly keeping the majority of Mario’s adventure in the dark. Odyssey is best experienced with its secrets preserved, and the less you know about going in, the better. Even if you think you know what to expect in this globe-trotting journey, you’re going to find plenty you didn’t expect, and something new to love.

Super Mario Odyssey is available for the Nintendo Switch on Oct. 27.

Disclosure: Nintendo provided a copy of Super Mario Odyssey for this review.