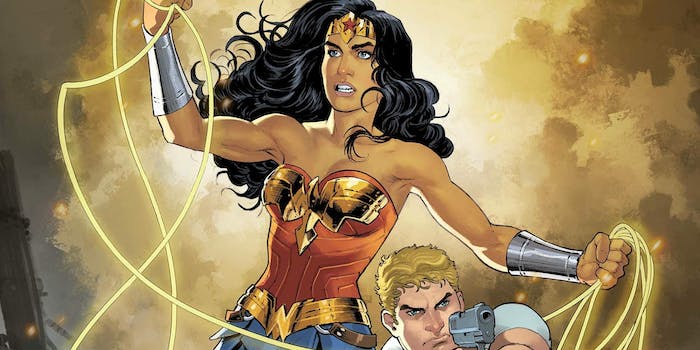 'We are going to Themyscira.'

Wilson confirmed on Twitter that she isn’t leaving Marvel; she’s freelancing for both publishers at once. So for the time being, it looks like she may continue to write Ms. Marvel as well. Her Wonder Woman run will begin with issue #58 this November, kicking off a new storyline called “The Just War.”

“When Steve Trevor’s unit goes missing in an Eastern European country torn by revolution, Wonder Woman immediately flies across the globe to help him—only to slam into the brick wall that is Ares, the God of War, who’s taken a strange interest in this conflict. But why is Ares acting so strange? Has he turned over a new leaf? Does Wonder Woman have a chance to redeem him? And just as important…if Ares has returned to Earth, then what happened to the supposedly unbreachable prison built to contain him—Wonder Woman’s homeland, Themyscira?”

This sounds like a good premise for fans who fell in love with Wonder Woman after seeing the movie and want to start following the comics. Unfortunately, the same can’t be said for the past year of Wonder Woman comics. Written by James Robinson, the current series has been met with mixed reviews. Many fans dislike Robinson’s decision to focus on male characters like Wonder Woman’s brother Jason, so G. Willow Wilson’s takeover will be a welcome change.

As well as being an exciting new direction for Wonder Woman, this is a high-profile career move for Wilson. It’s also a little surprising in an inside-baseball sense for the comics industry, because star writers and artists are usually locked into exclusive contracts with one publisher or another. This means that Wilson isn’t exclusive to Marvel, and DC was able to poach her for one of its top comics. In a similar vein, Marvel recently lost one of its biggest names, Brian Michael Bendis, to an exclusive contract with DC.

Wonder Woman’s The Just War storyline will begin with issue #58 on Nov. 14.