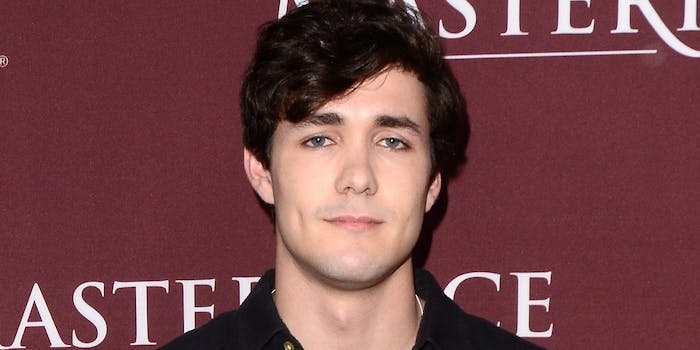 The English actor is set to play the role in the 'Little Mermaid' live-action remake.

I mean at this point I was prepared for Prince Eric to be played by an audience member for each film screening to incorporate crowd participation.

Though relatively young and not very well-known, Hauer-King has already worked alongside some high-profile actors. The 24-year-old English actor worked with Danny Huston in the British drama The Last Photograph in 2017. More recently, Hauer-King starred in A Dog’s Way Home with Ashley Judd and Bryce Dallas Howard, and The Song of Names with Tim Roth and Clive Owen.

In addition to his acting chops, Hauer-King has quite the voice, which fans are excited to hear more of alongside Bailey. Clips of Hauer-King singing “Hallelujah” are circulating on Twitter, and the full video has over 15,000 views on YouTube.

this princess ariel with this prince eric? count me in pic.twitter.com/zC8h2d0OiY

Disney fans are sharing their excitement on Twitter, as many are thrilled with Disney’s casting choice. Twitter user @ifsbrighternow called Hauer-King “dreamy” and “very Prince Eric-like.” Some are predicting this role will kickstart Hauer-King’s career.

i’m not mad, he’s cute and dreamy and very prince eric-like, i’m sure Jonah Hauer-King is a name we’re gonna be hearing for a while from now on https://t.co/lKCL666gfG

But not everyone is thrilled over this announcement. The decision to cast Hauer-King came after talks with Harry Styles fell through, and some Harry Styles stans are still disappointed they won’t be seeing the former One Direction member as a Disney prince.

Much of the casting was announced in July, when controversy arose over the decision to cast Bailey as Ariel. Bailey has since responded to backlash and told Variety at the Power of Young Hollywood gala, “I just feel like this role was something bigger than me and greater and it’s going to be beautiful. I’m just so excited to be a part of it.”

As for the rest of the cast, Melissa McCarthy is set to play Ursula and Javier Bardem will play King Triton. Awkwafina will voice Scuttle, Jacob Tremblay will voice Flounder, and Daveed Diggs will voice Sebastian. According to the Hollywood Reporter, Disney is currently planning to start filming in early 2020.