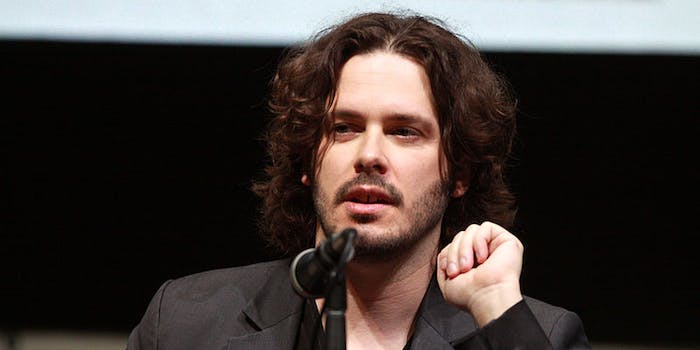 In a very surprising move, Marvel Studios has announced that Edgar Wright is stepping down as director of Ant-Man.

“The studio and director have parted ways on Ant-Man due to differences in their visions of the film,” read Marvel and Wright’s joint statement. “The decision to move on is amicable and does not impact the release date on July 17, 2015. A new director will be announced shortly.”

This is weird news, to say the least. Ant-Man may not have started filming yet, but Wright has been signed on to the project since 2006. He co-wrote the script with Joe Cornish (Attack the Block) and the movie is already in pre-production, with most of the main cast revealed several weeks ago.

Just one day after this announcement, Cabin in the Woods director Drew Goddard dropped out as director of Marvel’s upcoming Daredevil Netflix series. This could just be coincidence (after all, Goddard is directing the Spider-Man spinoff Sinister Six, so this may just be a scheduling conflict), but it’s still bad timing.

Wright’s decision to leave Ant-Man is an ominous sign, particularly when you know that he’s been working on the movie for the best part of a decade.

Marvel Studios goes out of its way to hire visionary, non-traditional directors for each of its movies (Kenneth Branagh for Thor; James Gunn for Guardians of the Galaxy, Shane Black for Iron Man 3), but it also requires those directors to follow very strict guidelines when portraying certain aspects of the Marvel Cinematic Universe. Inevitably, this leads to conflicts.

In the past, numerous actors and directors have fallen by the wayside due to Marvel’s strict adherence to its overarching vision.

Mickey Rourke was dissatisfied by the way his scenes were edited in Iron Man 2. Edward Norton was so unhappy with The Incredible Hulk that he was replaced by Mark Ruffalo for Avengers, and reputedly refused to publicize his own movie. Patty Jenkins (director of Monster) was originally hired to direct Thor: The Dark World, but dropped out due to creative differences. Then there’s the issue of actors like Chris Evans who may want to leave the franchise, but who are tied into multi-film contracts.

Now it looks like Edgar Wright has joined this ever-growing list, with Drew Goddard as another possible addition.

The loss of Edgar Wright is a blow to Ant-Man. For many fans, his pedigree as the director of films like Hot Fuzz and Scott Pilgrim vs. The World was the main selling point for the movie. After all, Ant-Man is the latest in a very long line of Hollywood-typical white male heroes, and his superpower is the ability to change size and talk to ants. Not as exciting as the idea of a Black Widow movie, for sure.

Edgar Wright’s genre-savvy humor was a perfect fit to make Ant-Man interesting. Wright may not be a big name in Hollywood, but he has geek culture icon status thanks to the “Three Flavours Cornetto” trilogy, which Avengers Joss Whedon referenced in a supportive tweet following Friday’s announcement.

Marvel Studios’ success is determined by its ability to control an ever-expanding universe of interconnected media franchises. Instead of being beholden to the editorial input of a major studio like Warner Bros. or Fox, Marvel is an indie production company—albeit one with an enormous budget.

So far, Marvel’s Cinematic Universe has been enormously successful, both with critics and at the box office. And part of that success is due to their habit of hiring unusual directors based on their own vision for a particular superhero. For example, Captain America: The Winter Soldier was helmed by Anthony and Joe Russo, who were previously known for their work on Arrested Development and Community.

The downside is that while these directors turn out really great movies, they also have to include certain story elements that tie into other parts of the MCU. In the case of Edgar Wright, it looks like these conflicting interests went too far. After almost eight years of work on Ant-Man, he will be replaced by another director, and his screenplay will likely be rewritten to toe the Marvel company line.

We probably won’t find out what really happened until after the movie is released. Rumors suggest that Wright was unhappy with script rewrites from Marvel’s in-house team, but neither he nor Marvel Studios have elaborated past their joint statement on Friday.

This shotgun divorce indicates that Ant-Man may wind up with a “written by committee” feel, with a new director and new rewrites being introduced far too late in the game. The one ray of hope is the fact that co-writer Joe Cornish is staying with the project, although who knows how much influence he will have once filming begins.