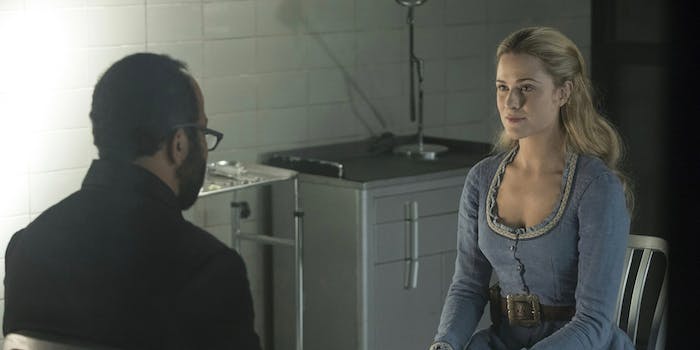 After Westworld introduced a new landscape in the Cradle—the hosts’ virtual backup center located in the Mesa—and brought back Robert Ford, who was shot by Dolores last season, many fans walked away feeling confused. But “Les Écorchés” doesn’t leave fans hanging for too long as its several storylines come to a head.

Ford’s, Delos’, and Dolores’ master plans are all laid on the table as the chess pieces begin to move. The episode is mostly a flashback to the showdown at the Mesa that’s bookended by the present-day as Charlotte, Stubbs, and Strand all discover that Bernard is a host. But as we saw, the closet full of Bernard hosts is the least of everyone’s problems, considering what just happened (and what will come in the three remaining episodes).

As for what any of that means? It just takes some going into Analysis Mode.

The true nature of Westworld

Ford’s first appearance in “Les Écorchés” is marked with the quotation of the William Blake poem “Auguries of Innocence.”

“To see a World in a Grain of Sand

And a Heaven in a Wild Flower

Hold Infinity in the palm of your hand

And Eternity in an hour”

The idea of living forever is present throughout the episode, and in a manner of speaking, Ford has achieved it. Before Ford’s death, he had Bernard print out that data and upload it to the Cradle, which we saw him collect in “The Riddle of the Sphinx.” Digitally, Ford is as sharp as ever, but because Delos is still no closer to achieving the ability to successfully upload human consciousness into a host, Ford says he would deteriorate in a matter of days if he were to be brought online in the real world.

On one hand, Delos is trying to reach that goal, and as Ford notes, it’s not necessarily because Delos ever wanted to achieve immortality. But they’re also trying to evolve humanity and become hosts themselves, and it’s something Delos has been preparing for. Just look at Sweetwater, a town that hasn’t changed much in over 30 years. There’s a reason for that, and it’s all in the data.

As far as whether Delos will achieve that goal is another question. By the end of the episode, Delos is still no closer to obtaining Peter Abernathy’s mind, which is no longer attached to its host thanks to Dolores.

Why Dolores was running tests

Last week’s reveal, on top of our introduction to the Cradle, made us question the very nature of what we thought we were seeing. The tables have turned between hosts as the show revealed Bernard was the one being tested, but there was a good reason for that.

Since Arnold’s death took place prior to Delos’ mission to recreate humans as hosts, Ford couldn’t perfectly recreate his old friend’s mind when he designed a host to look and sound like him. So he relied on memories from the two people who knew him best: himself, and Dolores. Bernard isn’t Arnold, but he’s as close as he could get with the technology available to him.

Bernard and Dolores (as the host testing him) spent years together in the house that Arnold built within the Cradle until Bernard could fool Dolores, but because Dolores couldn’t be fooled easily, they were then kept apart.

The hosts may now be on their final life

Dolores may have rammed a train into the Mesa, but she had other plans in mind after she and her army of hosts entered the site. For one, she wanted to unlock the key in Abernathy, which ultimately involved removing his mind containing the large data files Delos uploaded there. But there was an even bigger target.

The Cradle is the ultimate system in Westworld, one that stores all of the hosts’ backups. Without those backups, the hosts can’t be brought back once they die.

Charlotte uses Delos’ hold on those backups as leverage to taunt Dolores, noting that she has that information locked away so that Dolores can’t access it. But Dolores is less interested in having Delos’ data—outside of what Abernathy has in his mind—and more in wasting it away.

Thanks to Angela destroying the Cradle, all of their backup data is gone. And from what it appears, if a host dies, they die for real this time. They’re no longer stuck in an eternal loop. They finally have what humans have been trying to escape all this time: mortality.

“Now we’re truly free,” Dolores said after the explosion, and it’s only a matter of time before we see if the hosts will regret making that move.

Ford giveth and Ford taketh away

With the launch of his narrative at the end of season 1, Ford gave all of the hosts the ability of free will. Since then, we’ve seen the hosts in varying states of being awake, ranging from the hosts of Shogun World to Dolores’ discovery of the maze, with others (such as Lawrence) only recently finding out the truth.

But for the first time, we saw that the version of Ford who lived in the Cradle is even more powerful than a memory: He can take that power away, and once again it’s poor Bernard who experiences that the hard way.

“Your very nature, Bernard, ensures they will devour you and all the beauty of who you are, of who you could be poured out into the darkness forever. Unless we open the Door,” Ford said before taking free will from Bernard.

As Bernard’s mind is returned to him after his experience from the Cradle, all of the blocks in place in the Cradle’s system disappear, but Ford is right beside Bernard as both a physical manifestation (to the audience, at least) and a mirror image. Others can hear Bernard speaking to Ford, but they can’t hear Ford’s responses. And like with the murder of Theresa last season, Ford once again had the ability to order Bernard to kill others for him. And despite the protests, Bernard does.

But that was only one instance involving a few people. Ford clearly has something bigger at work and he needs Bernard to do it, and it likely involves Bernard doing even more things that he clearly doesn’t want to. But it could also help explain Bernard’s memory lapses as well as one of the more mysterious scenes from the season 2 premiere: Is Ford’s control how Bernard killed all of those hosts in the lake?