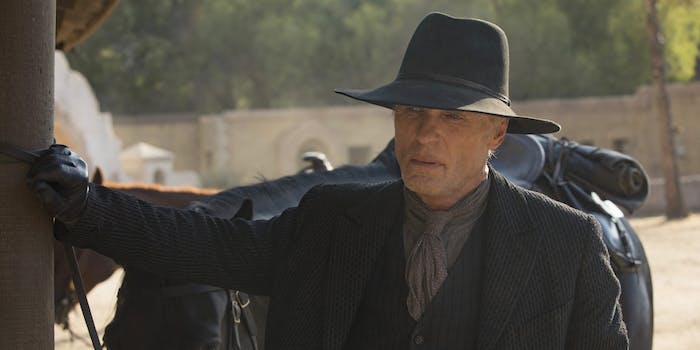 ‘Westworld’ pulls back the curtain on Delos’ end game

It could change everything.

Warning: This article contains spoilers for the most recent Westworld episode, “The Riddle of the Sphinx.”

The motivations of Delos Inc.—the mysterious corporation that owns Westworld, the Raj, and other parks in the HBO series—has driven some of the show’s major mysteries beyond the theme parks for much of season 2, but fans got their biggest look yet at just what Delos wants with Westworld.

Like last week’s episode, “The Riddle of the Sphinx” opens with an extended look at a brand new location. In a scene that’s slightly reminiscent of Lost, Jim Delos (Peter Mullan) goes through all of the motions of a daily routine before he’s visited and interviewed by his son-in-law, a young William (Jimmi Simpson). James Delos goes through the motions, but he wonders why he has to answer all of these questions. They’re—William doesn’t specify who—looking to establish a baseline for “fidelity,” William tells him.

“So what’s the idea?” Jim asked him. “That afterwards you and I have the exact same conversation? Seems little far-fetched, doesn’t it William?”

As it turns out, Jim isn’t too far off the mark as Westworld dropped its biggest bombshell yet.

During the episode, we twice return to the apartment where Jim Delos is being held. He goes through the same routine each time we see him, and his conversation—down to his skepticism about establishing fidelity through his interview with William—also plays out similarly. The second time, we discover what happened to Jim Delos: He’s been dead for seven years, and his mind has been uploaded into a host that looks and sounds just like him.

By the time an older William (Ed Harris) encounters him, he’s able to stay online much longer, but the end result is the same. His mind begins to deteriorate, and not only does he begin to shake, he loses his ability to speak coherently.

Westworld doesn’t go into detail about how Delos, Inc. created him or how his memories were uploaded into the hosts, but it could explain why Delos, Inc. has been collecting guest DNA. It’s possible that Jim Delos isn’t the only test subject.

Although fans have been theorizing about Delos making hosts from guest DNA for weeks now, Westworld fans will recognize this new development from Futureworld, the sequel to the Michael Crichton film Westworld. Considering Delos’ experiments have been in the works for decades (William ages so much that Jim no longer recognizes him by the third visit), it’s unlikely that Delos’ main goal is directly aligned with the film’s motives.

Instead, the selling point—at least for now—appears to be a much simpler one: the ability to live forever. It’s the kind of technology certain people would pay millions or more for if Delos can make it work.

Except there’s one problem. Delos has yet to make it stick. At some point, whether it’s Day 7 or Day 35, Jim begins to degrade. He loses the ability to form his words and starts shaking. And then Delos has to scrap what it has and start over. Even after decades and 149 tests, they still can’t quite make these hosts last long-term, even though William wagers that Delos might figure it out soon.

“The engineers call it a ‘cognitive plateau,’” an older William explains. “Your mind is stable for a few hours, a few days, and starts to fall apart. Every time. Now first we thought it was your mind rejecting the new body, like an organ and it’s not a perfect match, but it’s more like your mind rejects reality. Rejects itself.”

Although some fans may point out that Jim Delos isn’t the first host to be based on a real person—that distinction (at least, as far as we know) goes to Bernard Lowe (Jeffrey Wright)—there is a major difference between the two. Bernard looks like Westworld co-founder Arnold Weber and shares certain traits, but Bernard has never been Arnold; those quirks and his backstory were all programmed by Robert Ford. Jim Delos, on the other hand, is an extension of the man himself.

“Besides, if you aim to cheat the devil, you owe him an offering,” James Delos said.

The key could lay in the mind of Peter Abernathy

The two times that we see William interact with a host version of his father-in-law, the start of his degradation is marked with the revelation that he is not real. Jim can handle it on the surface level, but it’s almost as if the very structure of his mind isn’t able to process it.

The first time (around seven years after his death), Jim learns that his wife died from a stroke. The second time around, William cuts him to the core by revealing that his daughter Juliet killed herself and his son Logan died of an overdose. William coldly lays out the cruel reality of what Jim is, and how maybe someone like him shouldn’t get to live forever.

William wagers that the engineers are close to discovering how to make someone like Jim last long-term. And although he’s having second thoughts, it may be something that Delos, Inc. may still be very interested in pursuing. It might even be worth allowing nameless guests and important executives to die in Westworld at the hands of its hosts if Delos discovered that information and uploaded it into the mind of a host to smuggle out. Something of that nature would definitely warrant an exclamation of “Oh my God” from Bernard.

Sure, it might ruin Delos’ reputation, but for Delos, it’d probably be worth it if it could offer a tangible solution to human mortality.

Does this explain why William is so hellbent on finding the park’s riddles?

By the time that the older William speaks with the host version of Jim, he’s become disillusioned from his earlier views that parks like Westworld are only a front for what they could really market and sell. His wife is dead and his daughter hates him. He sees what the technology of Westworld can do, but it keeps bringing back his father-in-law, who he describes as a “ruthless philanderer with no ethics in your business or family dealings.”

“Another year or two, they might crack it,” William tells Jim. “Get a version of you that’s viable long-term. But the thing is, I’m not so sure anymore. I’m beginning to think that this whole enterprise was a mistake. People aren’t meant to live forever.”

William’s been haunted by Westworld for more than 30 years now, but he keeps returning despite knowing the true facade. He tracks those mazes and tries to get to the bottom of Robert Ford’s many puzzles. And while he does take out his anger and frustration on Jim (and makes him linger instead of getting a quick and fiery death), Westworld could hold even bigger answers: Despite everything he’s put into it, he could finally shut it all down.

And if that’s the case, he and Dolores might find themselves agreeing more than they might know.