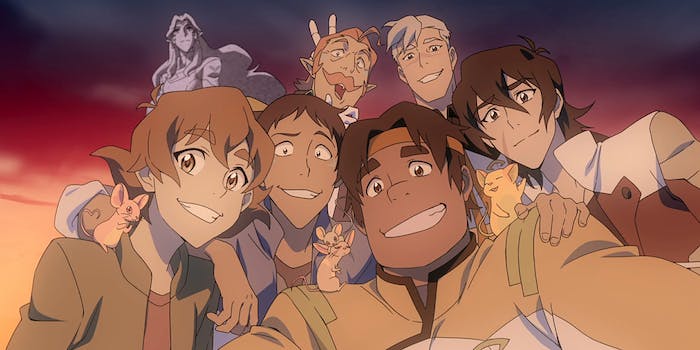 Fans of the popular DreamWorks animated series Voltron: Legendary Defender are petitioning for more queer representation. The show’s final season, available to stream on Netflix, included a bare nod to LGBTQ fans in the epilogue. For a show initially thought by fans to be the exception to the rule, this came as a heavy blow.

Several petitions are demanding that DreamWorks allow the showrunners full power over the show. One, created only a few days ago, asks that a different version of the final season be released. It’s unlikely this would ever happen, but the fan activism speaks to how upset the community is about the series.

“We are aware that this was not the original plan that the showrunners had for season 8,” the petition‘s creator, Allison Bugenis wrote. “And we deserve, as an audience who truly loves the show and characters, to know what their vision and story was without the executive meddling that ruined the final season.”

It’s unclear what executive meddling the petition is referring to, but a showrunner did apologize in August for how the series treated a gay character.

The petition, which already has more than 16,000 signatures, notes an underdeveloped and disappointing conclusion of the show. A GeekDad article written by an LGBTQ fan agreed, lamenting, in particular, the sloppy handling of gay character Shiro‘s “happy ending.”

“Shiro abandons his hard-won title of Defender of the Universe to find ‘happily ever after’ in the arms of a barely-named incidental,” Sean Z writes.

Another petition, created in September 2018, pleaded with DreamWorks to “Give the Voltron writers the green light! Give us LGBT representation!” In the summary, Evelin Gomez explained that season 7 greatly disappointed fans with its queerbaiting.

“This is 2018; children deserve to see themselves represented in shows,” she wrote. “Children should be able to feel normal, no matter their sexuality. It’s not fair for them to see that only heterosexuals live happily ever after and homosexuals get killed off.”

As Sean Z explained in his article, the trope of introducing and hyping gay characters only to later marginalize them is common in many shows, particularly animated ones. Even shows like The Legend of Korra are known for hinting toward a gay relationship but never letting the romance develop—or even be seen. Post-finale confessions of potentially gay characters are common, but dissatisfying to fans hoping to see some representation in their favorite shows.

The issue of queer representation is not the only problem with Voltron. Many fans felt that the last few seasons displayed a decline in general quality, and felt that a show they had come to love had dropped the ball. A quick Google search will reveal numerous petitions to seize control back from executives and hand it to showrunners, who fans agree are not to blame for the decline.

Voltron built up a passionate fan base through beloved characters and genre-breaking storylines. The most recent seasons abandoned all of that, fans say, leaving many feeling betrayed and dissatisfied.