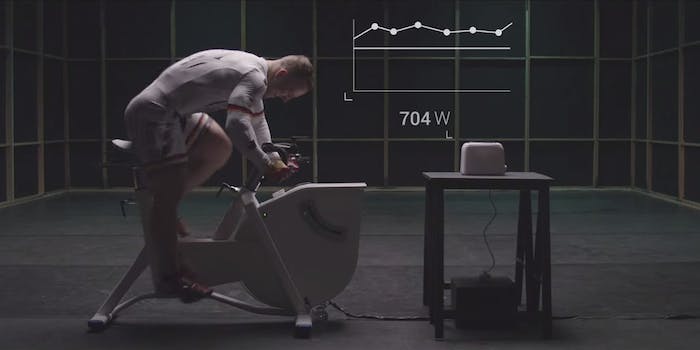 Can this absurdly buff cyclist generate enough energy to power a toaster?

Apparently it's not as easy as it looks.

To demonstrate how much energy humans consume versus how much we can generate, students at the Stockholm Academy of Dramatic Arts decided to enlist German track cyclist Robert Förstemann and his 29-inch (74 cm) thighs. The goal was to generate enough energy via a specially-designed stationary bicycle for a long enough time in order to power a 700-watt toaster and make a piece of toast.

Despite the seemingly easy challenge, Captain Quadriceps over here pretty much maxed out his heart rate trying to maintain the lightning 31 miles per hour speed necessary to keep the toaster running for a few minutes. For comparison, that’s 5-10 miles faster than the average speed riders maintain in the Tour de France.

Using the same man-powered energy machine, you would need 180 Roberts to power a car for one hour. One hour! You’d need 43 thousand Roberts for a single hour of flight for a passenger airplane.

This shows just how precious energy is to maintain the things we take for granted, like our kitchen appliances. Now if we could just get that energy to be clean and sustainable, we’d be golden.