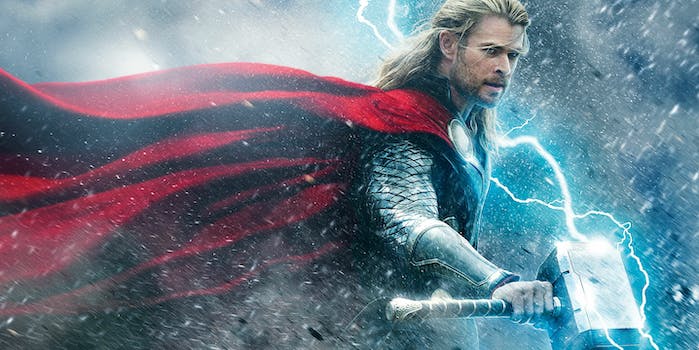 Thor’s hammer might seem like just another superhero accessory, like Batman’s grappling gun or Wonder Woman’s Lasso of Truth. Unlike those heroic paraphernalia, there is a lot more to Mjölnir than you might think.

For decades, Thor has become a popular mainstay of Marvel comics. He was a founding member of the Avengers, and starred in multiple comics titles before getting his own long-running series. His hammer, like any reliable friend, has been with him ever since. Mjölnir has proven to be an essential part of who Thor is over the decades in comics, cartoons, and live-action interpretations.

Mjölnir has an origin story that could earn its own spin-off movie. Over the decades, the hammer has had a few different origin stories. The most recent version, as well as the one utilized in the Thor movies, explains that Mjölnir was forged in the heart of a dying star.

There’s actually a lot more to the story. The hammer was forged by dwarven blacksmiths named Eitri, Brok, and Buri. In the comics, Odin commanded the blacksmiths to construct a deadly and powerful weapon for Asgard. To do this, the blacksmiths summoned a magical forge located in the heart of a star. There, they painstakingly forged Mjölnir out of Asgardian metal. This metal is so indestructible, it would give Wolverine’s adamantium claws a run for their money.

The creation of Mjölnir wasn’t just magical—it was also intense. So intense, actually, that Earth was nearly destroyed in the process. (Of course that would’ve made for a really short comic book.) The explosion caused by Mjölnir’s creation was so deafening it wreaked havoc on Earth and ended up causing the mass extinction event that took out the dinosaurs in the Marvel universe.

Fortunately for Marvel’s heroes, Earth survived the blast. With Jeff Goldblum’s appearance in Thor: Ragnarok, it sounds like life found a way after all.

You read that correctly. Thor and his hammer, Mjölnir, were initially introduced by artist Jack Kirby in the 1942 short Adventure Comics, a subsidiary of DC Comics. That was two decades before he was a Marvel superhero.

In the comic, Thor and his trusty hammer “Mjolnar” fought against the villain Sandman. Kirby liked the concept of Thor so much that he officially inducted Thor into the Marvel universe in the 1962 comic Journey into Mystery, for which Kirby shared credit with Stan Lee. The rest is Marvel history.

4) Thor is kind of a wimp without his trusty hammer

If you’ve seen Marvel’s Thor, you’ll remember that Thor was relatively useless without his hammer. It took him learning humility to earn the right to wield Mjölnir, and that is when he became Thor. Thor’s armor, his ability to fly, his ability to command lightning—yup, all because of the hammer.

Yes, Thor is very strong and exhibits great physical pose. However, Mjölnir is an essential part of what makes Thor… well, Thor. This is what separates Mjölnir from the gadgets on Batman’s utility belt. In the comics, Batman often fends for himself when his utility belt is taken away by criminals and villains. Wonder Woman still has superhuman strength when she’s without her lasso.

Thor’s demigod status makes him hard to hurt, but his offensive moves are rendered almost useless without Mjölnir, which is the best argument for why the hammer is such a quintessential part of who Thor is.

5) In the MCU, Thor finds his inner strength after losing Mjölnir

Remember what we said about Thor needing Mjölnir to do anything super-heroic? Well, that idea got turned on its head in Thor: Ragnarok, the third solo movie in the Thor franchise. In Ragnarok, Thor’s sister Hela, the goddess of death, crushes Mjölnir, creating a serious identity crisis for our hero. Thor spends a good portion of the movie mourning the loss of this weapon, before his father, Odin, reveals that his lightning-harnessing powers come from his connection to Asgard, not his hammer. Mjölnir was just a way for Thor to channel his strength. Still, you can’t help but feel a little sad that the trusty Mjölnir is no longer by Thor’s side—at least in the Marvel Cinematic Universe.

6) Mjölnir can travel in disguise

In early iterations of the Thor character, he had an alter ego, and he’d sometimes come to Earth under the assumed identity of a doctor named Donald Blake. Thor could change his identity at will thanks to Mjölnir, while the hammer itself would transform into a walking stick for Blake.

In these early versions of the character, and in the more recent comic with Jane Foster, if the hammer is out of Thor’s grip for more than 60 seconds, Thor reverts back to the identity of a normal person. This part of Thor’s character, which has been an integral part of the comics for decades, was decidedly ignored for the films.

7) Thor isn’t the only one who has wielded Mjölnir

In Avengers: Age of Ultron, the Avengers have a light-hearted scene where each of them try to pick up Thor’s hammer. No one is able to do it—although pure-hearted Steve Rogers comes close. Later in a pivotal scene, the newly born Vision picks up the hammer and hands it over to Thor. It’s a small but important moment: Vision is able to show his worthiness to the Avengers, and most importantly to a stunned Thor.

In the comics, Vision isn’t the only one who has wielded Mjölnir. Captain America has proved his worthiness and wielded the hammer before, thus explaining why the film version of Rogers could almost do it in Age of Ultron. X-Men’s Storm, Odin, and most recently Jane Foster have all proved they are worthy enough to wield the mighty Mjölnir. Which brings us to Mjölnir’s current companion.

8) Jane Foster is the current wielder of Mjölnir

Thor has wielded Mjölnir in the comics for decades. However, after a recent comic book incident with Nick Fury, he was deemed unworthy to wield the hammer. The person who was deemed worthy instead?

While the dethroned old Thor sulked off under the moniker Odinson, the new female Thor took up his title and heroic ways. Her identity was kept secret to comic-book readers for a while until it was recently revealed. With Jane Foster wielding Mjölnir in the comics, the implications could be enormous. Chris Hemsworth will eventually step down as the mighty Thor in the Marvel Cinematic Universe, and having a female Thor in the comics could be a pathway for Natalie Portman, who plays Jane Foster in the movies, to wield the hammer—or even perhaps Tessa Thompson, who appears in the upcoming Thor: Ragnarok. When it comes to Mjölnir, the hammer gets to choose its master.

This point is a little complicated, because the event surrounding it was reversed in later comics. But we think it stands.

At the end of the Civil War comics arc, Captain America is shot and killed, precipitating a later Thor comic that revealed Mjölnir’s ability to summon from the dead anyone who has sworn an oath over the hammer. Thor uses this ability to bring Cap’s ghost back to say goodbye. Here’s the rub: A later comic reversed the storyline, saying that Cap wasn’t dead after all.

While we concede that means Mjölnir wasn’t necessarily used to bring Steve Rogers back, it doesn’t mean the hammer doesn’t have that ability.

Mjölnir is a powerful weapon, so it’s little wonder that duplicate hammers have popped up over the years in the comics.

Stormbreaker and Thunderstrike served as imitations of Thor’s hammer, wielded at times both by Thor’s allies and enemies. While they were formidable weapons that carried some of Mjölnir’s supernatural properties, neither really measured up to the original. Loki even created an imitation called the Stormcaster, which he used it in an attempt to control Storm, but was ultimately unsuccessful.