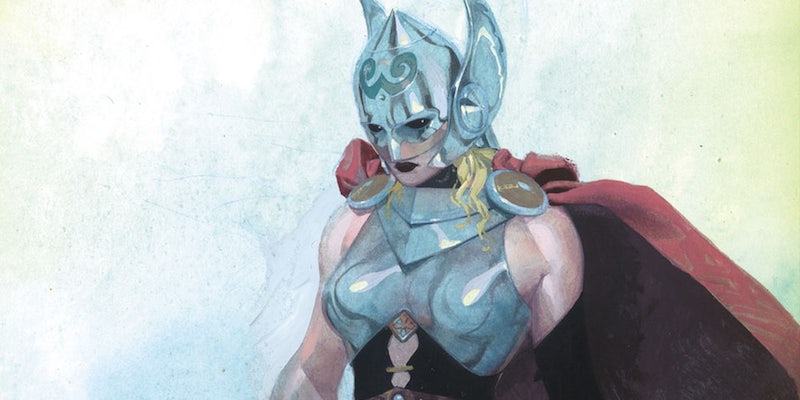 Marvel will genderswap ‘Thor’ according to announcement on ‘The View’

While it may sound big, the View's announcement that the new Thor will be a woman isn't really that, er, earth-shattering.

While it may seem like the “thundering” announcement heard round the world, when you take a step back, Marvel‘s reveal that Thor is going to be a woman in an upcoming issue isn’t quite the revelation many are claiming.

The news, coming to us courtesy of ABC’s The View, of all places, was vague to begin with. Although news of the upcoming debut caused plenty of heads scratching because of the choice of venue, the announcement went off well thanks to View hosts Whoopi Goldberg and Jenny McCarthy actually proving they can hold their own when it comes to talking about girls in comics. But if you’re looking for Thor to make waves with a groundbreaking changing of the guard, you might not want to celebrate just yet.

Here’s what we know so far. The new female Thor will apear in October in a new series, Thor, written by Jason Aaron and illustrated by Russell Dauterman. As you can see in this preview of the cover of the first issue, she means business. 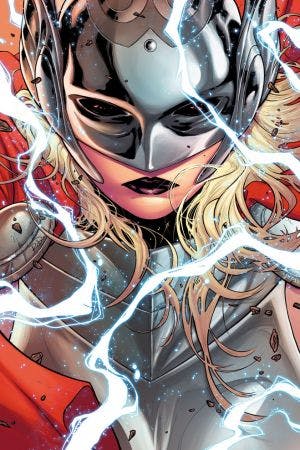 But what about the old Thor? Marvel’s press release tells us that he’s no longer able to wield the hammer that gives him his power:

No longer is the classic Thunder God able to hold the mighty hammer, Mjölnir, and a brand new female hero will emerge worthy of the name THOR.

The new Thor’s backstory, courtesy of McCarthy, suggests that it’s not quite as simple as a changing of the guard.

“The story behind her is that she created herself. She was saved by Thor, and she came down from Earth – followed him – and made herself look like Thor. And now she’s taking over.”

So what this all most likely means is that while the “real” Thor is off taking an Asgardian vacation, the new character, whose name we don’t yet know, is taking over the job.

This isn’t all that groundbreaking. The powers of Thor pass to whoever is deemed worthy of wielding Mjölnir, usually through acts of great bravery and selflessness. In the past, numerous female characters have picked up the great hammer, including Tarene, a.k.a. Thor Girl, and Black Widow.

What is unusual is that the new Thor is headlining a new series. While some readers have speculated that it could be a nice way to transition the Marvel Cinematic Universe to a new character once Chris Hemsworth’s contract as Thor is up, we’ve read too many comics to be anything but skeptical that the new character will take on the role for longer than a few issues. Still, Marvel is insistent that “this new Thor isn’t a temporary female substitute,” as editor Will Moss stated. “[S]he’s now the one and only Thor, and she is worthy!”

Marvel is certainly treating the news as a major shakeup in the world of the Avengers, calling it “one of the most shocking and exciting changes ever to shake one of the “big three” of Captain American, Iron Man and Thor.”

Female Thor arrives on the heels of S.H.I.E.L.D.’s Agent Peggy Carter getting her own TV spinoff. It’s also a possible precursor to the Captain Marvel movie and the Black Widow movie everyone wants. A Female Thor is arguably an even more radical switch for the Avengers franchise—if she sticks around—than a solo Black Widow movie would be. And given that nearly half of Marvel’s current readership is female, we’re long overdue for another female addition to the team.

So far, the news has sparked equal celebration and outrage among die-hard comic fans. On his Twitter, Ryan Penagos, the executive editor of Marvel’s Digital Media branch, smacked down the haters right and left.

@dimdullcold No, she’s just called Thor. And WTF is that we’re doing it and it’s awesome.

Elsewhere, fans cheered the new reveal. “My 4-yr old boy ‘AWESOME!’ & I love it too!” wrote comic fan and editor Natalie Ebnet on Twitter, adding, “He loves ALL Superheroes & he’s now picking out which of his little girlfriends will be able to dress up as Thor!”

While girls haven’t needed this excuse to cosplay Thor before now, it will almost certainly make it that much more fun.

Illustration by Esad Ribic via Marvel