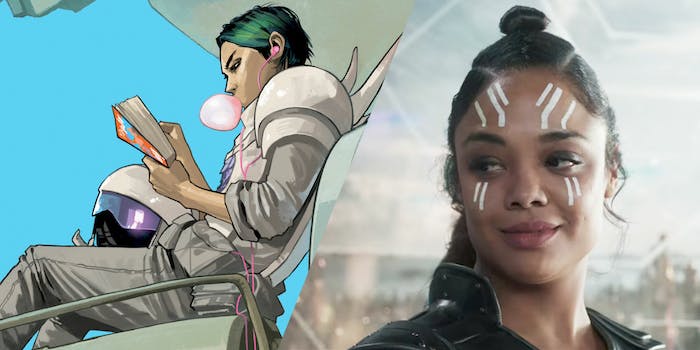 Tessa Thompson’s take on Valkyrie is among the many highlights of Thor: Ragnarok, but comic book fans are already envisioning her taking on a character from one of the decade’s best comic book series.

One fan suggested that Thompson would be perfect to play Alana in Saga, the award-winning space opera series from Brian K. Vaughan and Fiona Staples—and Thompson seems on board.

OH MY. i’m very *obsessed* with SAGA. That would be so dreamy. https://t.co/o6btPLvkEv

As vibrant and expansive as Saga is, it’s also a very much a heartfelt story. Alana and Marko, on opposite sides of a never-ending war between Landfall and its moon Wreath, are on the run after falling in love, getting married, and having a daughter, who serves as the comic’s narrator. The story often jumps between different times and parts of the universe, following several other characters including a teenage ghost-turned babysitter, a humanoid who has a television set for a head, bounty hunters, journalists, and talking cat named Lying Cat who can tell when someone is lying.

Thompson’s positive reply to the idea of her playing Alana spread quickly among Saga fans, and they already have a suggestion for who should play Marko, Alana’s husband.

OSCAR ISAAC. TESSA THOMPSON. SAGA.
Here is all of my money. I can get more. Wait here. https://t.co/qKuRpTz5KZ

Throughout the day, Thompson reposted support from fans and fellow creatives, including screenwriter Zack Stentz, who offered to write the film.

Some fans have already started Photoshopping and creating fanart of Thompson as Alana complete with the set of wings that Alana’s species has.

Couldn't stop for the night until I drew @TessaThompson_x as Alana from Saga. Cause she'd be AMAZING in that role. pic.twitter.com/fIg0xDqwaT

Although Thompson has expressed interest in playing Alana in Saga, there’s no guarantee that it will happen because the ongoing comic series has long been considered unfilmable by the comic’s creators. Vaughan was initially against the series ever being turned into a TV or a movie. He’s since warmed up to the idea, but still thinks the technology isn’t quite there. In an interview with CBR earlier this year, Vaughan had a more hopeful answer when asked about Saga ever being adapted—with a very understandable caveat.

“Maybe when the story is finished?” he said. “I think Fiona and I are both open to Saga possibly being translated into another medium someday, and we’ve gotten a lot of very flattering offers, but for the moment, we’re just concentrating on trying to make the greatest comic book we can.”

Until then, Saga fans at least have some fanart to admire.