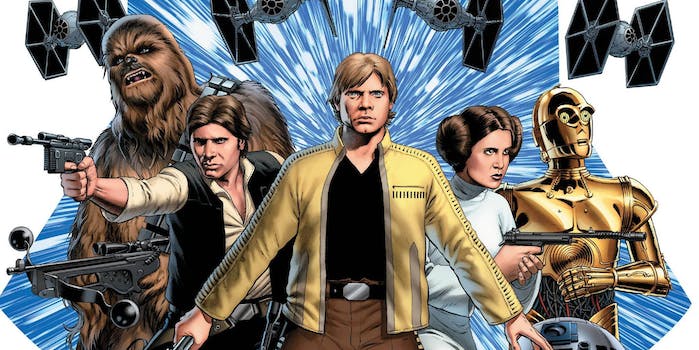 Jump into one title—or dive right in to them all.

The Star Wars universe is vast, offering plenty of time and space to be explored between movies. And ever since Disney abandoned the previous Expanded Universe of novels and other tie-in material, it is actually possible to catch up with all the supporting canon—even if that’s still quite a bit.

Marvel’s new Star Wars comics began in 2015, mostly following the exploits of major characters like Leia and Darth Vader. After a year and a half, there are enough comics that it can seem a little daunting (not to mention expensive) to try and read all of them, so we’ve put together a reader’s guide to each series.

The main Star Wars comic is a direct continuation from Episode IV, when Luke was still young and untrained as a Jedi apprentice. Rather than exploring a snapshot moment in the life of one or two characters, it launches the kind of epic story that was previously told in the old “Legends” books. It also clarifies why Han and Leia both have solo series, while Luke does not: Luke is the protagonist of Star Wars, with the others as supporting characters with their own subplots. 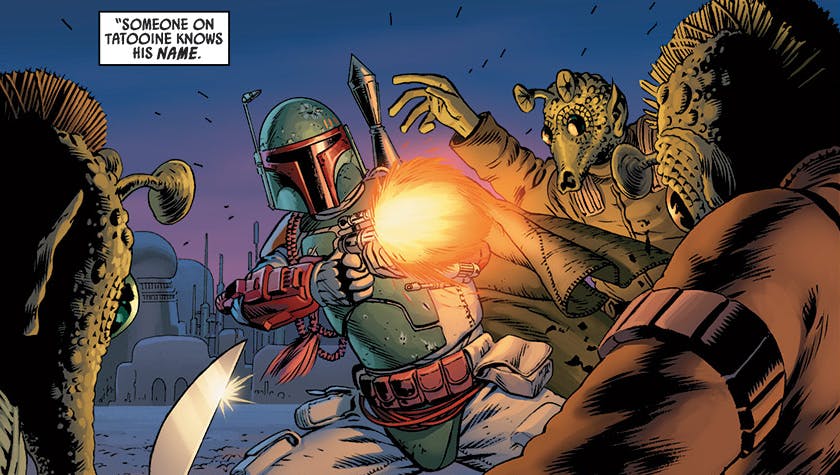 Unsurprisingly, Marvel hired an illustrious creative team for its headline Star Wars comic. Jason Aaron has written on an almost implausibly long list of beloved superhero comics, collaborating on Star Wars with acclaimed artists like John Cassaday and Stuart Immonen. Beginning with a Rebel mission with Luke, Leia, Han, and Chewie, this comic is about as canon-compatible as you can get, from the characterization of the main trio to the fast-paced nature of the story.

My only criticism is that Darth Vader is introduced almost immediately, which detracts somewhat from his ominous and distant role in the movies — but you can’t blame them for wanting to include such an iconic character. (There’s also plenty in there for Boba Fett fans, by the way.) You also have the option of jumping in at vol. 2 (issue #7), which goes in three interesting new directions: a flashback to Ben Kenobi’s early years on Tatooine, a Han/Leia storyline introducing Han’s wife (!), and Luke going on an ill-advised solo journey to Coruscant, to dig into the history of the Jedi Order.

Kanan is the only Star Wars title that isn’t immediately recognizable to all fans. Launched shortly after Marvel acquired the rights to publish Star Wars comics, it follows the former Jedi knight Kanan Jarrus, one of the main characters in the Clone Wars TV series. He’s one of the few survivors of Chancellor Palpatine’s “Order 66” massacre of the Jedi, and the first volume mostly covers that period in his life, told in flashbacks from his later life as a freighter pilot.

While Kanan is a good read if you were fond of the character in Clone Wars, it’s not essential reading to fans who are more familiar with the movies.

Beginning after the medal ceremony at the end of Episode IV, Princess Leia puts its title character in an unexpected position: social outcast. Despite being a prominent figure in the rebellion, Leia hasn’t yet earned the respect of the rank-and-file soldiers, who refer to her as the “ice princess” due to her lack of public mourning for Alderaan.

This comic has kind of a young adult vibe, with its young protagonist being disrespected or rejected by those around her and advised to stay out of trouble by superior officers like Admiral Ackbar—something that doesn’t quite jibe with the way she was portrayed in the movies. The upside is that it also introduces several new female characters, a common theme among the new Star Wars comics.

Written by Mark Waid and drawn by Terry Dodson, this five-issue miniseries explores Leia coming to terms with the destruction of Alderaan, a formative moment in her life. Partnered with a distrustful Rebel pilot named Evaan, Leia embarks on a personal mission to find Alderaanian survivors. This is one of the more insightful and interesting ideas among Marvel’s Star Wars titles (all of which, understandably, fall into the “space adventure” genre), exploring Leia’s role as a displaced member of a dying minority in the Galaxy. However, the way the comic frames Leia’s role in the Rebellion (along with her physical appearance, which intentionally avoids mimicking Carrie Fisher’s features) may not gel with every fans’ view of her canon characterization.

This four-volume, 25-issue series is just wrapping up, after a popular run from writer Kieron Gillen and artist Salvador Larroca. 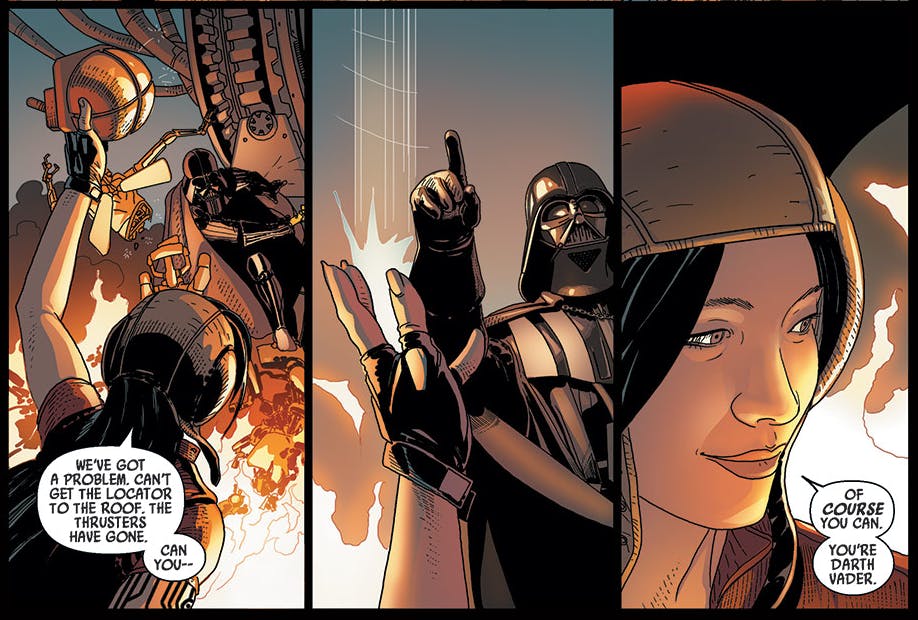 Darth Vader is a difficult character to get right. His effectiveness in the films is often due to his looming presence, inspiring fear with his uniquely intimidating costume, voice, and theme music. A Darth Vader comic has to find ways to work around this, especially if we’re meant to follow the story from his perspective.

Luckily, Larroca is very good at using Vader’s body language and silence in conjunction with more talkative characters, calling back to his behavior in the movies. The comic’s lengthy run also means we get more character development and a deeper look at Vader’s inner life, perhaps even moreso than some of the other Star Wars comics. (For instance, Han Solo’s characterization has to remain fairly static in the time between movies, whereas Vader is mostly opaque in the films, leaving room for new developments “offscreen.”)

One unexpected highlight of this series is its humor. Vader isn’t exactly a funny guy, but he can inspire a kind of gallows humor, and this series does a lot with its additional side characters. Vader gets a young female sidekick in the form of the engineer/archaeologist Doctor Aphra, along with Triple Zero, a protocolo droid who specializes in torture. Yes, the comic relief role is Evil Torture C-3PO.

Mark Brooks’ art on Han Solo is a great example of how different creators choose to interpret the world of Star Wars through the lens of each character. Unlike Princess Leia, which feels modern and youthful, Han Solo follows the busy, grungy aesthetic of places like Mos Eisley or Maz Kanata’s castle. Writer Marjorie Liu favors a noir-esque internal monologue, which feels perfect for Han: He’s kind of a loser, but thinks he’s cooler and more badass than he actually is. 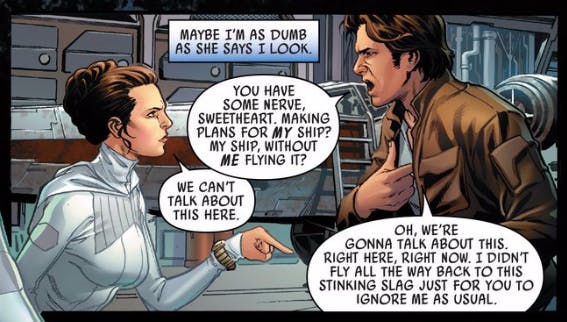 Han Solo has only been running for a couple of issues so far, so it’s hard to gauge its quality alongside the longer-running comics. One thing’s for certain, though: If this series includes even one backstory flashback, fans will obsessively mine it for hints about the upcoming Han Solo movie.

Each of Marvel’s Star Wars comics open with a few nostalgia-inducing paragraphs of yellow scrolling text. Usually they’re a quick explanation of the book’s premise, but Chewbacca’s sets the tone as something a little different—and very fun.

Tie-in comics are not known for being especially experimental, but Chewbacca is probably the weirdest comic in Marvel’s Star Wars line. Why? Well, for starters, its protagonist only speaks in the wookiee language of Shyriiwook. To balance things out, writer Gerry Duggan introduced a new character, a teenage girl named Zarro—whose Shyriiwook is about as good as yours or mine.

While most of the other tie-in comics focus on the war, Chewbacca is more self-contained. Artist Phil Noto succeeds with two tricky achievements here: drawing a protagonist who is covered in long hair, and showcasing the humor of Chewie’s reactions and body language. He’s the ultimate laconic hero, made moreso by the fact that no one else in the story can understand a word he says. It’s a sweet five-issue miniseries and one of the strongest Star Wars/Marvel publications so far. 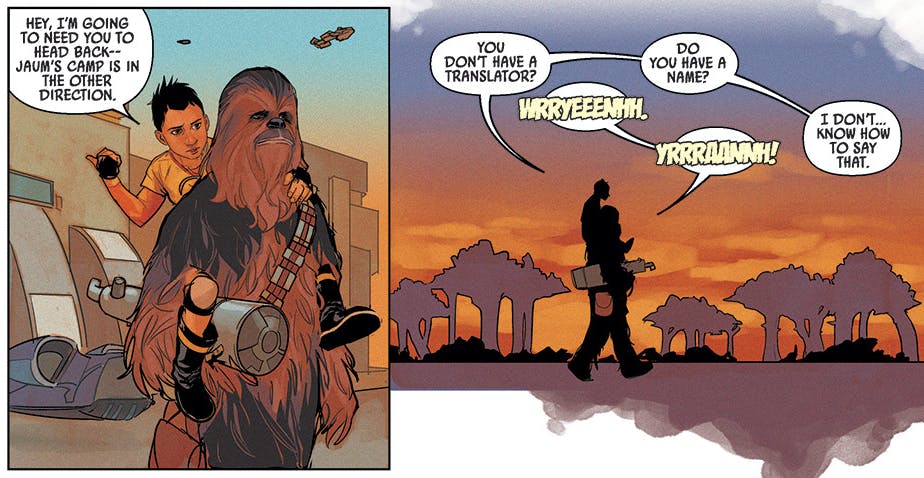 Here’s everything you could want from a story about Lando Calrissian, a character who made an indelible mark in the movies without getting much character development or backstory. Lando is the sexy scoundrel Han Solo only thinks he is, charming his way through deals between criminals and Empire spies.

Charles Soule’s dialogue is far more casual and natural than the lofty tone of his work on Obi-Wan and Anakin or the retro adventure style of Poe Dameron. Artist Alex Maleev and colorist Paul Mounts create a gorgeous aesthetic for Lando’s mostly daylight-free existence. This comic is straight-up fun to look at.

Set immediately after the battle of Endor, this four-issue miniseries is a lowkey Poe Dameron prequel, starring his mother Shara Bey, an X-Wing pilot.

Shara gives us a new view of the “end” of the war, sent on a series of secret missions including a trip to Naboo, which wasn’t part of the Star Wars universe when the original trilogy was filmed. Writer Greg Rucka is among the bigger names in Marvel’s Star Wars franchise, working with luminous art from Marco Checchetto and colorist Andres Mossa.

Checchetto and Mossa’s glowing, dramatic art is ideal for a comic about roving Jedi warriors. Checchetto is a master of epic landscapes, and there are plenty of scenes where the characters take a moment to pose melodramatically with their capes flapping in the wind, anime-style. Very appropriate for a pair of characters who can often be rather pompous (Obi-Wan) and volatile (Anakin).

Written by Charles Soule, this miniseries covers part of the period between Episodes I and II, when Anakin is 12 years old. In a story that veers more to the fantasy side of Star Wars‘ science fiction/fantasy divide, we follow Obi-Wan and Anakin on a typical mission for a master and padawan partnership: visiting a planet ravaged by war.

The concept behind their mission—two warring factions each believe the other is evil—isn’t exactly new territory, but it’s a fitting backdrop for Anakin’s burgeoning doubts about the fallibility of the Jedi as Galactic peacekeepers.

As a direct adaptation of the movie, this series has the same appeal as a novelization—albeit a very simplified one. It’s a good choice if you want to share the story with children who are too young for the explosions and action scenes of the movie, but it doesn’t really add anything. Despite the involvement of Chuck Wendig (author of the popular Star Wars novel Aftermath), this comic doesn’t expand on The Force Awakens. Mostly, it serves as an unintentional reminder that the films rely heavily on performance, music and effects, rather than the dialogue and setpieces that can be translated into comic form.

In the best possible way, Poe Dameron feels very old-school. Set shortly before The Force Awakens, it follows Poe’s quest to find Luke Skywalker, with help from BB-8 and his squadron of Resistance pilots including fan-favorites Snap Wexley and Jessica Pava.

All of Marvel’s Star Wars comics are family-friendly, but Poe Dameron is one of the most suitable for younger readers—without actually feeling like a “children’s comic.” Poe is cast as the wholesome yet dashing pilot hero, with the ostentatiously evil Agent Terex as his antagonist in a simple adventure story that wouldn’t be out of place in a mid-20th century serial. Phil Noto’s art is beauiful, creating clean and dynamic X-Wing scenes and an impressively realistic reflection of Oscar Isaac’s performance in the movie.

SEE ALSO: I watched every Star Wars movie in one sitting: