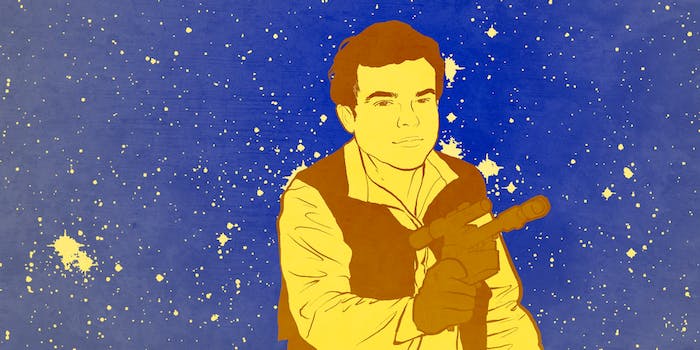 Does this young man have what it takes?

Few Star Wars characters are as iconic as Han Solo. That’s why fans are so nervous following reports that Disney has selected the actor who will play young Han in an upcoming film.

The New York Post‘s Page Six was the first to report the news that Alden Ehrenreich, 26, had scored the role. Ehrenreich is best known for his work in the Coen Brothers film Hail Caesar! and is currently filming an adaption of the novel The Yellow Birds. Variety, the Hollywood Reporter, and Entertainment Weekly subsequently reported the casting.

Disney did not respond to a request for comment on the reports.

Ehrenreich was one of the actors on Disney’s latest rumored shortlist, alongside Transformers: Age of Extinction star Jack Reynor and Taron Egerton, best known for The Kingsman and Eddie the Eagle. It is said that more than 2,500 actors auditioned for the part of young Han Solo.

But despite Ehrenreich’s dashing good looks, fan reaction is mixed—which is understandable considering how beloved the character is and how nervous some fans are about anyone filling Harrison Ford‘s legendary space boots.

WHY IS ANYONE OTHER THAN HARRISON FORD PLAYING HAN SOLO pic.twitter.com/TDLo3lcBE6

Phil Lord and Chris Miller, who directed The Lego Movie, are set to direct the young Han Solo film, which will also feature Chewbacca and has been described as an “origin story” for the duo. Lawrence Kasdan and his son Jon are writing the script.

Miller shared a photo of Solo’s famous blaster on May 4, aka Star Wars Day.