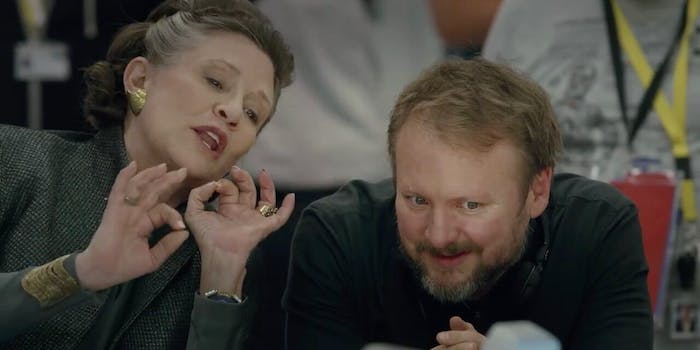 'I think it’s going to be really sad but really joyful, I hope.'

Star Wars: The Last Jedi director Rian Johnson is giving fans another glimpse behind the curtain in a new video that offers the tiniest of bread crumbs about the upcoming movie.

The behind-the-scenes video, courtesy of USA Today, doesn’t reveal much in terms of plot or story, but it demonstrates just how much fun Johnson, a Star Wars fan in his own right, had while making the film. While some of the film’s stars were on-hand to offer the vaguest of teases, Johnson—who’s clearly having fun while shooting it—described the feeling of working on something he’s admired for so long.

In an accompanying interview, Johnson discussed what watching fans respond to Leia Organa’s final appearance in the Star Wars franchise would be like. Although Lucasfilm announced earlier this year that Leia Organa wouldn’t appear in Star Wars: Episode IX, Carrie Fisher‘s performance in The Last Jedi was left unaltered after her death nearly a year ago. So there may not be the death scene people are expecting.

“Having these scenes in the film recontextualize tragically with her not being here anymore, it’s incredibly emotional,” he told USA Today. “For the next few months, seeing the fans … process the loss and celebrate her as Leia one last time, it’s going to be intense. I think it’s going to be really sad but really joyful, I hope. She really kicks (butt) as General Leia, and I’m happy for that.”