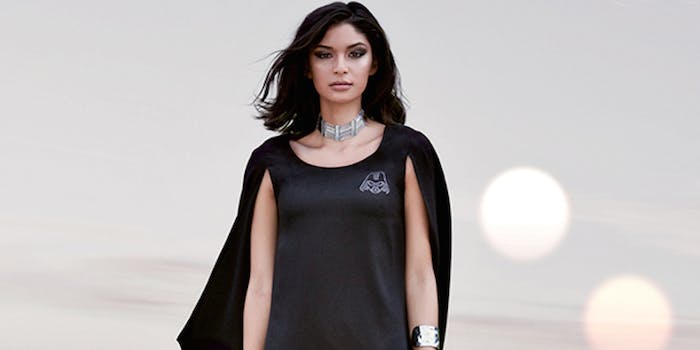 The line is just the start of new fashion inspired by the galaxy far, far away.

There has been a geek fashion awakening!

Fangirls might feel the Force stronger than ever at Hot Topic Monday as the company launches a new Star Wars by Her Universe collection. Just in time for The Force Awakens and the holiday season, the line features two stylish dresses and three unique jackets inspired by both new and old characters from the galaxy far, far away.

Her Universe founder Ashley Eckstein told the Daily Dot in an exclusive interview that they began meeting with Lucasfilm about the line at the end of January. Lucasfilm reached out to them about wanting to create a fashion collection.

“They were just like, ‘What can we do to support you in that?’” she said. “So I really have to give credit to Lucasfilm for always wanting to push the envelope and wanting to do more fashion for fangirls. That’s all they really needed to say and we were able to take it away from there and of course Hot Topic is a prefered partner of ours. We do so much together between the [San Diego Comic-Con] fashion show and just continued collections so Hot Topic seemed like the perfect home for a lot of these pieces.

“This is just the beginning of what’s to come in 2016. We already have another Star Wars fashion collection in development that is amazing and I really think it’s crazy how far Star Wars fashion has come over the past five years. I mean, we wanted a T-shirt five years ago and now we’re talking to Lucasfilm about full fashion collections. It’s exciting.” 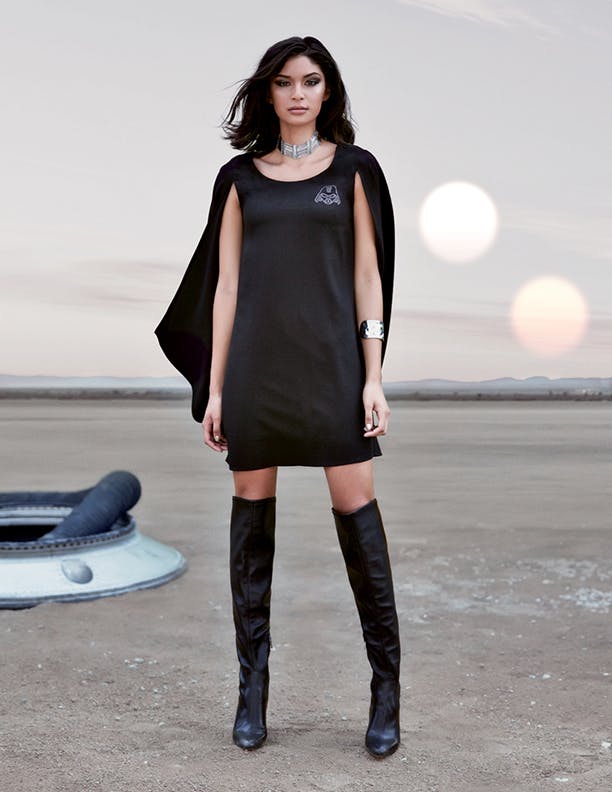 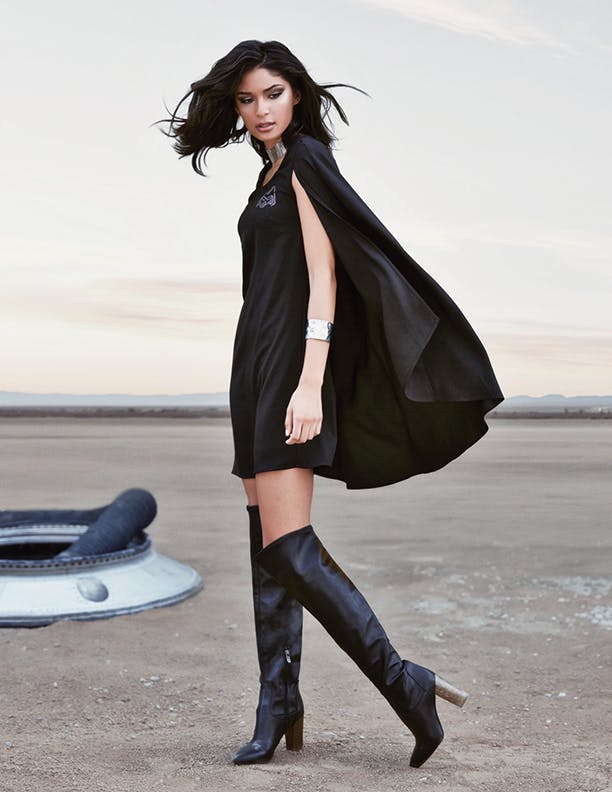 The Darth Vader dress looks simple and elegant with its scoop neckline and stud detailing. However, it also features a bold cape overlay to help fans feel more like the Sith Lord than ever before. According to Eckstein, the design resulted from them really starting to pay attention to what is trendy in the fashion world.

“We definitely try to bridge the gap really between the fashion world and what’s on trend and with geek fashion,” she said, “and we started to see that honestly capes were trending. It’s funny [because] obviously we look at it with a different set of eyes. We look at it and we say, ‘OK, well, not only is this a trend, but it’s also perfect for Darth Vader.’ So that’s really how it happened. All of 2015 and now going into 2016, when you start looking for it a lot of people are actually doing things with shawls or with capes.” 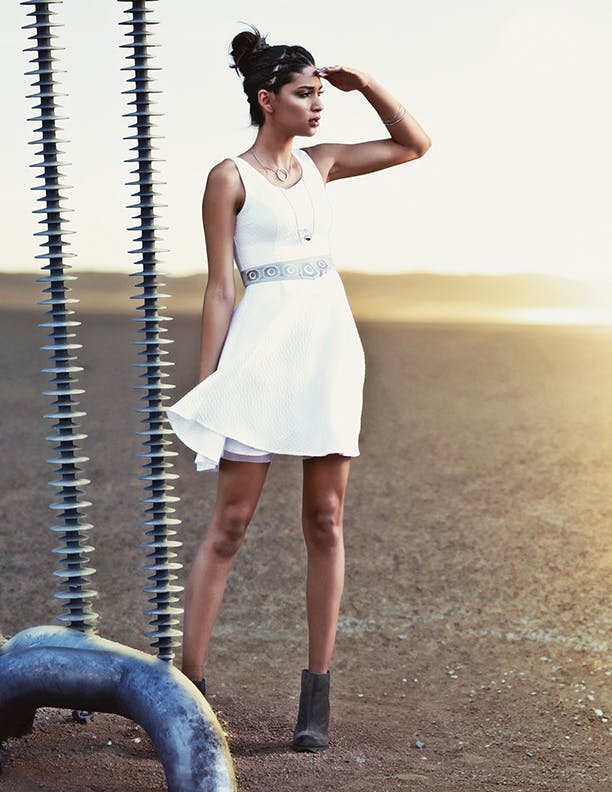 The other dress, scheduled to be available in December, leans more to the light side of the Force. Eckstein explained that the Princess Leia dress was created with the goal of making something women can wear to their holiday party, though everyday cosplayers will enjoy the dress as well.

The question they considered was: “If a fangirl is looking into her wardrobe and wanting to wear something nice for a holiday party, how could we translate Princess Leia’s dress into that?” It features metallic threads and the character’s familiar belt embroidered on the dress, which is made of a fabric that apparently has a shine and shimmer to it.

The line also includes new pieces of geeky outerwear with three character-inspired jackets. Once again, the classic look of Darth Vader offered inspiration, this time for a black faux leather fitted jacket with the Imperial symbol on the back and pockets, as well as the quote “You underestimate the power of the dark side” on the inside red lining. The Boba Fett bomber jacket features the familiar colors and symbols of the bounty hunter while the BB-8 bomber jacket has the droid’s already classic colors and design. 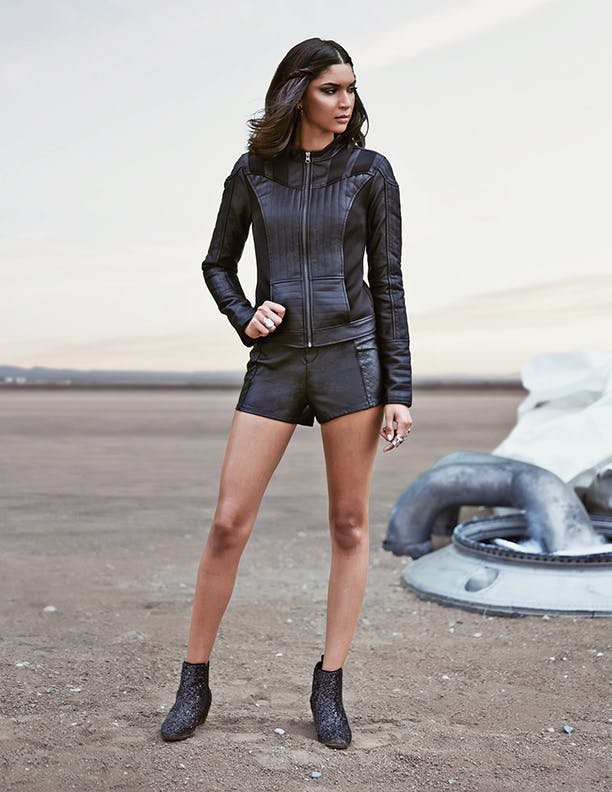 Darth Vader Jacket: $69.50 at all Hot Topic stores and HotTopic.com 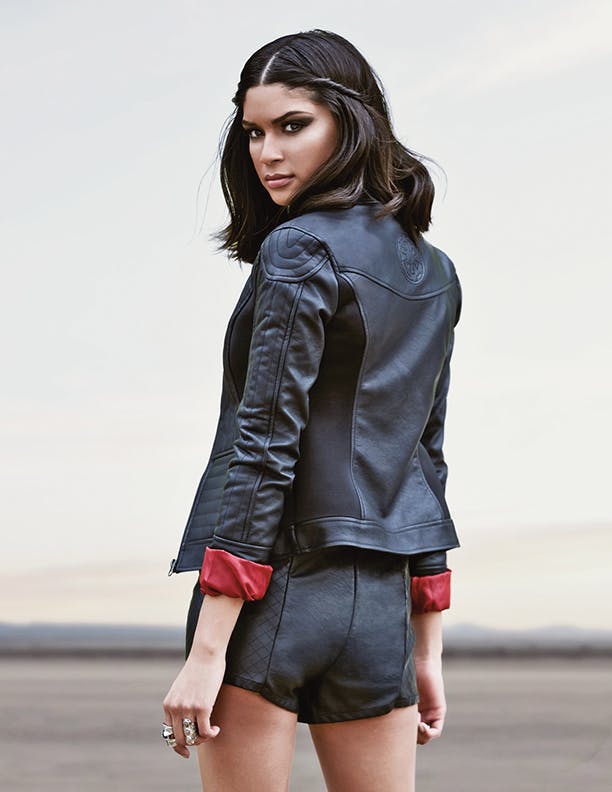 Together we can rule the galaxy. #StarWarsbyHerUniverse coming November 16th.

“We previously released the Iron Man bomber jacket as a part of our Marvel collection and it really caught us by surprise,” Eckstein said. “I mean we loved the jacket, but the feedback that we got from the fans is that was their favorite piece in terms of the silhouette and the style and we sold out of the jacket right away so not as many people were able to get the jacket as they wanted. So we definitely wanted to make more jackets like that to be able to serve the franchise, but also the need for more jackets. I’m excited to say that the Iron Man bomber jacket from the Marvel collection is back in stores right now, so if they didn’t get it the first time around they can still get it.”

Eckstein is also thrilled that the pieces will be offered in plus sizes by Hot Topic, from size zero to five and extended sizes. 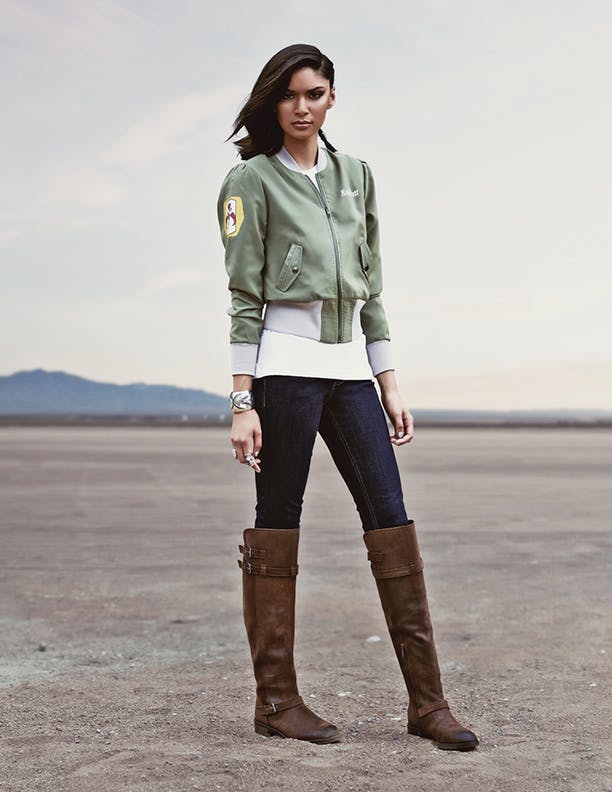 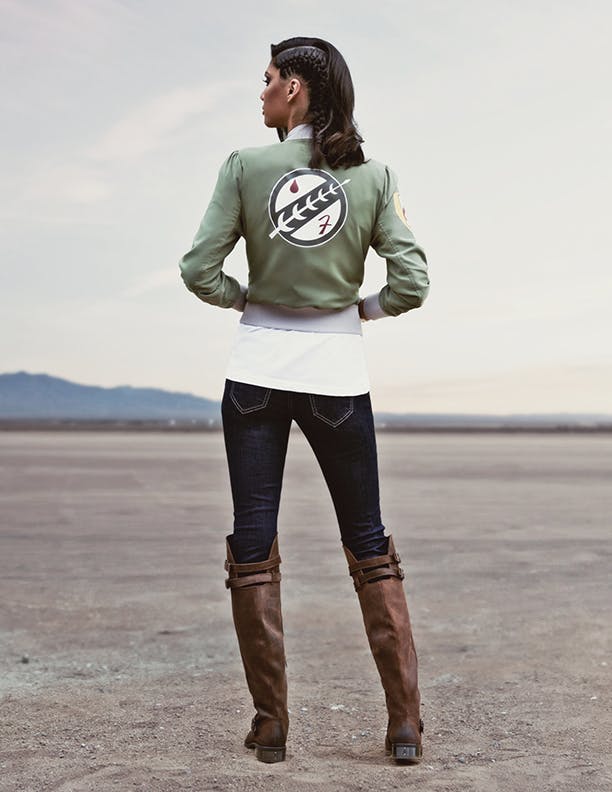 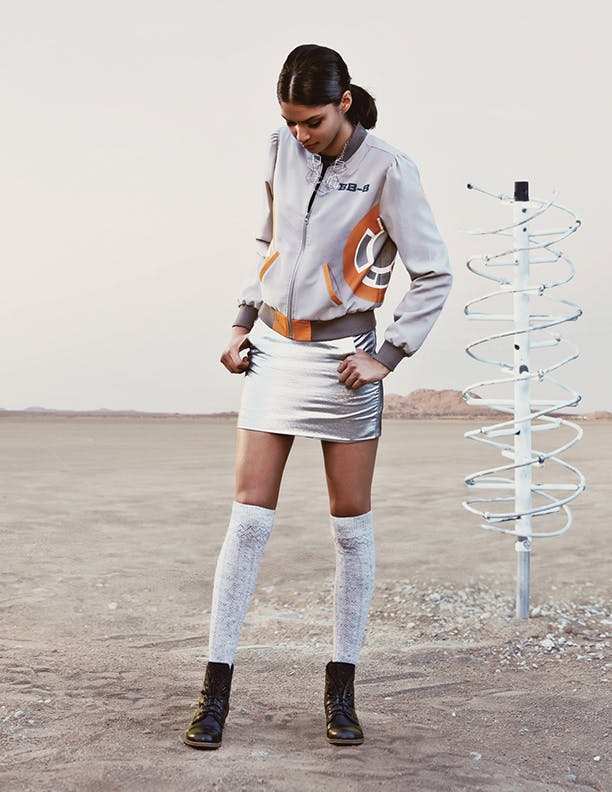 “That really is an effort after listening to the fans,” she said. “One hundred percent, the fans made that difference so this is the first collection where Hot Topic will have plus sizes, but also Torrid is carrying this collection as well. Torrid has certain pieces and also Torrid has a couple of pieces that Hot Topic didn’t order. We have a lightsaber dress. Our kind-of-iconic-now lightsaber skirt that everyone’s seen this year, we turned that into a dress for Torrid and they also have a stormtrooper sweater that is exclusive to Torrid so there’s going to be a lot of Star Wars by Her Universe between Hot Topic and Torrid and almost everything is in extended sizes or plus sizes so we’re really excited about that.”

Eckstein wants fans to do more than perhaps buy a piece from the line, though. She is also encouraging fans to use the hashtag #MyStarWarsStory to share their experiences with the franchise on social media.

“Gearing up for Episode VII, this has truly been the year of Star Wars,” she said, “and I just stopped for a minute and looked at the fashion collection and had a chance to reflect on the journey that as fangirls and even all the fanboys that have supported us, the journey that we’ve been on for the past five years, and it really is remarkable. Five years ago we could barely get a T-shirt—like that was unheard of for us to get a T-shirt and our goal back then was more than a T-shirt. Our goal was that we could spread the message that Star Wars was for everyone. That fangirls could step into the spotlight and be celebrated and that there would no longer be the stereotype that Star Wars was just for men and boys and that was our goal. And I said from day one that I can’t do this alone. This is a group effort by all of us.”

In the press release for this collection, Eckstein wrote a letter to fans reflecting on this effort. She said she wanted to write it as a thank you to fans as well as a look at how far Star Wars fashion has come, thanks to everyone’s love of the franchise.

“We all have a story,” she said. “Everyone has a story of what Star Wars means to them, so I thought what better way in anticipation for the movie than for fans to upload their video and explain what Star Wars means to them with the hashtag #MyStarWarsStory. And we’re going to do a fan appreciation video with Hot Topic and try to include as many of the stories as we can [for] no other reason than just to celebrate Star Wars fans. That’s really the purpose, to celebrate what we love so much.” 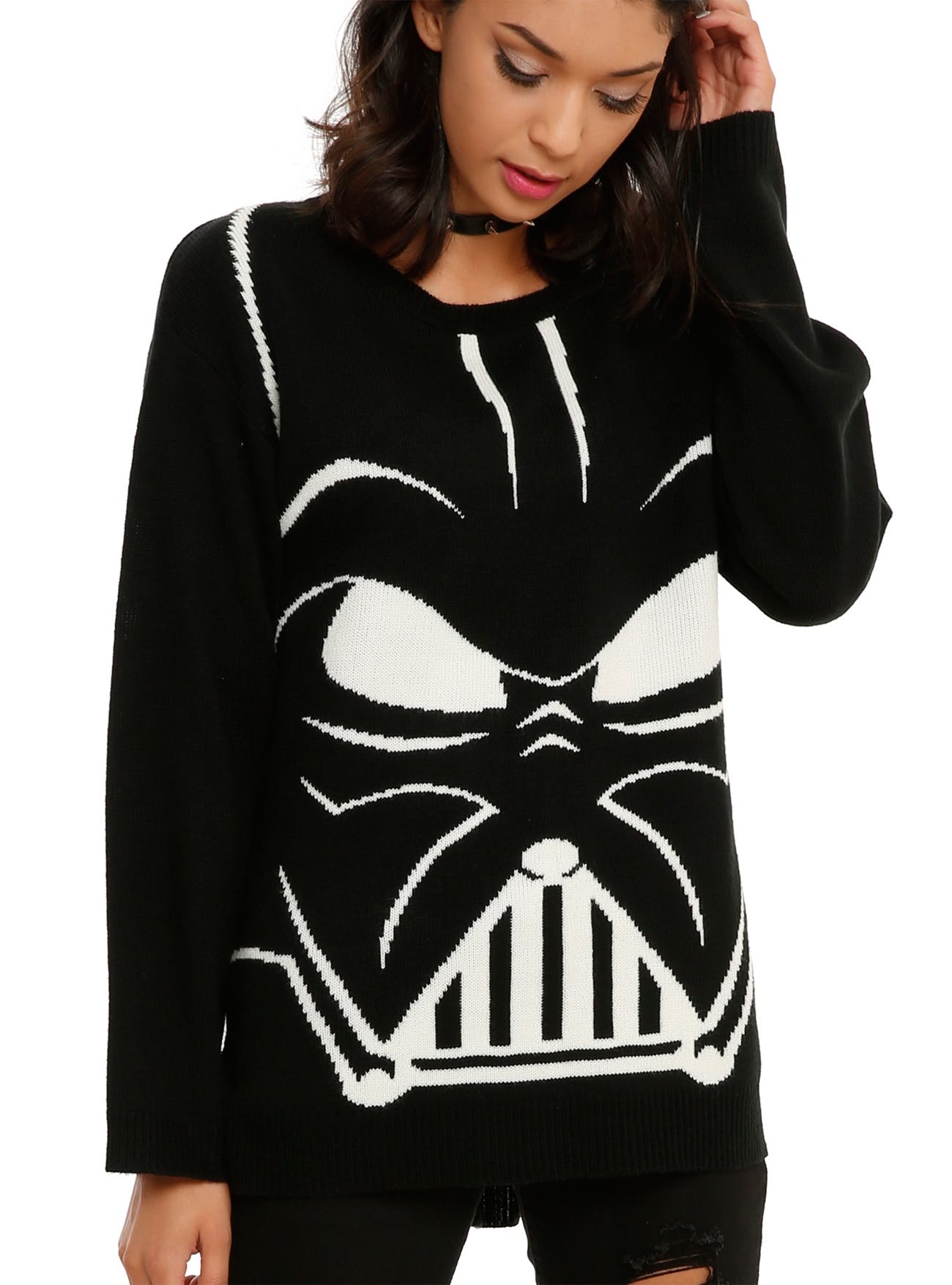 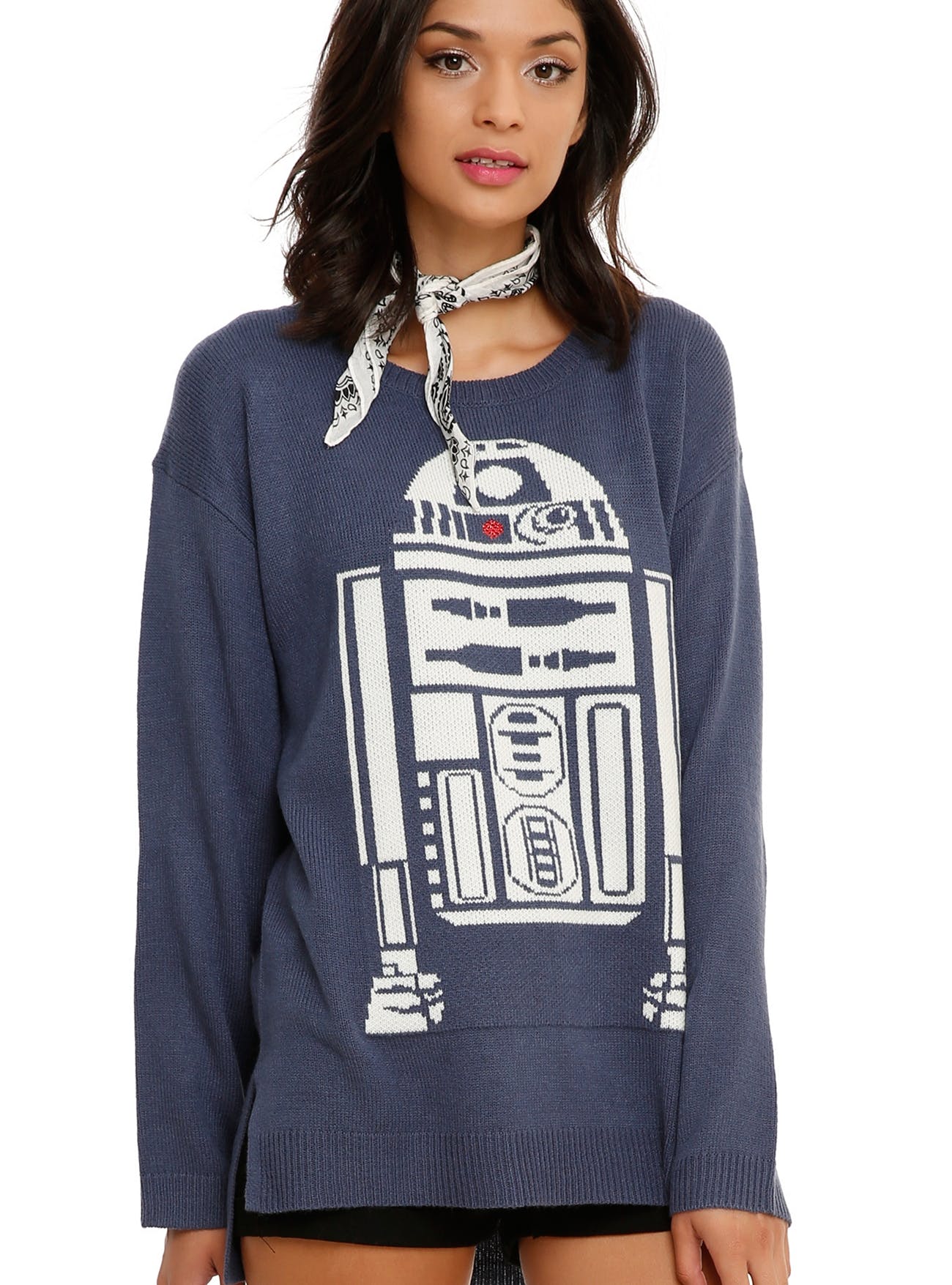 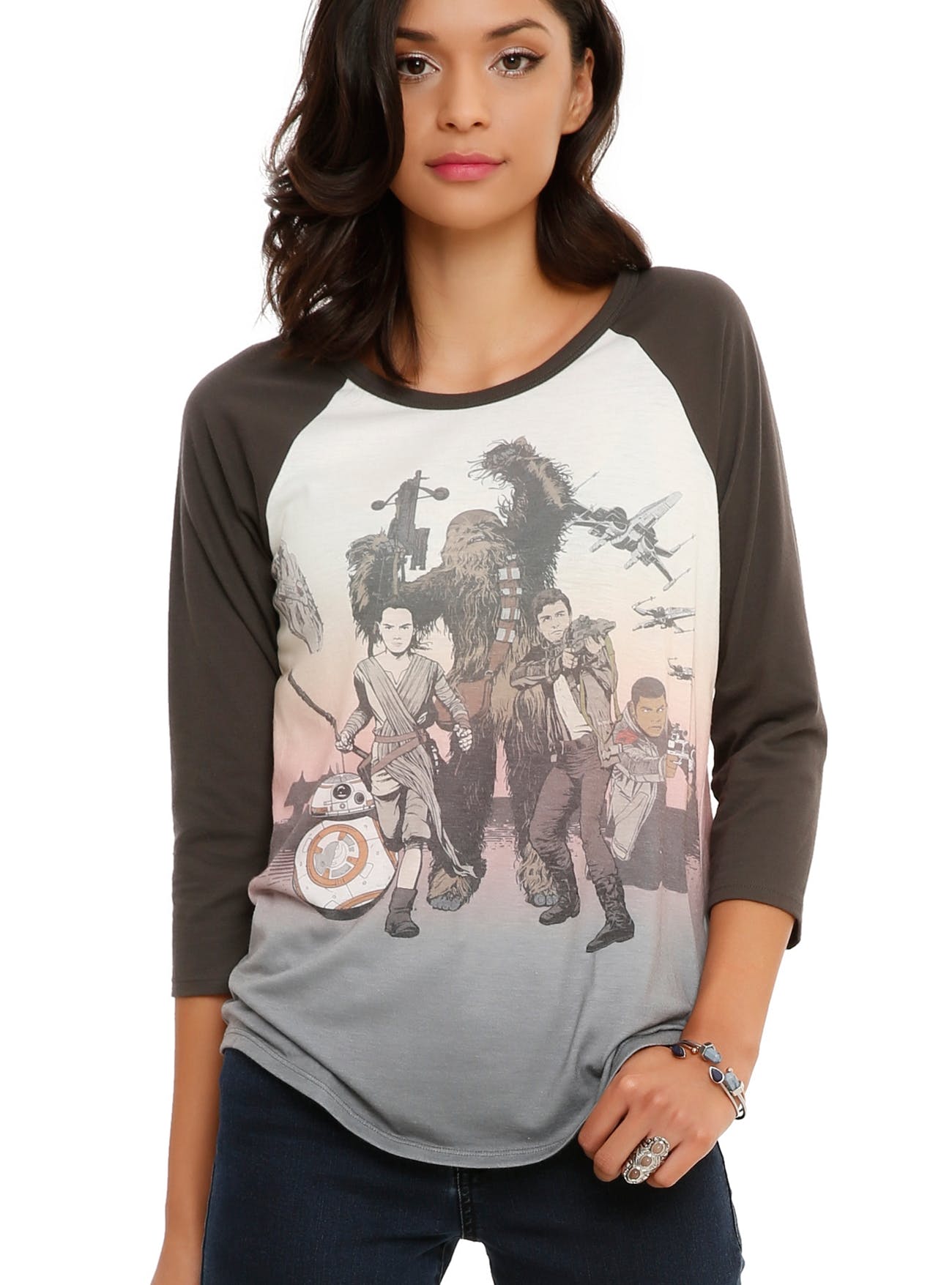 There will be a lot more for fans to celebrate as the year goes on, and that includes more Star Wars fashion. In addition to the new pieces in this collection, a Darth Vader knit sweater, R2-D2 knit sweater, and Force Awakens tour tee are also being highlighted. If you want more designs inspired by the new film, don’t worry. They’re on the way.

“This is just the start of what we’re doing for Episode VII,” Eckstein said. “When we were designing this collection, our resources were limited in terms of the characters’ costumes, so we had to be a bit more interpretive of the limited outfits we had. But I can assure you that more Episode VII fashion is coming.”

All you have to do is search your feelings, and you’ll know it to be true! With a new wave of Star Wars on the way, it looks like women and girls will be far from forgotten in the fashion released for fans.