The Her Universe founder talks geek fashion, expanding into entertainment, and 'His Universe.'

A decade ago the landscape of pop culture-inspired, geek fashion looked very different—especially for women. Finding a T-shirt in a women’s size was difficult, and finding any kind of variety? Good luck.

In the last five to six years, that has slowly changed because of fans are asking for more, and a number of companies have emerged to help meet that demand.

One of those companies is online fangirl fashion retailer Her Universe. Launched in 2010 by actress Ashley Eckstein, who is the voice of Ahsoka Tano in the animated series Star Wars: The Clone Wars and Star Wars Rebels, the company declared that female fans wanted and would buy apparel for licenses like Star Wars, Star Trek, and more.

As this influential geek fashion company celebrates its fifth anniversary today (with goodies for fans!), we spoke with Eckstein about Her Universe and what the future may hold for the company.

How does it feel reaching this company milestone and celebrating this anniversary?

Somebody told me once, when I first started out starting a business, they said, ‘It takes five years to truly build a business.’ They said ‘It will take three years to feel like you’re finally getting your feet underneath you and then at five years you’ll know if you’re off and running that you truly have a business.’ I feel like that was such good advice because it’s true. At three years we finally felt like, ‘OK, we’re just now becoming profitable. We feel like we’re growing, we feel like people are finally finding out about us.’ And then at five years I’m proud to say that we’re a profitable business, we’re a growing business, we’re building our team, growing our team, adding new licenses, working with several retail partners, and we have a long way to go but I feel like we’re off and running. Five years was always my goal. It was my goal to get to five.

When you started the company 5 years ago, did you imagine it would grow to become what it is today? Has it met or exceeded your expectations? 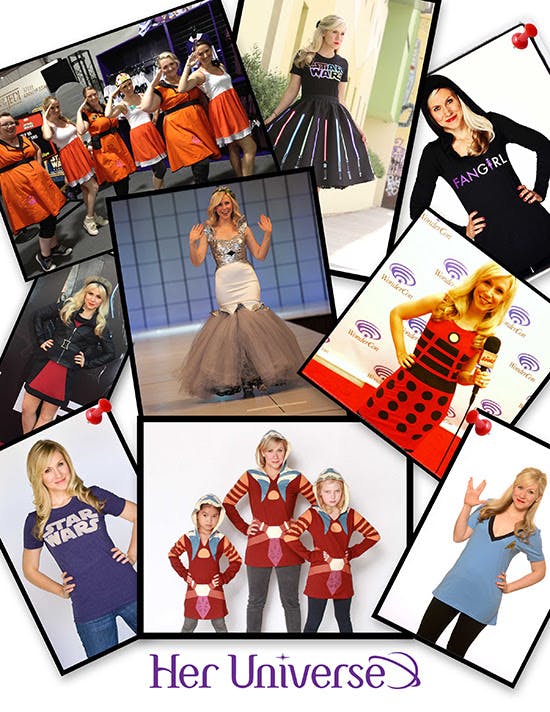 What influence do you feel Her Universe has had on geek fashion over the last five years and what influence would you like to continue to have in that area?

Five years ago when we started, I will say it really is a fact that there was very little geek fashion. Pretty much it was just T-shirts and there was the occasional T-shirt for women and girls. We didn’t create the geek T-shirt for women by any means … I feel like a lot of fangirls had just kind of given up because for so long they had been ignored and companies had given up. They thought, ‘Well we’ve tried it and it didn’t work.’ Usually in retail once something is tried and considered a failure they usually don’t try it again and so sci-fi merchandise for female fans was already in that category of ‘we tried it and it didn’t work.’ So I do think it’s safe to say that it was in a bad place…

I do feel like we were the first company that said, ‘We’re going to only focus on female fashion, and we’re going to grow it,’ but I definitely want to state that we didn’t do it alone. This was very, very much a group effort. We said from day one to the fans ‘united we stand, divided we fall.’ The only way to create geek fashion for women and to create an equal space where girls can walk into a store and have options for them is if we do it together, and that’s exactly what happened. From day one the fans joined us, both male and female. We had just as many guy fans supporting us as girl fans. I’m proud to say we did it together. I will say that I feel like we were pioneers in geek fashion for fangirls, but we didn’t do it alone.

You mentioned that it was challenging starting the business. What challenges still remain?

There still is that stereotype that these are boys properties. That does still exist and there are still a lot of retailers that focus on the men and boys first, and, you know, female fans are an after thought. We’re still combating that stereotype, but it’s come so far. That’s only the case with some retailers. Other retailers like Hot Topic or Disney or ThinkGeek, their minds are changed. They see female fans as just as important as male fans so when you think that five years ago pretty much no retailers were focusing on fangirls and now a lot of retailers are focusing on fangirls, and so I think we just still have a ways to go if we really want to say that it’s truly equal because it’s not equal at this point. But we’ve come so, so far.

To me it’s not even about the merchandise. To me it’s about the community and fans feeling like they’re accepted. The reality is there are still fangirls being bullied for liking what they like. I feel like I won’t stop until it is an accepting environment for everyone. That’s my goal. My goal is not to be in every store, and how big can we grow our company. It’s not even about that. It’s about the community for me, it’s about the fans. I see these young fangirls that come into my autograph line like at Disney Star Wars Weekends—I just finished that event—and it’s just little girl after little girl that just loves Star Wars. They love Doctor Who. They love Marvel and I just want to create an equal environment for them. That’s what fuels me. We’re not there yet, but we’re getting there. 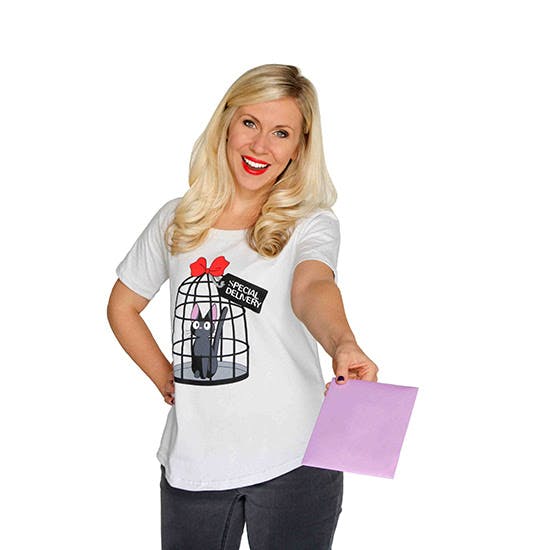 After celebrating this anniversary, next month is the second geek couture Her Universe Fashion Show at San Diego Comic-Con. Geek couture is another area that has been expanding over the years. What can fans expect at this year’s show in July?

Definitely second year in we’re trying to make it even bigger and better because we learned from last year. Last year was the first time we ever did it, and I’m so grateful to the designers and to the fans that participated and also showed up for this new thing. It was something that we were trying and there definitely seemed to be just magic in that room because I felt like geek fashion is something that everyone cares so passionately about and finally there was this runway that celebrated this faction of fashion … Last year I had a beautiful Totoro couture gown designed by Catherine Elhoffer that she just did such a beautiful job, she’s so talented. This year I’m excited to say that one of the winners from last year Andrew MacLaine is making my couture gowns and I’m actually going to have three couture gowns so I’ll have three costume changes throughout the event.

We have 25 designers this year and their gowns are going to be beautiful! The designers just really went above and beyond. We have really exciting properties that are being designed for this year. Some to be expected, some unexpected and some exciting announcements, some great judges, so it will definitely be a fun night. 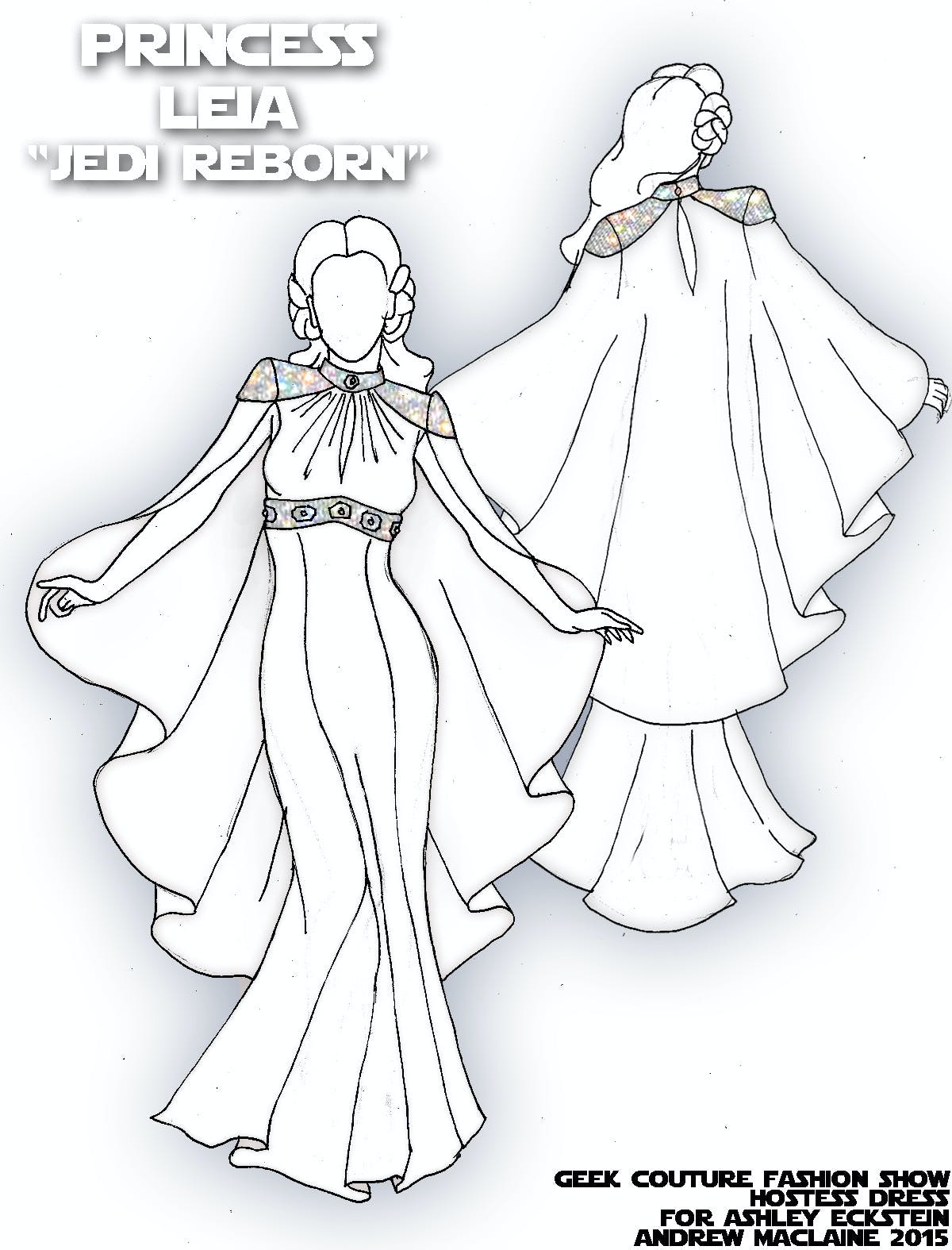 Where would you like to see Her Universe in the next five years?

In the next five years, we definitely want to be known as a fashion brand. We started five years ago with just T-shirts and hoodies and I feel like that was revolutionary for the time. A T-shirt made for women for Star Wars was just unheard of, and now we’re doing dresses and couture dresses and jackets and blazers and all sorts of things. So, we want to be known as a fashion brand and not just a T-shirt brand. We want to expand more and be known for our fashion collections. We want to continue to expand with the licenses that we offer. … We’re working on extended sizes and having true plus-size ranges and collections. We want to expand into girls. We also, because of the fans, I get asked literally on a daily basis, ‘What about his universe?’ I do see us expanding into his universe, but only where it makes sense. I don’t like to do something that’s already being done and being done well, but if I can fulfill a niche for men that isn’t being done I can see us doing his universe.