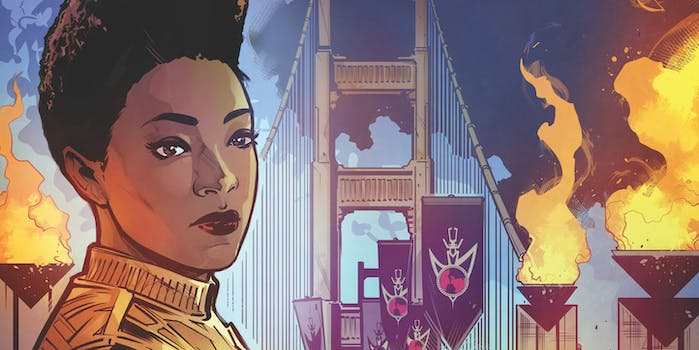 This deliciously evil tie-in is Discovery's best comic so far.

Every villain in Star Trek‘s Mirror Universe is a colossal idiot. They all think they’re strategic masterminds, but every one ends the same way, hoist on their own petard. If there were such a thing as a Mirror Universe sitcom, it would go something like this:

Terran Empire Captain: “Ah, Lieutenant Zurgon, you are truly my most trusted advisor. With you at my side, we shall unleash a reign of terror upon the galaxy!”

Lieutenant Zurgon: [Immediately stabs his captain in the back and assumes command, smirking into the camera.]

Naturally, I’m thrilled to see that Star Trek: Discovery is getting a Mirrorverse spinoff comic. Star Trek: Discovery: Sucession began this week, revealing what happened to the Terran Empire after Emperor Georgiou’s flagship exploded. As you might expect, it takes about two seconds for someone else to declare themselves emperor in her absence: Georgiou’s cousin Alexander, who seems to share her love of historical emperor naming patterns. He’s also extremely evil.

This also suggests that while Emperor Georgiou is due to reappear in the show, season 2 probably won’t return to the Mirror Universe. Succession #1 plays fast and loose with the main cast of Mirrorverse characters, with plenty of deaths already. We also meet the Mirror versions of recurring figures like Spock’s mom Amanda, and Harry Mudd. This sets the scene for a more adventurous story than the other Discovery tie-ins.

At this point in the Star Trek timeline, the Terran Empire is at its peak. But with Georgiou gone, it’s also dangerously unstable. Officers and politicians progress through the ranks by assassinating or betraying their superiors, which isn’t exactly a sustainable system of government. Like so many expansionist empires throughout history, it may collapse due to the selfish ambition of its rulers.

We know that the Terran Empire is still going strong 10 years later, during the time of Star Trek’s Original Series. However, it doesn’t last forever. By the time of Star Trek: Deep Space 9, humans have become second-class citizens. Georgiou and Alexander’s dream of a human-supremacist galaxy is dead. Instead, the Klingons and Cardassians dominate the galaxy. With Discovery introducing an interspecies alliance including Vulcans, Tellarites, Andorians, and Klingons like Voq and L’Rell, could Succession sow the seeds for the Mirror Universe’s great revolution?