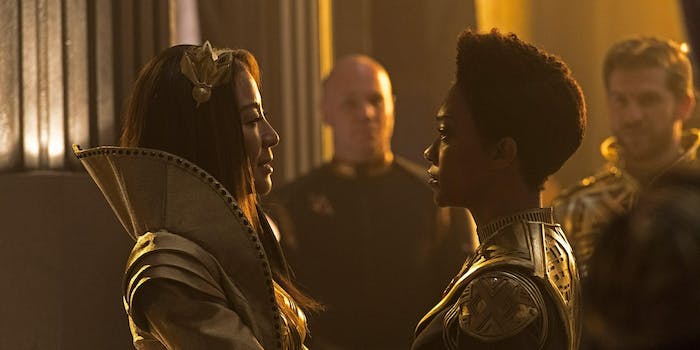 How the Roman Empire inspired a cool detail in this week’s ‘Star Trek: Discovery’

Georgiou's Mirrorverse title was inspired by the Romans, and tells us a lot about Terran Empire history.

In Star Trek: Discovery‘s dystopian Mirror Universe, Philippa Georgiou (Michelle Yeoh) rules the Terran Empire. The last few episodes gave insight into how that empire works, from routine torture to a disturbing habit of eating Kelpien slaves for dinner. We’ve seen a lot of its warlike fleet, but what about the rest of the galaxy? As it turns out, you can learn a lot from the Emperor’s official title.

Screenwriter Jordon Nardino went into detail on Twitter, explaining how he came up with Georgiou’s complicated string of titles in “Vaulting Ambition.” If you watch a lot of historical dramas, it may sound familiar. (In fact, it ties into why we described Georgiou’s palace as “a cross between a Roman reenactment event and a disco cabaret in a hotel ballroom.”) Nardino borrowed Georgiou’s naming system from Roman emperors, resulting in this lengthy title:

– Regina Andor: Andoria is a jewel in the Terran crowd. Subjugated warrior race. Early Terran conquest, pre-Sato. The title was created to celebrate this achievement.
Now as for Georgiou's many names…

So, that string of names explains what happened to Andoria and Vulcan (two of the four founders of the Federation) and the Klingon homeworld Qo’onos. After that, her “personal” name ties into the Star Trek: Enterprise two-parter “In A Mirror, Darkly,” which explored some relevant worldbuilding as a precursor to Discovery. The story concludes (spoiler alert!) with Hoshi Sato naming herself emperor, something that Nardino incorporated into Georgiou’s background.

Continuing in the same Twitter thread, here’s how Nardino linked Sato to Georgiou:

“Iaponius is Latin for Japanese. This (in my fever dream) is a title Hoshi Sato adopted when she named herself Empress, to honor her homeland. “So is Georgiou descended from Hoshi!?” Well… Hoshi was Empress. 100 years later, Georgiou is Emperor. Georgiou took one of Hoshi’s titles as her own to connect them. So Hoshi’s legacy as Empress must be good and Georgiou must either be connected to her in a chain of succession or might want to create that connection.

But they have different ethnic backgrounds. Hoshi is Japanese, Philipa is Chinese-Malaysian. So I don’t think it’s likely Philipa is a direct descendent like a great-grandchild. Cousins is possible. More likely tho… whoever inherited Hoshi’s throne was someone she adopted as a child & heir, the way most Roman emperors did. And that Emperor adopted his/her heir, and so on, until we get to Georgiou. And she is proud of the connection and flaunts it with the title Iaponius.

As for Centaurius, I figured it was the first system colonized by the Terrans since it’s closest to Sol so it was a title the Emperor at the time took in tribute.”

The Roman references continue on from the Terran Empire salute (a holdover from earlier Mirrorverse episodes), and the fleet’s assassination-fueled command structure. We also see plenty of shiny breastplates and capes, and Georgiou wears a sword and a hair accessory that looks kind of like a Roman laurel wreath. The devil is in the details, and Discovery‘s creators clearly had a lot of fun figuring out how to expand what we already know about the Mirrorverse.