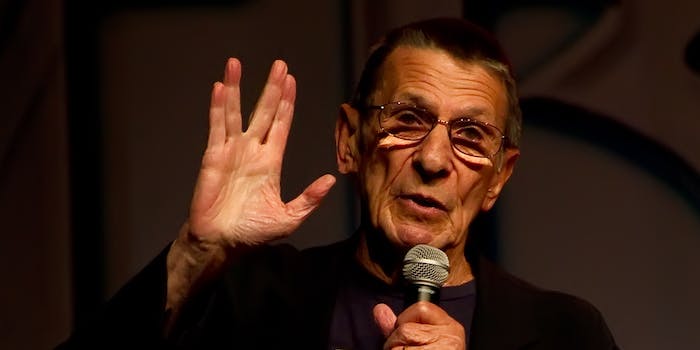 Just don't call it a Spockumentary.

Leonard Nimoy‘s death inspired a worldwide outpouring of grief and affection, as Star Trek fans mourned one of the greatest sci-fi icons of the 20th century. Now, his son Adam is planning a documentary about the actor called For the Love of Spock.

Adam Nimoy is already a well-established director, having worked on TV shows ranging from Babylon 5 to Gilmore Girls. His documentary which will be released in time for Star Trek‘s 50th anniversary next year, will explore why Spock has remained such an important figure in geek culture.

In an interview with Variety, Adam Nimoy described the film as a tribute to his father, saying that they had been working on the film together until days before the elder Nimoy’s death.

Nimoy published two autobiographies about his career, titled I Am Not Spock and I Am Spock, the latter written after he had come to terms with his Star Trek fame. In his later years, he embraced the fandom that Spock inspired and reprised the role in J.J. Abrams’ Star Trek reboot films. As a nod to the new generation of fans and Star Trek creators, young Spock actor Zachary Quinto will narrate the upcoming documentary.