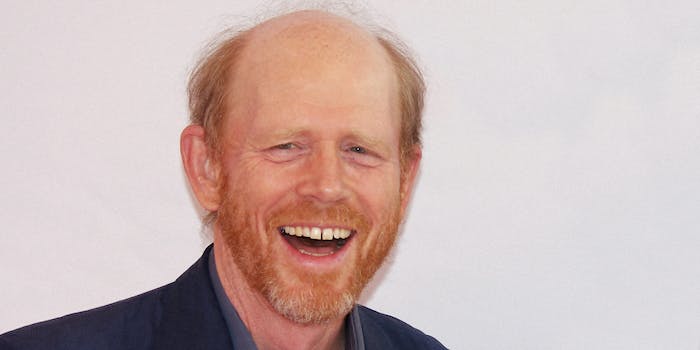 First revealed by the Hollywood Reporter, Lucasfilm almost immediately confirmed the news on StarWars.com. In a statement, Lucasfilm president Kathleen Kennedy emphasized the studio’s aim to continue the spirit of the films first captured more than 40 years ago.

“At Lucasfilm, we believe the highest goal of each film is to delight, carrying forward the spirit of the saga that George Lucas began forty years ago,” Kennedy said. “With that in mind, we’re thrilled to announce that Ron Howard will step in to direct the untitled Han Solo film. We have a wonderful script, an incredible cast and crew, and the absolute commitment to make a great movie. Filming will resume the 10th of July.”

Although Lucasfilm had cited “creative differences” in its official statement earlier this week, narratives in Hollywood trades emerged claiming that Lord and Miller were fired because they clashed with Kennedy and longtime Star Wars screenwriter Lawrence Kasdan, who wrote the screenplay for Han Solo as well as Empire Strikes Back.

Howard emerged as the frontrunner to replace Lord and Miller soon after the news broke, which suggested that Lucasfilm was looking for an experienced director and a “safe choice” to finish the project. Howard appeared in Lucas’ 1973 film American Graffiti, and at one point he was approached to direct The Phantom Menace. It was also another role of Howard’s—the narrator in Arrested Development—fans referenced both after Lord and Miller’s departure and now that Howard joined the film.

According to the Hollywood Reporter, Howard will meet with the film’s stars, including Alden Ehrenreich, Donald Glover, Emilia Clarke, Thandie Newton, and Woody Harrelson, to help calm things over during the transition. Howard will also view a rough cut of the movie to determine what he still needs to do. The Han Solo movie originally had a few weeks left of principal photography with about five weeks of reshoots already built into the schedule when Lord and Miller left the project.