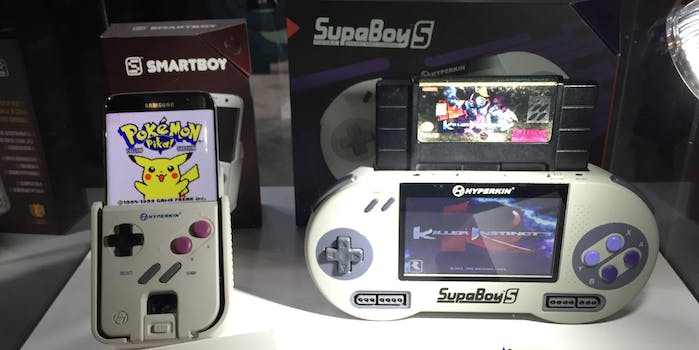 No need to own a Game Boy when you can just turn your phone into one, yes?

Hyperkin was just kidding when it posted an April Fool’s Day pic of an attachment for your smartphone that turned it into a Game Boy. Well, sort of.

The company later admitted on Facebook that it had plans to make the device a reality if people liked the idea, and now it’s something you can hold in your hands. Shown for the first time at E3, the developer version of the Smartboy will retail for $59.99 and can be pre-ordered on Hyperkin’s website. The good news is that it plays both Game Boy and Game Boy Color titles (yay!) using open-source software. Sadly, it only works with Android phones, as Hyperkin will only work with phones that run Google’s OS. In a super cool move, Hyperkin is offering a royalty percentage to anyone that can improve the Smartboy’s serial app and firmware. Hyperkin hasn’t announced a release date for the final model, but it did say that it monitors social media for feedback regularly and hopes to continue to improve the device as it evolves.

The SupaBoy S was also on display, which is a handheld that plays Super Nintendo cartridges. It’s an upgraded version of the original SupaBoy with a 4.3 inch LCD screen, as opposed to the prior model’s 3.5 inch screen. Hyperkin aims to release the final version of the Supaboy S late this fall, and it will retail for $89.99. Time to crack open your vintage game collection (that is, if you don’t have a shrine to it in your living room already).

Dennis Scimeca contributed to this report.