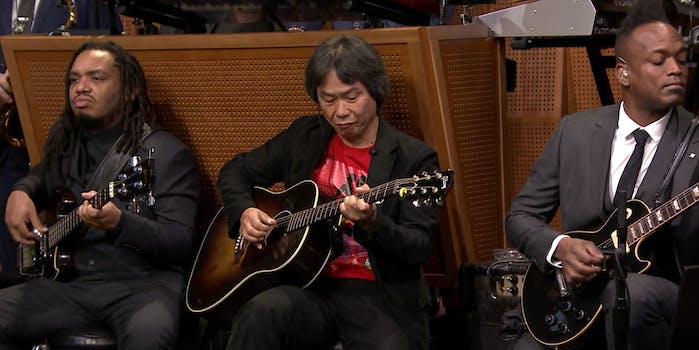 Shigeru Miyamoto and the Roots leveled up the Super Mario Bros. theme

You haven’t heard the Super Mario Bros. theme like this before.

Ahead of Super Mario Run’s iOS release on Dec. 15, Super Mario Bros. creator Shigeru Miyamoto appeared on The Tonight Show to preview the game and the Nintendo Switch for Jimmy Fallon with Nintendo of America President Reggie Fils-Aimé. And while fans got to see plenty of new footage, they received another treat as Miyamoto picked up a guitar and jammed to the Super Mario Bros. theme song with the Roots. (Fallon even joins in a small but vital role.)

Smooth and modern yet recognizable, we already have it on repeat. Now can we get it as an add-on in future Mario games?