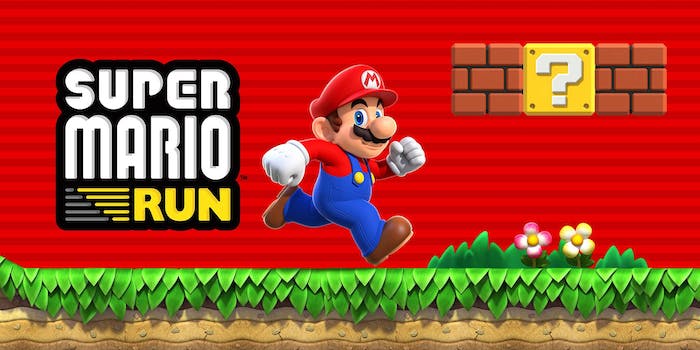 Don't worry: You don't have long to wait.

At September’s iPhone keynote presentation, Super Mario creator Shigeru Miyamoto made a surprise appearance on stage to unveil a collaboration between Apple and Nintendo.

Super Mario Run, an infinite runner set in the Mushroom Kingdom, was briefly teased for a release later this year. Today, Nintendo Mobile’s YouTube channel debuted an introduction trailer highlighting many of the game’s features, as well as a price and release date.

Starting on Dec. 15, iPhone and iPad users will be able to play some of the early levels and modes for free. The full game will unlock for $9.99 on the App Store. Super Mario Run is also coming to Android at a later date, and will likely launch for the same price.

The gameplay lets players control Mario as he runs across familiar Super Mario Bros landscapes. Tapping the screen will make Mario jump, and holding a finger down longer extends the time Mario spends in the air. In the gameplay above, we can see Mario exhibiting some parkour style moves as he hurdles Koopas and Goombas.

The main mode of Super Mario Run has Mario picking up coins, some of which he will lose if he falls off the stage but the game will also feature other modes. Kingdom Builder lets users decorate their own corner of the Mushroom Kingdom and Toad Rally has you racing against your friends.

#SuperMarioRun jumps and runs on iPhone & iPad Dec 15th for $9.99! Sign up to be notified when the app launches: https://t.co/TycpuPI3jN pic.twitter.com/W6ukNFZI3A

Unlike Pokémon Go, this game was actually developed by Nintendo. It is one of its new slate of mobile games, including the already launched Miitomo and planned Fire Emblem and Animal Crossing experiences.