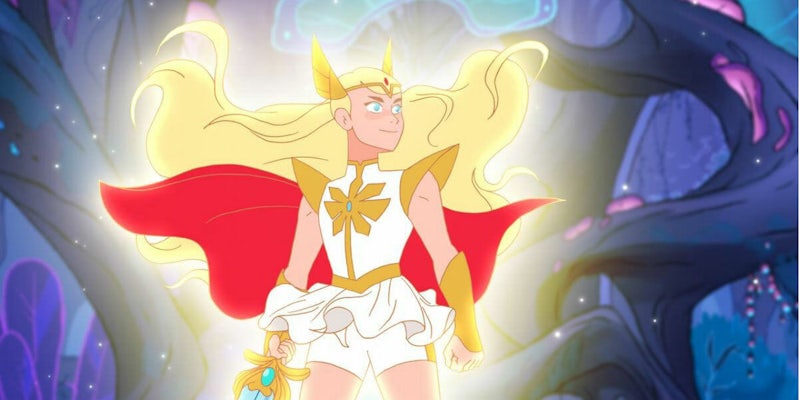 Leave it to a small group of angry men to try and ruin a good thing.

She-Ra, the ’80s cartoon heroine and offshoot of He-Man, is getting a Netflix reboot helmed by the cartoonist behind the popular and feminist Lumberjanes and Nimona. The character of She-Ra has also gotten a huge redesign, something a bit younger, less sexualized, and more akin to Steven Universe’s large, exaggerated shapes or Voltron’s clean, anime-like angular shapes. This has upset some dudes concerned about cartoons not meant for them, saying the new designs look too “boyish” and have lost the sexuality of She-Ra’s original incarnation.

Backlash against women-led pop culture reboots has been common in the age of Twitter. But this time, She-Ra fans have had plenty of fun ragging on these guys for their sexist tweets and weird YouTube lectures.

if you're trying to make your girls look like boys for your show then you are not actually fighting for equality you're proving that men is the superior gender and taken more seriously than a beautiful women, you're only helping sexism not fighting it pic.twitter.com/9WSiq7wtuZ

Some YouTube creators have also taken to posting videos comparing the modern She-Ra to a man, swapping out the character’s hair to supposedly make a point that without curly blonde locks, she could look like a generic male warrior. She-Ra fans of all backgrounds were quick to push back.

“We promise the Care Bear reboot will have tons of boobs,” storyboard artist Kristen Gish wrote on Twitter.

Dear men complaining about She-Ra,
The animation industry has heard your complaints and we’re taking them into consideration. We promise the Care Bears reboot will have tons of boobs. You’re welcome.

Totally saw someone from my childhood who literally beat me up for liking She-Ra while presenting as a boy. Now he has very strong opinions about She-Ra's reboot design. It, apparently, was very important to him growing up.

Fuck these men. So done with them.

As a Youth I literally got MADE FUN OF by other boys for preferring She-Ra to He-Man, so it’s pretty funny how those boys have grown up and now think they somehow hold domain over She-Ra??

wait not “funny” what’s the other thing?

"The new She-Ra looks too much like a man"
Meanwhile me, a teen girl, in high school and college: pic.twitter.com/BIENr6dKjy

Besides the backlash against the backlash, some of the She-Ra fan art has just been downright astounding.

Showrunner Noelle Stevenson has been well aware of the love being shown to She-Ra, and she’s thankful for the counter-protest.

“So overwhelmed by the outpouring of love today for She-Ra! Thank you so much for the fanart and kind words. I hope you love the show when it comes out!” she wrote on Twitter this week.

The She-Ra reboot returns to Netflix on Nov. 16.