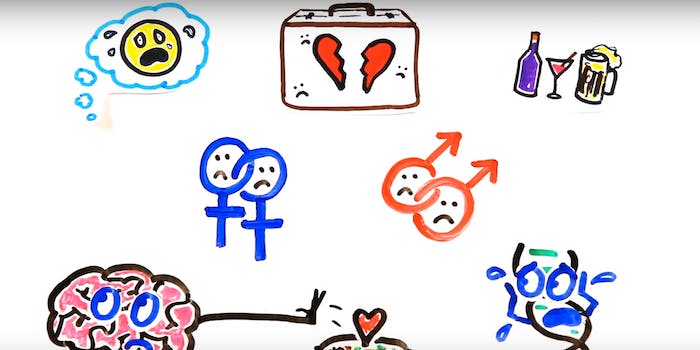 Exploring the science of monogamy and why we cheat

It’s not just a human thing.

This week AsapSCIENCE delved into the science of cheating, exploring the potential biological factors lying within our genes and brains that may play a role when we cheat on our significant other.

It’s a fascinating video that covers a lot of ground, including the relevant point that most studies done in human couples focus on heterosexual relationships, leaving data on gay and lesbian couples sorely lacking.

We just had a few things to add.

The dirty little secret of the animal-behavior field is that the species of birds, rodents, and apes whose life-long monogamous relationships we put on a pedestal don’t really deserve to be there. In other words, monogamous animals cheat on each other, have longstanding affairs, and divorce each other too.

It’s worth noting that using terms like “cheating” and “divorcing” when discussing mating behavior is enough to ruffle any animal behaviorist’s feathers. It’s a big no-no to assign animals human traits, or “anthropomorphize” them. Doing so suggests that animals have the same motives and thinking behind their behavior as humans, when in reality we know very little about the true motives or thoughts driving animal behavior. We’d need to be able to actually talk to them and ask them what they’re thinking to know that for sure.

Regardless, animal species that predominantly stick with one mate for life, or even for a single mating season, have been reported to stray from that relationship or end it all together. So it’s not like going over to the neighbor’s house for some afternoon delight while your spouse is away is unique to humans.

One report found that male aardwolves, an animal thought to be monogamous, tend to visit more than one lady-wolf’s den to mate. One possible motivation is to spread their genes as much as possible, the researchers said. Another report observed similar behavior on the part of male indigo buntings, a type of bird.

It’s not just the boys, though. Female animals cheat too.

Sometimes parrots even leave their partner for their side-parrot. Or some animals leave a relationship because their mate can’t have kids.

You get the picture.

It’s not clear if humans are meant to be monogamous

AsapSCIENCE covered a lot of the potential biological reasons animals, including humans, may be monogamous when they talked about genetics and levels of the hormone vasopressin. But there are ecological reasons as well.

Monogamy in animals comes in two forms: facultative and obligate monogamy. Facultative monogamy happens when individuals of a species are generally solitary and far apart, so when you find a suitable mate you tend to stick with that one. Obligate monogamy tends to arise when animals need a lot of care and resources when they’re first born (like humans do.) As the hosts of AsapSCIENCE put it, it’s easier to care for little ones when you have a mate who can go out, find resources, and bring them back to you.

But the aardwolves are obligate monogamists, yet the males seem to do just fine visiting multiple dens. Researchers are now suggesting that they’re socially monogamous: committed to raising their young with primarily one partner but still mating with others on the side.

Some evolutionary psychologists believe that men are hard-wired to sow their wild oats and father children with many women. Women, on the other hand, must invest a lot of energetic resources into childbearing, so they tend to stick with raising just a few kids. But human babies are uniquely needy among mammals, leading some researchers to conclude men had to adapt to a culture requiring sexual monogamy to essentially see their return on their genetic investment. (Make sure the kid survives to the point where it can have kids of its own, in other words.)

This runs into the the difficult issue of culture and biology being extremely intertwined. It’s hard to say if monogamy came about due to cultural forces or if humans literally evolved to be monogamous. This, and virtually all other hypotheses put forward by evolutionary psychologists, is also totally unknowable without a time machine. These are all criticisms lobbed at the field of evolutionary psychology as a whole. That, and the fact that conclusions of the same people within the field are often used to justify bad behavior like cheating or even rape. So take it with a grain of salt.

What we do know is that most Western cultures that embrace monogamy also make a taboo of cheating and culture is a strong driver of human behavior. But as the polyamory community grows, and stigma against it slowly diminishes, monogamy may not be the dominant option for human relationships forever.