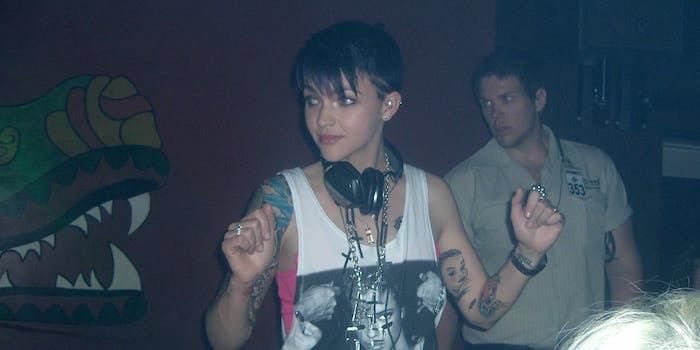 Some fans seem to think she's not 'gay enough' for the role.

Can we please try to go just one week without a celebrity being hounded off social media by so-called “fans”? This time it’s Ruby Rose, whose only crime was to get cast in the new Batwoman TV show. And surprisingly enough, she wasn’t reacting to harassment from homophobes.

Batwoman is gay, so the CW sought out a queer actress when casting the role for TV. The network eventually decided on Rose last week, who is best known for her roles in Orange Is the New Black and action movies like John Wick: Chapter 2. She identifies as lesbian and genderfluid and has said in several interviews that she first came out as gay at 12 years old.

However, some fans didn’t know this was the case—or thought that Rose was bisexual and therefore “not gay enough” to play Batwoman—and expressed outrage about her being cast as a lesbian superhero. Here’s what she tweeted on Friday, before quitting the platform:

Where on earth did “Ruby is not a lesbian therefore she can’t be batwoman” come from – has to be the funniest most ridiculous thing I’ve ever read. I came out at 12? And have for the past 5 years had to deal with “she’s too gay” how do y’all flip it like that? I didn’t change.

Queer representation is always a complicated issue, especially the question of whether queer characters should only be played by actors of the same sexuality. But in this case, the response from fans has been embarrassingly messy. Instead of voicing support for a major superhero franchise casting a lesbian actress in a lead role, many people reacted by policing her public image as a queer celebrity.

In addition to concerns about Rose’s acting skills (which we don’t recall being a problem for other DC shows like Arrow and Gotham) and misconceptions about her sexuality, there’s a common belief that she’s more “for straight people” because straight women feel comfortable saying they have “girl-crushes” on her. And sure, maybe that last point is a little cringe-inducing, but it’s not Rose’s fault, and it shouldn’t have a negative impact on her career.

At this point, fans need to take a step back and consider how revolutionary this casting choice is. Rose is a genderfluid lesbian who doesn’t conform to the typical standards of femininity on American TV. Hell, it’s rare enough to see women with short hair, never mind an androgynous actress who discusses gender identity in interviews. Even five years ago, the idea of a lesbian Batwoman TV show would’ve been unthinkable. The fact that Rose wound up quitting Twitter due to backlash from her own community is nothing short of shameful.