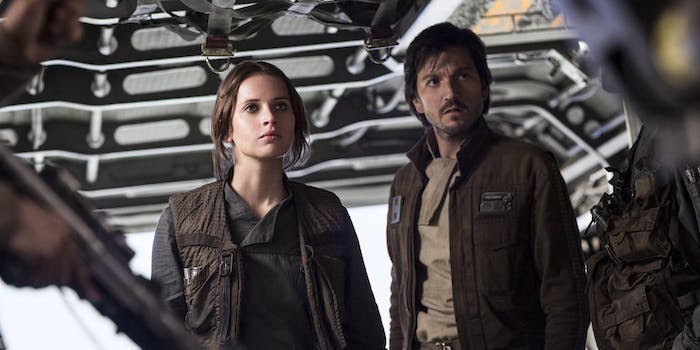 Photo via Rogue One

If ‘Rogue One’ is so progressive, where the heck are all the women?

'Rogue One' may have a female lead, but it's nowhere near as feminist as 'The Force Awakens.'

This article includes no major spoilers for Rogue One.

The idea that Rogue One is groundbreakingly feminist has always been pretty bizarre. Jyn Erso’s protagonist status is equal to Rey’s in The Force Awakens, and besides: Every other main character is a man.

While Rogue One was being promoted (and protested) as a female-led sci-fi blockbuster, its trailers remained noticeably male-dominated. Now we’ve seen the film, we can confirm it features the worst gender imbalance since the original Star Wars trilogy.

We counted seven women among the dozens of speaking roles in Rogue One, massively outnumbered by entire armies of men. There’s Jyn Erso, obviously. Then there are two minor supporting characters (Rebel leader Mon Mothma, and Jyn’s dead mother), and four more with a couple of lines of inconsequential dialogue. If you’re overly charitable, you might also include the non-speaking roles for a girl and her mother in one action scene, but otherwise it’s an endless sea of dudes.

By comparison, there are eight or nine male characters just in the main cast, filling the entire Rogue One team and all of the villain roles. On top of that, there’s at least another 20 male rebels, politicians, and Empire officers with speaking roles in the supporting cast, plus memorable cameos like Darth Vader and Bail Organa. Even the background extras are men, exceeding the typical (although still appalling) 17 percent ratio for women in Hollywood crowd scenes.

After The Force Awakens, which included several women in the main cast and more in supporting roles, Rogue One‘s casting choices are embarrassing and exclusionary. Either the filmmakers tried to “balance out” the female lead by surrounding her with men, or they simply didn’t consider that women should be present in a war story. Both options suck, especially when Felicity Jones has spent so much time discussing Jyn Erso’s supposedly progressive, feminist role during the film’s press tour.

If you haven’t seen Rogue One yet, or are planning to rewatch it soon, keep an eye out for women. Once you notice their absence, you won’t be able to stop. The Rebel Alliance is populated by male warriors, male politicians, male engineers. The stormtroopers are genderless but male-voiced when they speak; the Death Star scientists are all men. Even in the bunkers and bars and street scenes, women are a minority.

Was the galaxy’s female population wiped out in some horrifying massacre between Revenge of the Sith and A New Hope? Or did Rogue One‘s creators simply forget that women have an equal part to play beside the men?