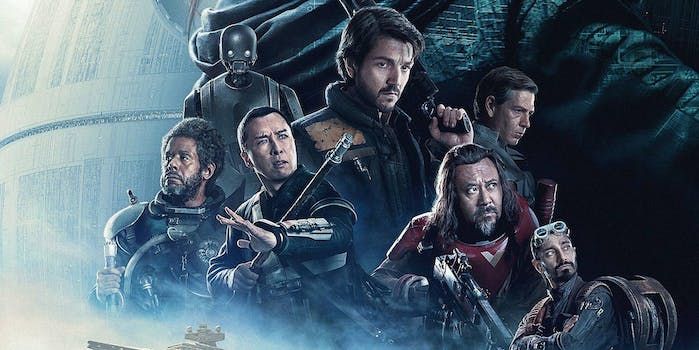 Better tell that to the rebellion.

Disney CEO Bob Iger claims that Rogue One, a war movie about an uprising against a fascist dictatorship, does not include any “political statements.”

This was Iger’s response to a highly publicized hashtag campaign, #DumpStarWars, which accused the movie of having a pro-feminist, anti-Trump agenda. The hashtag is associated with the alt-right movement, with one supporter already suspended for making antisemitic remarks while threatening to boycott Rogue One.

Describing the protest campaign as “overblown,” Iger told The Hollywood Reporter, “Frankly, this is a film that the world should enjoy. It is not a film that is, in any way, a political film. There are no political statements in it, at all.”

As THR points out, Rogue One screenwriter Chris Weitz tweeted last month, “Please note that the Empire is a white supremacist (human) organization.” The tweet has since been deleted, but it doesn’t help Iger’s rather unconvincing attempt to paint Star Wars as neutral, apolitical entertainment.

Rogue One, which stars a racially diverse cast of characters battling an army of Nazi-inspired villains, is projected to earn about $300 million on opening weekend.