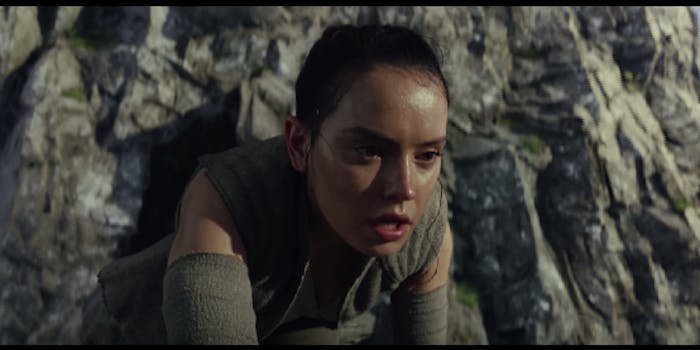 Rey finally gets her own ‘The Last Jedi’ action figure

Nobody wants a repeat of the #WheresRey controversy.

When the first major Star Wars film in years hit theaters in late 2015, many fans were distressed to find that the movie’s protagonist, Rey, didn’t get the same treatment in the action figure department as other, lesser male characters. In short, there was no Rey action figure.

But it seems like Hasbro received the message, and there will be a Rey figure for sale alongside the release of the sci-fi franchise’s latest film, The Last Jedi. In fact, it’s already out, possibly sitting on a toy store shelf somewhere near you.

When The Force Awakens came out, Hasbro was hit with criticism for failing to initially release a Rey figure, despite rolling out figures of characters like Finn, Kylo Ren, and a random stormtrooper. It wasn’t just an issue with her representation in the action figure market; she was also conspicuously left out of the film’s Monopoly board game version, an oversight that The Force Awakens director J.J. Abrams specifically condemned and one which went uncorrected for more than a year after the fact.

Basically, fans of Star Wars and of Rey were given every reason to fear she might get the short shrift again.

This time around, however, there is already a standalone Rey on toy store shelves, part of the early merchandising blitz in advance of the new film’s Dec. 15 release date. Which means fans of the iconic sci-fi epic’s latest hero who want to throw down for a few action figures won’t be left out in the cold this time.