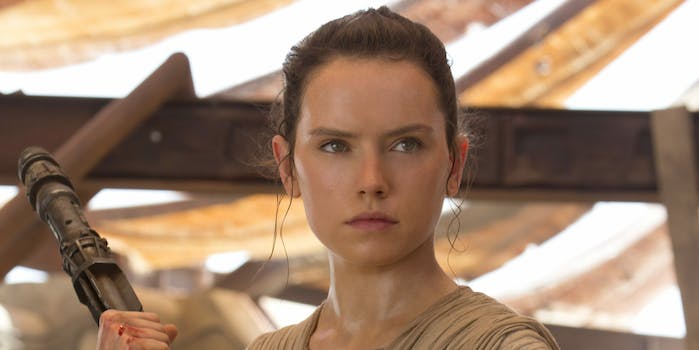 Keeping the 'bro' in Hasbro.

It cites “insufficient interest” as its reason for holding off on the release—a curious statement considering Hasbro agreed to make the figure after broad internet outcry. The Pawtucket, Rhode Island,-based company told the Associated Press it manufactured the Rey piece like it promised in 2016, but game sets with Rey included still aren’t available for sale in the U.S. People who have purchased an all-male game “can request a Rey from customer service,” spokesman Julie Duffy said.

The AP also points out that it’s unclear which markets the Rey token is available in, since a British father ran into the issue as recently as April:

The main character’s continued absence inspired a revival of the hashtag #WheresRey this week, which is how fans got Hasbro’s (and J.J. Abrams’) attention in the first place.

Why is this still an issue @Hasbro?! She's the main friggin' character. Get it together. #wheresrey #StarWars #TheForceAwakens #TheLastJedi https://t.co/XPeVXimanp

Where is the character Rey in the "Star Wars" version of Monopoly? In a galaxy far, far away, apparently. Story: https://t.co/eLFztINl10 pic.twitter.com/nJRFZU0Yij

PR-wise it’s not a great look for the toy company.

Previously, Star Wars fans have clamored for more Rey toys with a positive response from Disney, so hopefully Hasbro won’t be too far behind.

Update 3:54pm July 14: Star Wars: The Force Awakens director J.J. Abrams has again weighed in on the absence of a Rey Monopoly figure.