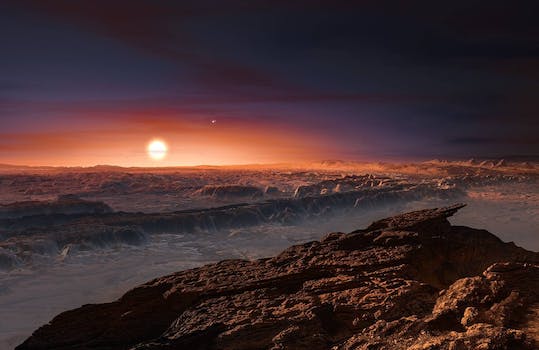 Researchers announced in the journal Nature that they discovered a planet orbiting our nearest celestial neighbor, Proxima Centauri.

The news is huge: This is the closest potentially habitable planet to Earth. There will never be a closer one discovered.

A mere 4.2 light years, or 24.7 trillion miles away, the small, probably rocky Proxima Centauri b circles the dim star every 11 days. Given that the star is much dimmer and cooler than the sun, that actually is within the star’s habitable zone: the not-too-hot, not-too-cold area where liquid water may exist on the planet.

But there are a few issues: The nature of the star’s “wobble,” according to the Atlantic, may cause huge temperature fluctuations on the planet that may make it impossible for liquid water to exist on its surface. Researchers also aren’t sure if the planet has or could maintain an atmosphere.

It’s also unlikely that humans, at least in the current era, will ever be able to visit the planet. While 4.2 light years may not sound like a lot, it is. It would take the Voyager 2, traveling at 35,000 miles per hour and at the moment about 10 billion miles from Earth an additional 700 million hours, or just under 80,000 years to get there.

But that doesn’t mean the planet is useless to us. According to the Atlantic, within our lifetimes we will likely see telescopes that could tell us if the planet has signs of life. And that would be huge. It would confirm that we are not alone, suggesting that other life is not only present in the universe, but abundant.