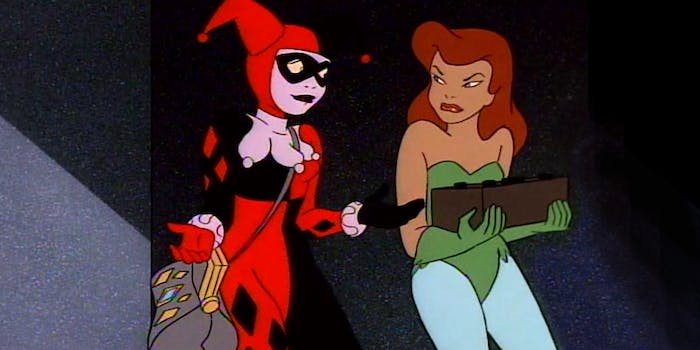 Screengrab via Batman: The Animated Series

It’s official: Harley Quinn and Poison Ivy are a couple

Gotham is about to get a whole lot of Pride flags.

If you’ve been holding out for iconic villains Harley Quinn and Poison Ivy to finally cement their relationship, you’ll be excited to know the wait is over. That’s right: After decades of the women’s same-sex relationship being hinted at, their relationship is finally discussed in the open in the new DC Comics: Bombshells issue.

Of course, as die-hard fans of the couple already know, the two have actually already shared a kiss in Bombshells #42, out last year. In the latest rendition of the series, Bombshells #79, however, their relationship is a central plot point.

A mysterious force blasts Harley Quinn & Poison Ivy out of the sky in the digital-first DC COMICS: BOMBSHELLS #79! https://t.co/tKVtJwuKaU pic.twitter.com/AQuRoG3Jvi

The Bombshells series is pretty unique: Many of us recognize Harley and Poison Ivy from their time in the classic Batman series as smart, sexy villains using their smarts to cause chaos in Gotham. Their flirtatious relationship has been well documented, but never explicit. Now, in this alternate world set in the 1940s, we see our favorite ladies pin-up style and totally in love.

Seeing their relationship unfold as a recognized plot device is gratifying for many LGBTQ readers, especially queer youth. While many of us read comics for personal enjoyment and as a means of escaping the outside world, it’s also normal to seek representation of yourself and people like you. Presenting openly queer people and couples can do wonders for LGBTQ youth who are questioning their identities or are seeking positive representations of what it means to be queer in the media.

The Bombshell series is particularly promising, as it suggests that their relationship will be treated sincerely, and that the same-sex kiss was not a one-off plot point to shock readers.

You can read the latest chapter in the series today. The series is available for digital download via the DC Comics App, Readdcentertainment.com, iBooks, Google Play, Nook Store and Kindle Store.