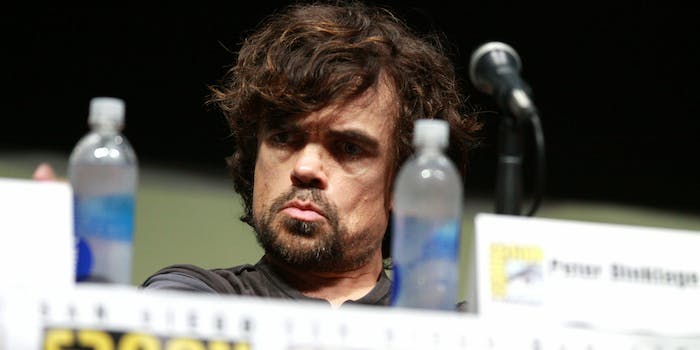 Who does Peter Dinklage play in ‘Avengers: Infinity War’?

We’ve known for a while that Game of Thrones star Peter Dinklage had a secret role in Infinity War. The most popular guess suggested he might voice a CGI member of Thanos’s team, the Black Order, but this turned out to be wrong. Dinklage’s role was actually bigger than expected, with more memorable screentime than some of the established Avengers.

Dinklage plays Eitri the Dwarf—that’s dwarf in the mythological sense. He’s actually a giant compared to humans, hailing from Nidavellir, one of the Nine Realms of the Thor franchise. Naturally, his role ties into Thor’s storyline.

As in Norse mythology, Marvel’s dwarves are expert metalworkers. Eitri is their king, and Thor believes he can build a weapon capable of killing Thanos. In the same way that Captain America gets a traditional action role in Infinity War while the Guardians of the Galaxy are comic relief, Thor’s story takes place in a familiar genre: epic fantasy. He and Rocket Raccoon travel to Nidavellir, only to discover that Thanos has already killed most of the dwarves. Eitri is the only survivor, and the last hope to craft Thor’s new axe. This involves firing up a gigantic space forge, powered by a star.

As Marvel characters go, Eitri is much more obscure than Dinklage’s role as Bolivar Trask in the X-Men franchise. Eitri’s job in Infinity War reflects what you’ll find in the comics: He’s a character who appears when someone needs a magical weapon. (The Marvel Universe includes plenty of astrophysicists and newspaper reporters, but not many blacksmiths.)

How the Dwarves fit into the MCU

Infinity War is the first time we’ve seen Nidavellir or the Dwarves in the Marvel Cinematic Universe, although they do appear in a tie-in comic for Thor: The Dark World. If you’re into the cosmology of the Thor franchise, you may already have deduced how this fits into recent events.

For thousands of years, Asgard ruled at the head of the Nine Realms. Jotunheim, the planet of the Frost Giants, was Asgard’s conquered foe. Muspelheim is the flaming world where Thor fights Surtur at the start of Ragnarok, and Svartalfheim was the home of the Dark Elves in The Dark World. Judging by what Eitri says in Infinity War, Nidavellir was under Asgard’s protection. Unfortunately, Asgard just spent a few years being ruled by Loki, who totally ignored all his political responsibilities. This left Nidavellir open to attack from Thanos, who then forced Eitri to build the Infinity Gauntlet.