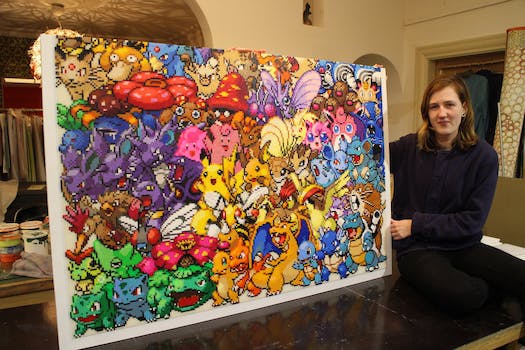 This 18-year-old from Denmark says perler art helps her clear her head.

Battling chronic pain since she was 11 hasn’t stopped Nete Hangel from catching all the Pokémon she can.

The 18-year-old from Denmark has embarked on a massive quest to weave thousands of decorative beads into a stunning Pokémon art project. When it’s done, this gorgeous mural will ultimately stand more than 7 feet high and contains more than 100,000 beads. 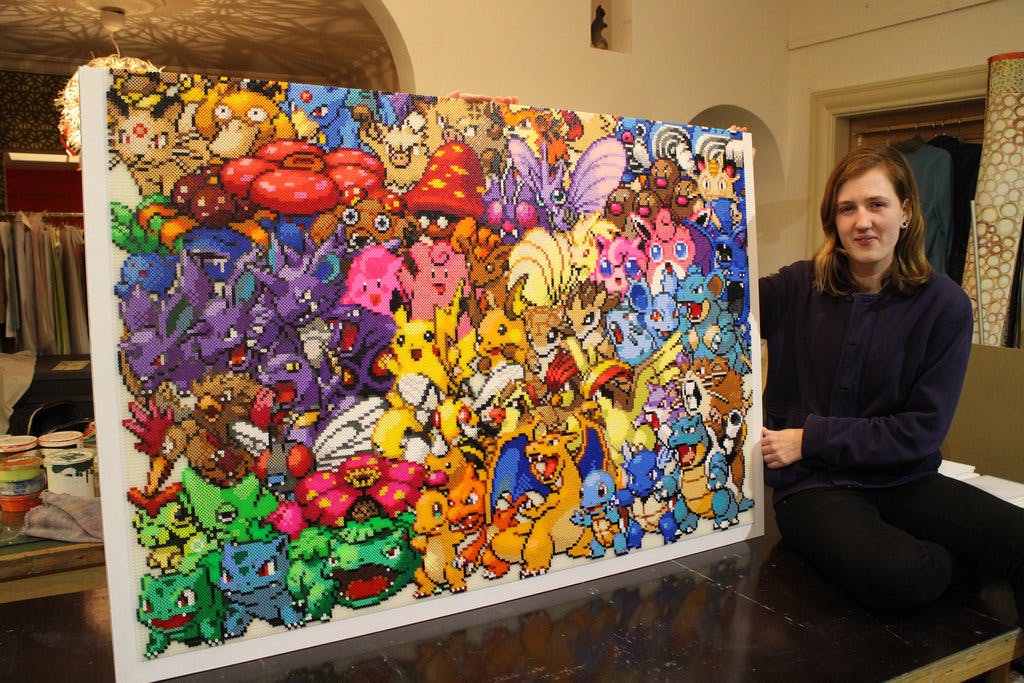 Her goal is to capture all 151 of the first-generation Pokémon in this massive two-part structure made from Hama and Nabbi beads. The current completed section alone contains 45,000 beads. 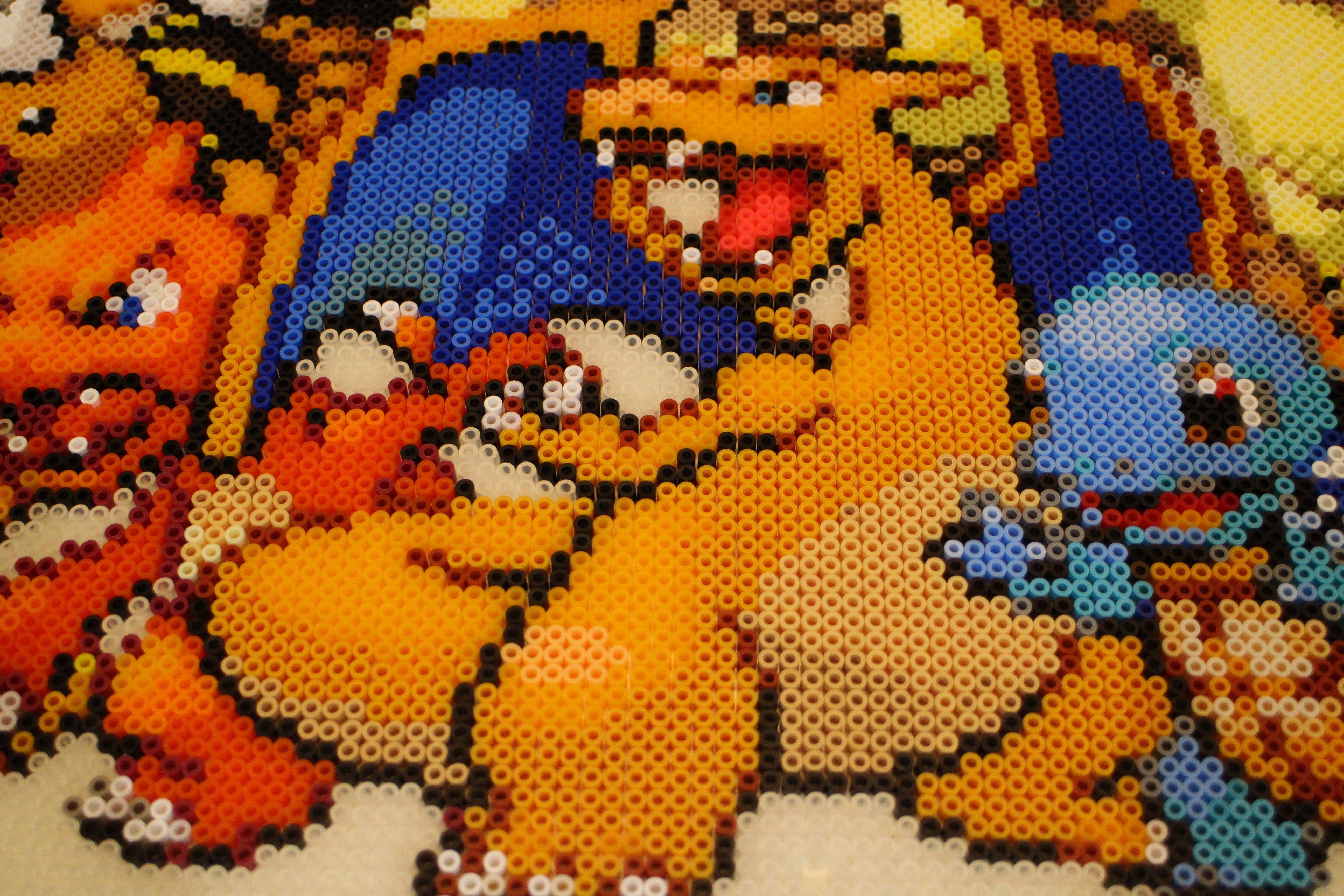 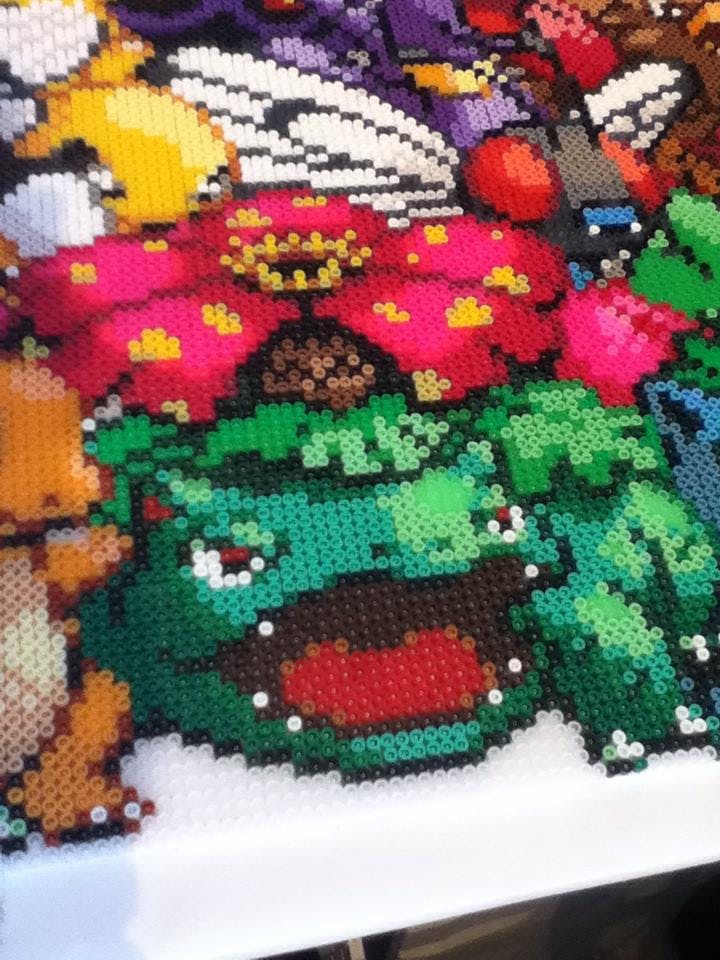 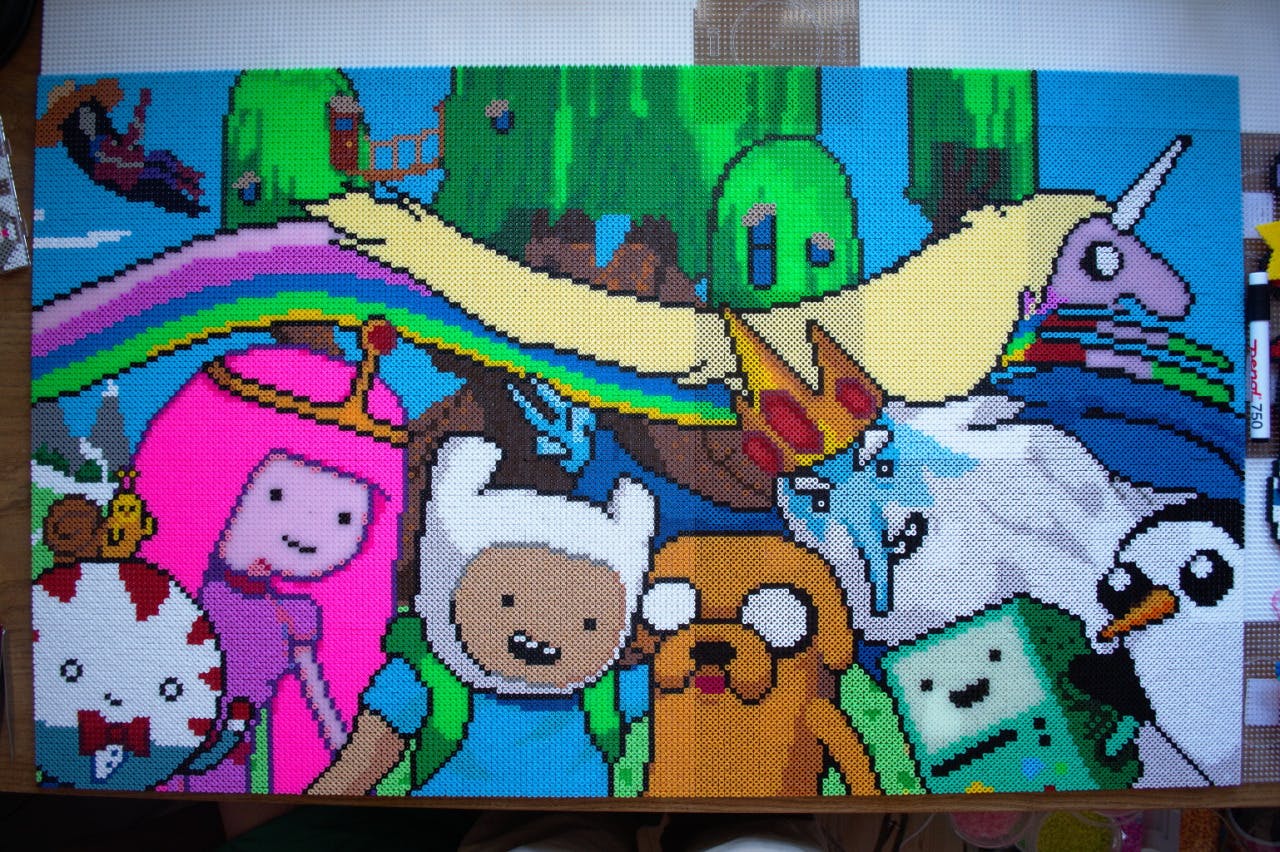 For Hangel, the hours of work spent crafting these intricate paintings are more than just mindless entertainment: They’re a way to cope with chronic pain.  At the age of 11, Hangel started experiencing severe chronic pain in her left leg. After repeatedly having her pain dismissed by doctors and being informed it was “all in her head,” she was ultimately diagnosed at age 14 with complex regional pain syndrome (CRPS), a rare condition that usually causes severe pain in arms or legs.

“I’ve become a boss at walking/floating down stairs without my left leg touching the ground/stairs,” she said in an email, describing how life with chronic pain is something she’s learned to live with and adjust to over the years. “It’s not because you forget it’s there (not even on good days) but you kinda learn to accept/ignore it and not think too much about it.”

Hangel used to sail competitively but had to abandon her goal of being a ship’s officer after what she called “getting the ‘chronic’ stamp,” which made it “impossible/near impossible for me to get the further education and job I’ve wanted the last couple years.” She also had to slow down her education; she now makes the hour-long commute to Copenhagen for school, where she studies physics and math, three days a week.

At one point prescribed 24 painkillers a day to help her cope with the pain, Hangel began beading with plastic heat-fusing beads, commonly termed “Perler art” after the most common brand of plastic beads. She told the Daily Dot she advocates using the activity as “a form of meditation” and for “clearing your head.”

“It’s been a coping method and a thing I could do even if I couldn’t think straight because of pain and pain meds,” she said. 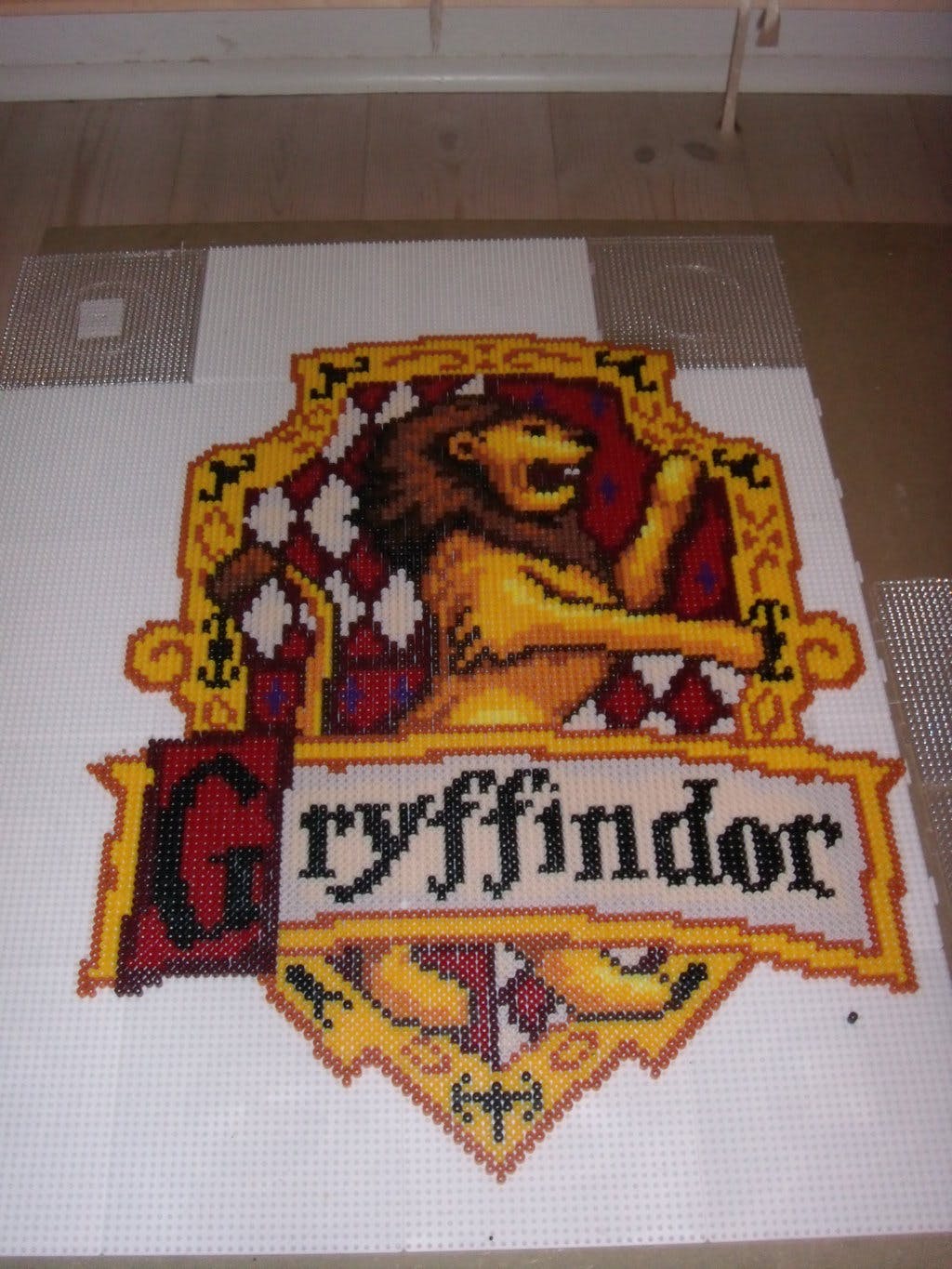 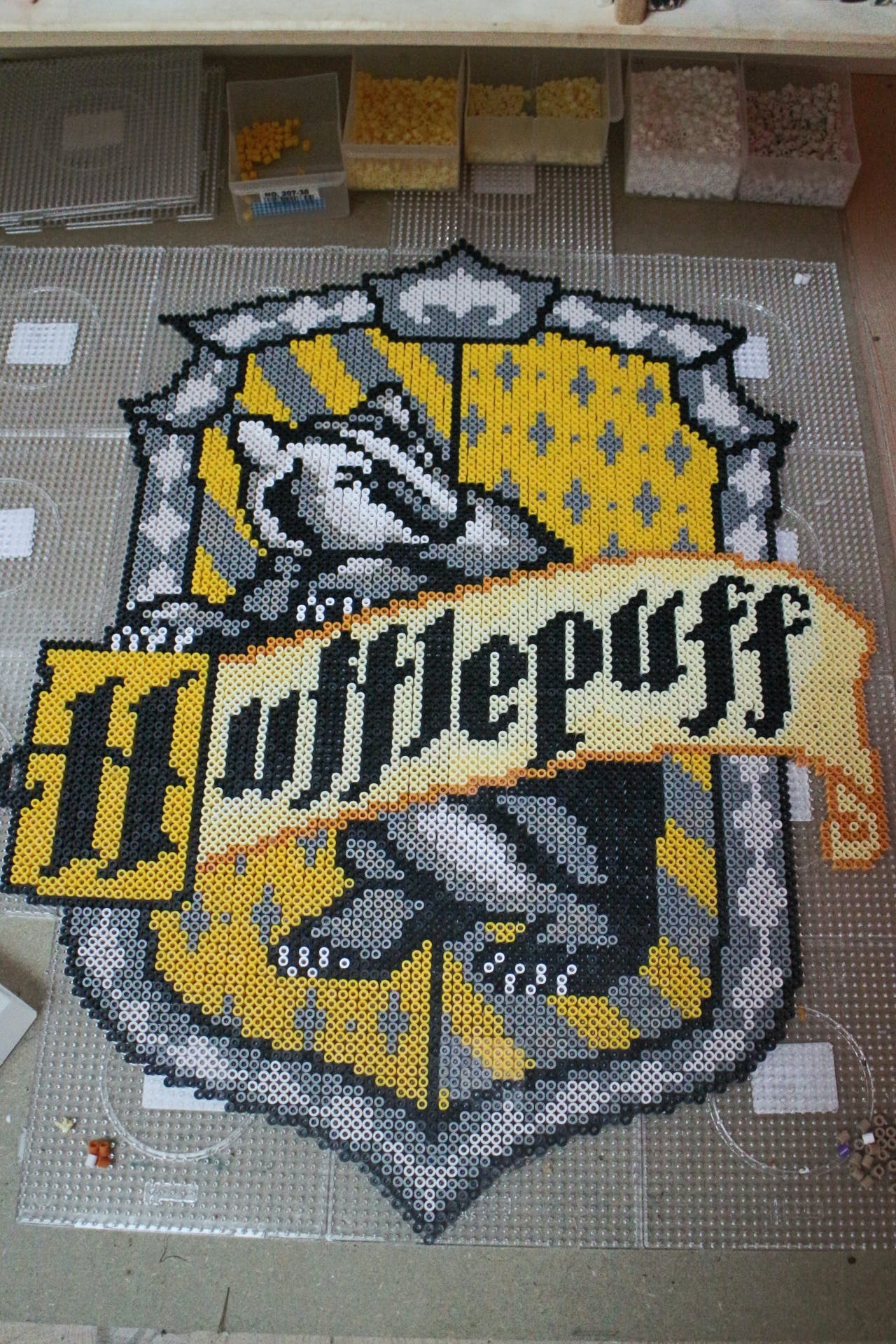 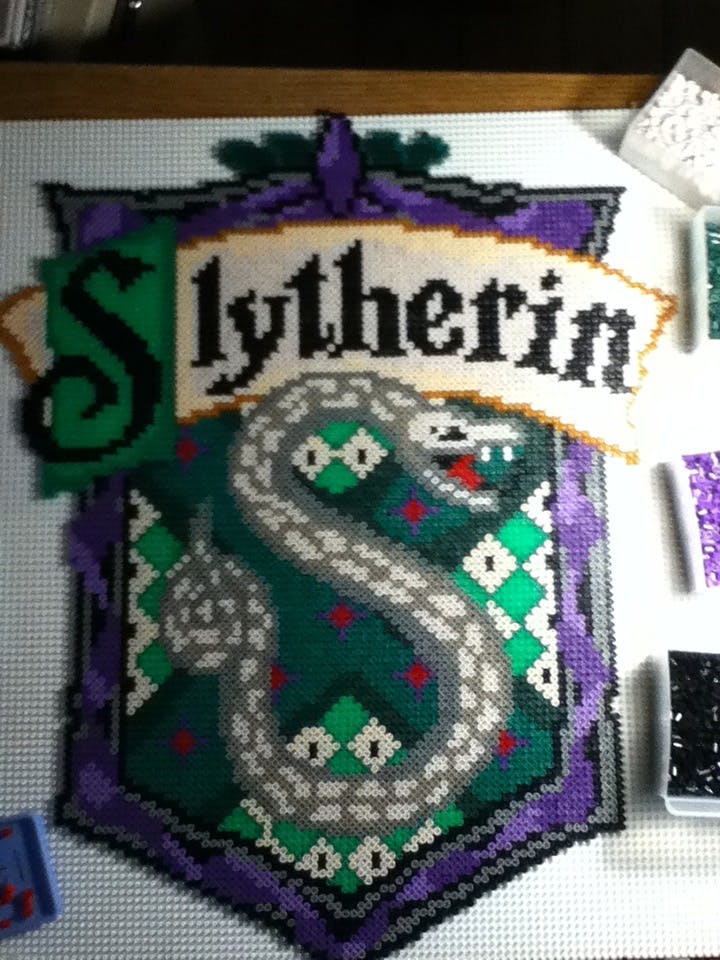 Prior to working on the Pokémon piece, Hangel became active in the avid perler beading communities on Deviantart and Tumblr using the online handle “mininete” due to her small stature. She told the Daily Dot her friends both online and off had been wonderfully supportive, but that she mostly interacts with them all through email or written correspondence these days. She frequently makes her beadwork projects as gifts for friends—but the Adventure Time and Pokémon projects were much more involved.

Here’s a look at the next part of the Pokémon project, currently still a work in progress: 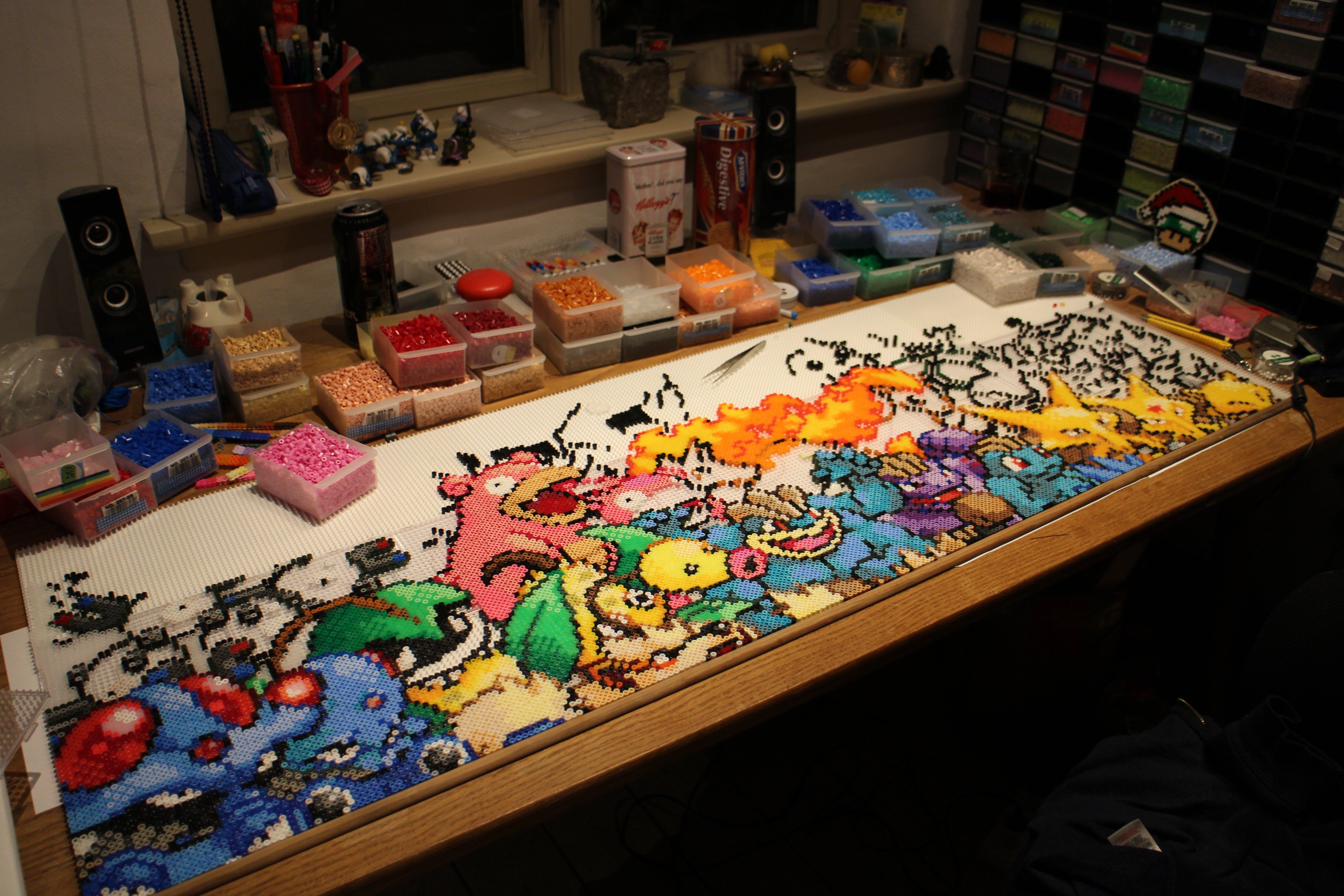 “I started my Pokémon piece around a year ago when I was in a really bad period pain wise, where I literally only left my room to go to the hospital,” Hangel said. “I worked a lot on it in that period where I went to the hospital for rehabilitation 4 times a week. Then when I got up and walking again, it got left behind because school took all of that little energy I had.” 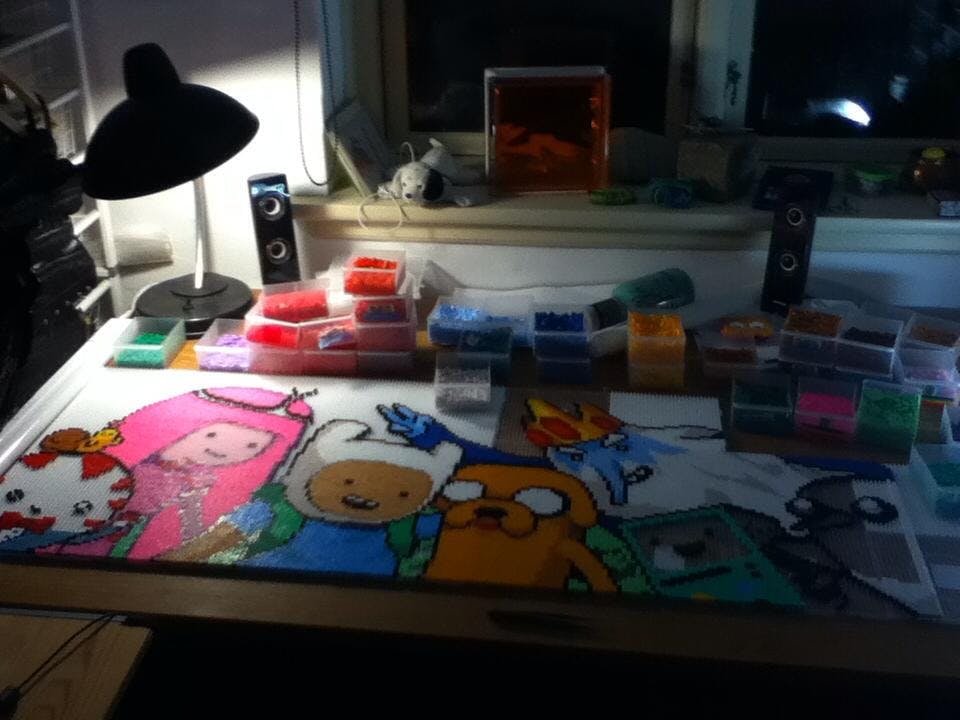 For perler enthusiasts looking to level up in their beadwork, Hangel advocates using color to add detail to patterns.

“I try to work with the nuances more and more,” she said. Hangel will often test her color patterns before embarking on a project. “I often make small color samples in 2*2 to 5*5 beads per color on another board, to see how well they match.”

She also stresses the importance of having a large color palette. “I have a quite big palette of colors to choose from that also helps.”

Not all beads and beadwork are the same: different brands melt differently and produce different effects when placed in a large pattern. Hangel prefers to use Hama and Nabbi brand beads and has a color palette of about 99 different colors. 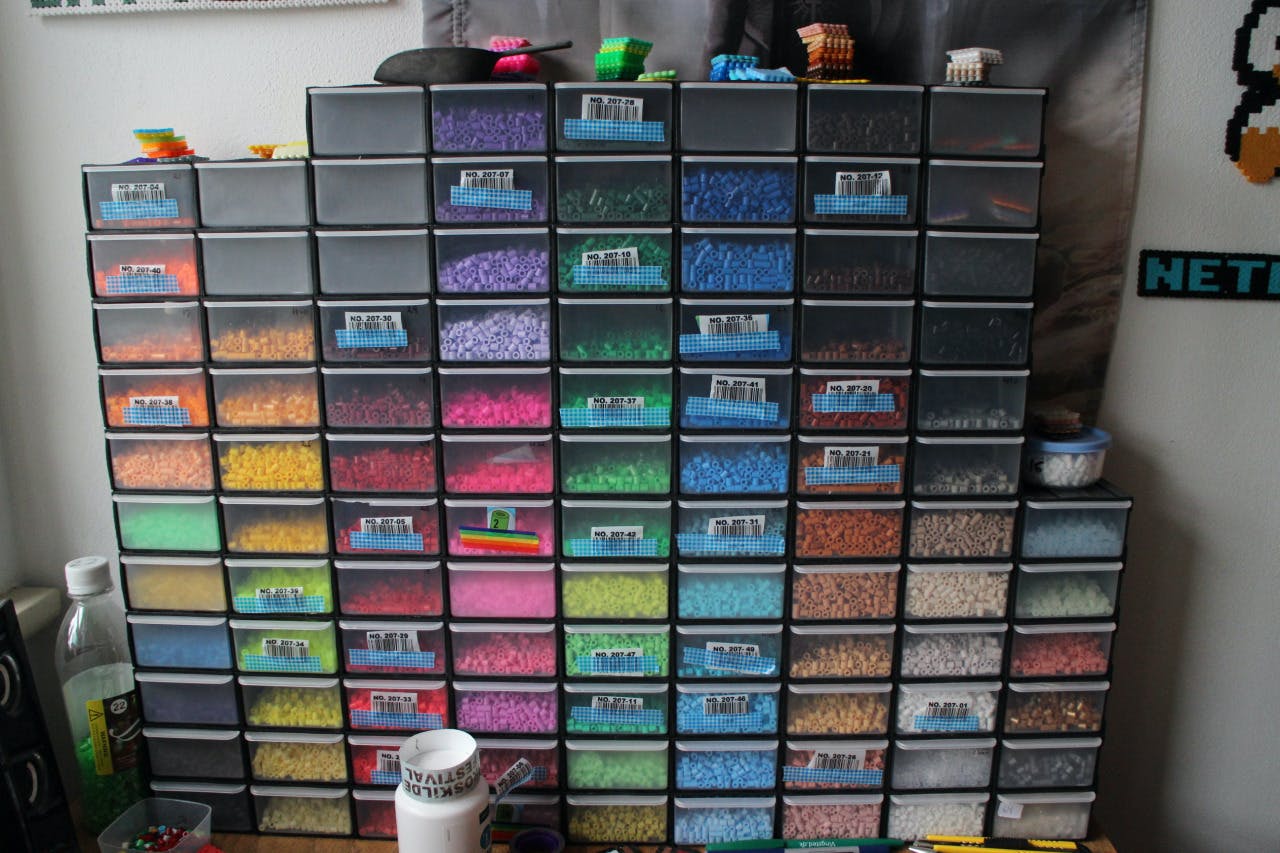 “If you want to invest some money in beads I would definitely recommend expanding your color palette, maybe just one or two colors at a time,” she said. “I’m personally thinking about expanding again and adding some of the Artkal beads when they become available in Europe/Denmark.”

She also encourages bead artists to experiment by using their own photo templates. Beaders can use computer programs like Perler, which allows users to create beading templates from photographs, modify them, and use different color palettes.

“Never follow a pattern (your own or someone else’s) like a slave,” Hangel said. “If there is a little thing that irritates you, try to change it. If you find one color just a bit off, look on your color palette and see if you have one that fits better.” 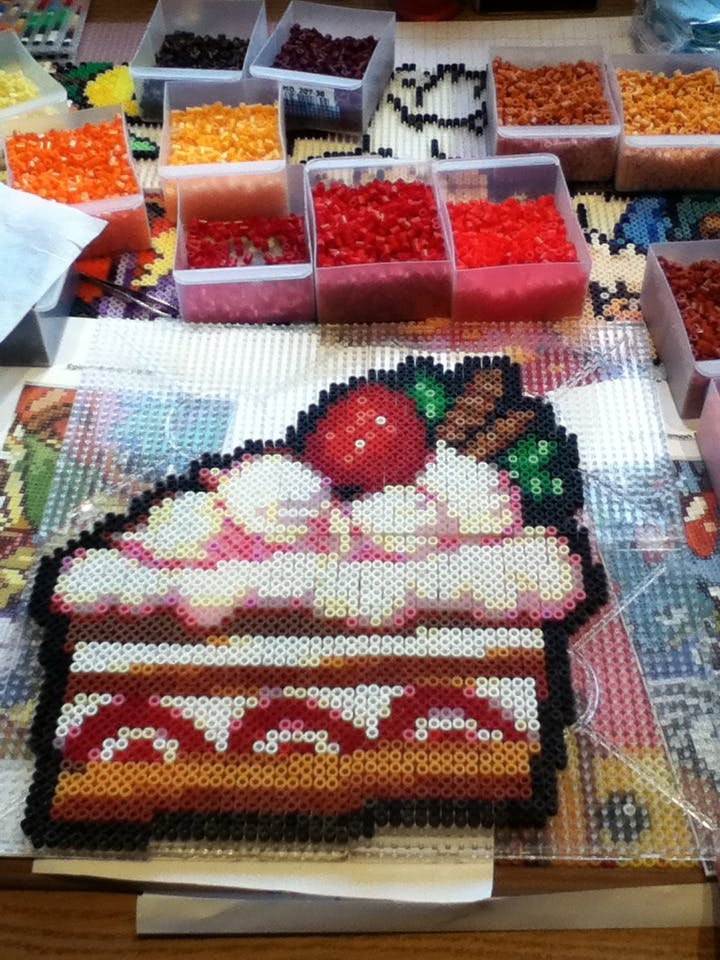 Above all, Hangel urges beaders to ask lots of questions. “Ask if you want help with something. Most other beaders, myself included, love to answer questions, both by beginners, but also by other beaders who just do stuff differently.”

Hangel enjoys sharing her wisdom with other learners. Though she can’t sail competitively anymore, she now teaches sailing to younger sailers.

“I’ve been sailing my whole life, and even though I can’t really sail competitively anymore, it’s still one of my big passions,” she said. “I’m training younger sailors and still sail a lot in our family boat.”

And while she can only go to school part time due to the CRPS, she says she has kept busy and now practices pole dancing in her spare time. “I’ve found that its one of the few sports I can do (almost freely) without making my pain in my leg worse.”

Clearly, Hangel is one fighter Ash would be happy to have on his team.