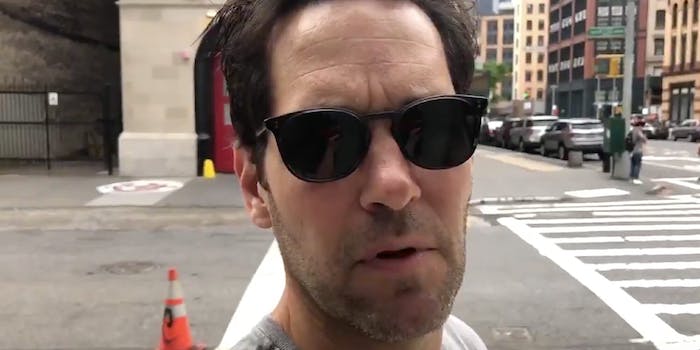 'Who you gonna call?'

Paul Rudd is joining the cast of the 2020 Ghostbusters sequel and he literally cannot contain his excitement.

Ghostbusters has been on the receiving end of criticism since it was announced in January, with folks saying that a second sequel effectively erases the 2016 all-female Ghostbusters film from canon. Directed by Jason Reitman, the son of 1984 Ghostbusters director Ivan Reitman, the sequel has also been condemned as a prime example of nepotism in Hollywood.

Perhaps because he does not have a Twitter, Rudd announced his joining the cast in a tweet from the film’s account, where he said that he “nearly slimed himself,” in his excitement to answer the call.

“When I heard that Jason Reitman was going to be doing a new version in the fall and my agents called him and said, ‘hey Jason, we hear there’s a part of a semi-young strapping man that needs to be cast,'” Rudd said in a promotional tweet posted on Thursday. “Who you gonna call?’ When I heard that they were going to call me, well, as you can imagine I nearly slimed myself.”

The removal of the 2016 film from the timeline of what is considered canon in the Ghostbusters universe has upset many fans. News of Rudd joining the cast of the sequel has drawn mixed reviews. Some fans are just now hopping on the train because they will watch anything Rudd is in, while others are questioning Rudd’s integrity for taking a role in this film.

“I can’t argue with this decision, simply on the basis that it’s Paul Rudd related,” @AndyKluthe said.

I can't argue with this decision, simply on the basis that it's Paul Rudd related. https://t.co/1IMQR3rdXo

Paul Rudd reacts to being cast in ‘Ghostbusters 2020’ 👻

The film will be a sequel to the first two films and ignores 2016’s all-female reboot pic.twitter.com/oWM7axT5Am

Then there is the third camp, where fans of the 2016 film are just happy to be getting another movie.

“I enjoyed the all female Ghostbusters, and I am really looking forward to this,” @LStevensAuthor said. “I adore Paul Rudd.”

I enjoyed the all female Ghostbusters, and I am really looking forward to this! And I adore Paul Rudd. https://t.co/94MrjLrnZQ

The film is slated to begin production this fall, releasing in July 2020.