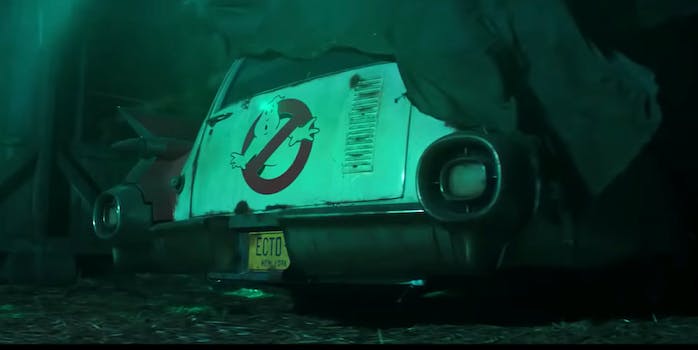 I mean, male Ghostbusters? The bros are taking over.

In an interview this week on comedian Bill Burr’s Monday Morning Podcast, Reitman expressed a desire to “go back to original technique and hand the movie back to the fans.” Reitman elaborates on this by saying “We went back and found the original physical vinyl letters that they used to create the Ghostbusters poster in 1984, [and] rescanned them, then our titles guys reprinted them and we filmed the titles. We shot physical titles with a light-and-smoke effect ’cause that’s how they would have done it back in the day.” A purely literal interpretation would imply that Reitman wants to rely on practical effects as a contrast to the CGI-filled endeavor that was the 2016 version.

By choosing to frame his film as a love letter to the ’80s, not speaking on the controversy surrounding the 2016 release, and effectively deleting the 2016 film from whatever Ghostbusters canon there may be, Reitman is giving in to the critics of 2016 movie who attacked it with sexism. To his credit, he told Entertainment Weekly last month that he liked the 2016 version but that this one would focus on the original’s “trajectory.”

In his overly canned diplomacy, it’s what he’s ignoring that’s landing as a tacit endorsement of fanboy culture.

The 2016 movie is more remembered for the controversy it generated rather than standing on its own as a separate work. Ghostbusters happens to be the subject that finally got alt-right charlatan Milo Yiannopoulos suspended permanently from Twitter. Yiannopoulos’ very public coordinated harassment against Ghostbusters star Leslie Jones led to the social network finally taking action against Yiannopoulos and terminating his account.

Now, new developments could mean that Ghosbusters (2016) will be lost to time and forgotten as part of the Ghostbusters franchise. All the harassment that director Paul Feig and actors Kate McKinnon, Melissa McCarthy, Kristen Wiig, and Jones had to endure in the lead up to the film’s release will have been for nothing.

Jones had this to say on Twitter concerning the outright erasure of her work: “So insulting,” she tweeted on Tuesday. “Like fuck us … It’s like something trump would do.”

Ghostbusters (2016) was by no means a masterpiece. It was enjoyable enough but by raking in only $229 million worldwide, it did fall short of the lofty expectations we hold of Hollywood blockbusters. However, because of the controversy leading up to the film actually coming out, it’s a miracle that the release of the film wasn’t an utter disaster.

As a reboot of the 1980s cult hit, the female-lead Ghostbusters was a lukewarm, mild product of the Hollywood movie-making machine that was exactly what it needed to be and not much more. As a case for representation, it showed that underrepresented demographics can have middle-of-the-road movies too. The movie functions as a cultural flashpoint but not so much as a cultural game-changer. Then again, it’s a screwball comedy about adults who fight ghosts with backpacks.

Ghostbusters (1984) was just fine. Ghostbusters 2 (1989) was pretty bad. Ghostbusters (2016) was OK. Twitter users are exasperated with Ghostbusters discourse and many point out the ridiculous nature of having such reverence for what really is just a goofy 1980s comedy.

not ghostbusters discourse again. please. please. i need to live

Reitman’s Ghostbusters is slated for a summer 2020 release because time is a flat circle and we’re all doomed to keep going through these same motions forever.