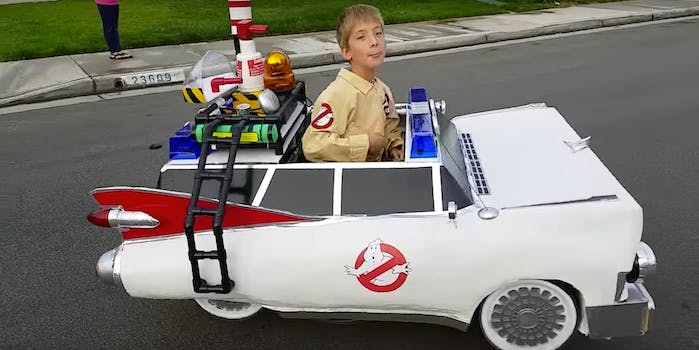 They just get better every year.

When Ryan Scott Miller and his 8-year-old son, Jeremy, built an incredible Star Wars snowspeeder Halloween costume that went viral last year, we couldn’t image the costume could be topped.

Miller posted a video this week showing off this year’s Halloween costume project, and it’s a jaw-dropping miniature version of Ecto-1 from Ghostbusters.

As Miller told the Washington Post last year, Jeremy has spina bifida, a disorder affecting the spinal cord, and he uses a wheelchair. Rather than it being a hindrance, the wheelchair is the perfect medium to bring the duo’s incredible costume ideas to life. In addition to the snowspeeder and Ecto-1, Jeremy has rocked a pirate ship, Captain America’s motorcycle, and the Batmobile.

According to a description of the Ecto-1 costume on Miller’s YouTube page:

We don’t know what the pair have in store for Halloween 2017, but we can’t wait to find out.