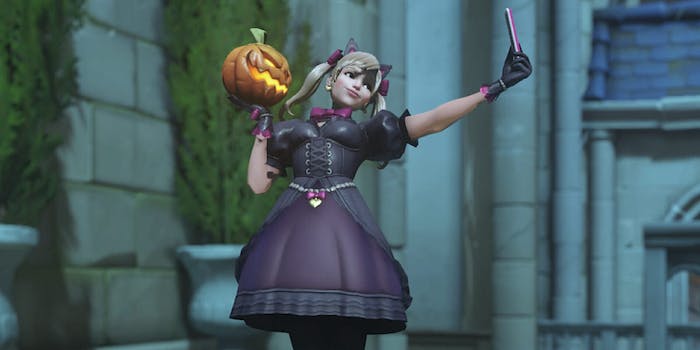 Overwatch’s D.Va goes viral after fans realize she takes selfies with her phone off

It’s that time of year again. Overwatch’s Halloween Terror 2018 event is here, and to celebrate the month, Blizzard just unveiled a new series of skins and emotes for the game’s characters.

But earlier this week, fans noticed something off about D.Va’s latest victory pose. Apparently, she’s taking a selfie with her phone off.

“Pumpkin Selfie” shows D.Va holding a jack-o’-lantern next to her head and posing for a photo with her arm outstretched. The pose, which appears after winning a match, references a highlight intro where D.Va snaps a selfie after popping her Self-Destruct ultimate. But on further inspection, one fan rotated D.Va around and realized that her phone screen is turned off. In other words, she’s just staring at her smartphone the entire time.

her phone isnt even on pic.twitter.com/kk3ll5qM1D

Fans quickly went to work speculating what’s up with D.Va. Maybe she has a privacy screen.

She could just be admiring herself in the phone’s glass mirror.

Her phone could’ve fallen asleep because she took too long to pose.

On second thought, most Twitter users agree that D.Va is just really high.

It’s how I take all my selfies too XD

Twitter quickly compared her to the classic calculator selfie Vine, where a bunch of women crowd around a smartphone to take a selfie with the back camera while using the calculator app.

reminds me of that one vine where the women are trying a take a selfie but it’s on calculator https://t.co/pUipcXiktb

Meanwhile, Overwatch fans are ready to protect their precious Dorito goblin at all costs.

Leave dva alone she saved the city for us https://t.co/f8QiCvxKyw

D.Va, we love you, but you may want to bring a lightning cable with you for your next Overwatch match. I’m sure there’s plenty of USB ports in your mech.