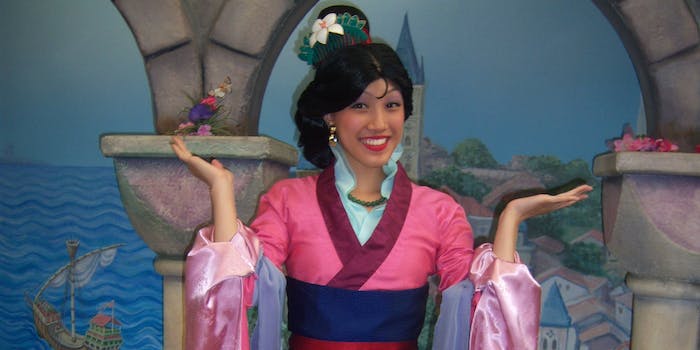 Fans are worried that Disney will whitewash ‘Mulan’

This petition to save Mulan's heritage may be based on a joke, but Hollywood's lack of diversity is serious.

Since the announcement last month that Disney is making a live-action adaptation of its animated film Mulan, fans of the story have been keen to make sure the title character retains her heritage.

So keen, in fact, that a Care2 petition begging Disney not to whitewash the famed Chinese heroine has gathered more than 35,000 signatures. The origin of the panic seems to be an April Fools’ Day joke that went viral on Tumblr after many fans took it seriously.

The post, which came on the heels of the Mulan live-action announcement, claimed that Scarlett Johansson would be playing Mulan. Though one reblog of the post actually rickrolled its audience, the original has racked up thousands of reblogs over the last two weeks—and many of them are missing the “joke.” 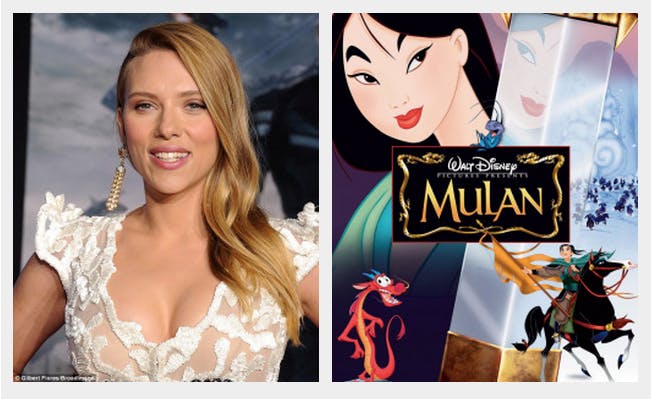 There are, after all, plenty of reasons for Tumblr users to miss the humor. Many fans still aren’t—and will never be—over the whitening of most of the main cast of Avatar: the Last Airbender in the disastrous Paramount film adaptation of the beloved TV series. The movie was vehemently rejected by fans around the world, who spent years boycotting casting calls and waging protests, all to no avail.

The controversy gave rise to the media watchdog site Racebending, which chronicles the practice of Hollywood whitewashing—the act of retconning or erasing ethnic character origins so that the characters can be played by white actors. This practice is closely related to the longstanding racist practice of white actors going blackface, yellowface, and brownface—playing characters of other races, often with exaggerated stereotyped features to make them look more ethnic.

Though whitewashing and racebending have been the subjects of ongoing controversy, the practice shows no sign of ending.

While ScarJo may not be donning yellowface for Mulan, she is playing a whitewashed role that originally belonged to an ethnically Japanese character in the upcoming live-action adaptation of the classic sci-fi anime Ghost in the Shell. And she’ll be voicing the part of the clever snake Khaa in Disney‘s upcoming remake of The Jungle Book, which, despite being set in India, has a largely multi-cultural cast.

In the case of The Jungle Book, Johansson’s casting is arguably a good thing. After all, the original Disney animated film is dripping with exaggerated racist stereotypes that the studio has been trying to live down for years, and the casting of white actors in those roles can only help negate the damage.

Mulan, on the other hand, is one of Disney’s most critically acclaimed films, often hailed as a groundbreaking moment for feminism in animation. Mulan is a Chinese hero whose legend comes to us all the way from the 6th century. She reportedly disguised herself as a boy in order to join the emperor’s army, then rose through the ranks and served for many years.

If hollywood white-washes Mulan I will be so angry lol like it’s fine that the details have been Disney-ified to become happy-go-lucky, it’s kinda nice, but if they make the actors and actresses white, I just, how??? What significance would hair-cutting have for a white lead? Knowing your place and speaking against your parents’ wishes? Honoring ancestors? Crickets? Beads of jade? Matchmakers? Dragons? So many aspects of the movie are deeply rooted in Chinese culture. There are Chinese actors and actresses in the wrold [sic]. Hire them and get it right.

The anti-whitewashing petition is part of a growing trend that has seen online activists bring significant attention to many of Hollywood’s quasi-racist casting decisions. On the Care2 platform alone, 45,000 people signed a petition protesting Johansson’s Ghost in the Shell casting, while 25,000 people criticized director Ridley Scott for whitewashing Exodus and over 80,000 people went on the warpath against Rooney Mara’s racist hipster Tiger Lily in the upcoming adaptation of Peter Pan.

The Mulan petition’s creator, Natalie Molnar, pointed out that at the opposite end of the scale is a push for greater diversity through trends like the #WeNeedDiverseBooks campaign.

Children benefit from finding themselves represented in fiction, which is part of why campaigns such as #weneeddiversebooks are so vital. [Whitewashing] also perpetuates a standard of beauty and goodness wherein whites are considered the ideal and norm despite that not only are Americans diverse, but the entire world is. As for the acting community, keeping diverse actors out of what should be diverse roles severely limits the number of roles they can get, especially a potentially name-making role such as Mulan‘s eponymous character would surely be.

The gap has prompted famous Asian-American actors like Sandra Oh and Dante Basco to create their own opportunities instead of waiting for the Hollywood establishment to deliver.

For fans who want Hollywood to join the 21st century with its casting decisions, venting frustration on the Internet is an increasingly potent option.

Disney has not announced a single cast member for Mulan, although the announcement of the film has led to lots of speculation and wish-list-making. At the top of the wish list is Agents of S.H.I.E.L.D.‘s Ming-Na Wen, who voiced Mulan in the original 1998 film.

Wow, so many tweets to @Disney announcement for a live-action #Mulan. Thank U4 wanting me 2B in the film! Tweet @DisneyPictures about it! xo

It remains to be seen whether Disney will give an Asian actress like Wen the chance to show off her skills in the role. If not, the Internet will be ready to respond.

Photo via lorenjavier/Flickr (CC by SA 2.0)