MTV’s Fandom Awards are just asking for a bloodbath

MTV apparently looked at Superwholock fandom and saw an opportunity for civil war.

Perhaps this is all a part of MTV’s secret strategy to declare Teen Wolf king of Tumblr after all the other fandoms lie fallen on the bloody battlefield.

But it seems that whoever thought to turn MTV’s recently announced Fandom Awards into a competition between fandoms may have forgotten to ask actual fans how they felt.

When we first heard about the Fandom Awards, we were surprised but unsure what to expect. It seems, however, that MTV has taken a page from fandom itself and launched a fandom voting challenge that pits fans against one another in an epic get-out-the-vote competition for… something.

Turns out fans will be voting for their favorite fandom in a number of categories: Best Fandom Forever, Breakout Fandom of the Year, OMG Moment of the Year, Fandom Feat of the Year, and ‘Ship of the Year. (MTV, can we talk about why you’re putting a ‘ in front of “ship,” a word which hasn’t been a truncation of “relationship” in at least two decades? Do we need to have words?)

In a nod to what a behemoth it has become within the fandom community, voting for the Best Fandom Forever award will take place entirely on Tumblr.

Our early prediction: The slash ship Destiel will narrowly edge out Sterek in a repeat of The Backlot’s last two slash tournaments. (Sterek won in 2012, Destiel in 2013). And Harry Potter will probably take home the prize for Best Fandom Forever, because we’re all duty-bound to vote for Harry Potter in all things.

If we survive the bloody melee, that is.

The goal of the Fandom Awards is partly pleasant. Some categories are designed to reward fans in new and active fandoms and celebrate the cool accomplishments that fans have managed to do in the past year. But it’s hard not to feel that the blatant emphasis on TV- and film-franchises is leaving out a lot. For example, the return of Sailor Moon to viewers in original format and as a reboot after almost 20 years is probably one of the year’s genuine OMG moments. But there’s no room for non-Western fandoms on MTV’s radar. Other obvious wins for fandom, like Glee‘s gay wedding between Kurt and Blaine, don’t make it onto the list either—although the controversial How I Met Your Mother finale, with an audience a bit outside of MTV’s targeted demographic, does. And there are other considerations, too:

Here’s a dire consideration: who ACCEPTS the fandom awards? How is THAT delegate chosen?

Then, of course, there’s the shipping category. 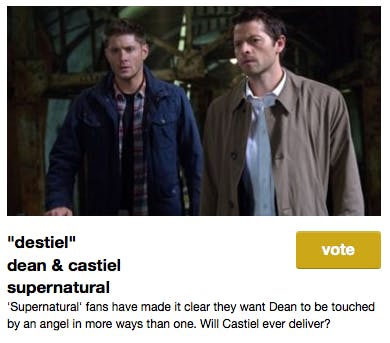 “Do they want people to die?” was the very accurate assessment of Tumblr user claryfraylife at the news.

Ship wars and fandom wars have long been the bane of many fandoms, with loud, hostile, and competing shippers being one of the hallmarks of things that can cause a fandom to die out or lose fans fast.

Tumblr has evolved a cultural etiquette of “don’t tag your hate” that attempts to cut down on the divisiveness of fandom’s natural tendency to love the thing they love more than that thing you love.

The vote seems to be bringing up age divisions as well as fandom divisions. The spirit of mass competition didn’t seem to go over well with longtime fans, several of whom complained privately to the Daily Dot that they were too old for this nonsense.  On Tumblr, where the voting for MTV’s biggest category of “Best Fandom Forever” will take place, most fans either hadn’t noticed yet or were eagerly promoting their own ships and fandoms. But older fans, like longtime fan Cleolinda, seemed to feel that MTV was co-opting a perfectly normal fannish concept—i.e., loving a thing—and turning it into an excuse to pit fans against one another:

“You realize they want you to fight each other like gladiators so they can make money off fandom, right? Make you fight over whose charity campaign (“Fandom Feat”) was more valuable? You think that they gain nothing from clickbait polls that will get 100,000s of hits? That they’re running that ~awards special~ commercial-free? ”Best Fandom Forever”? Get the fuck out of here.”

While Cleolinda’s cynicism is justifiable thanks to a long history of fans being exploited by corporations (looking at you, Amazon), it certainly won’t be the first time the media has used fandom contests and polls to draw hits. In 2012, Entertainment Weekly‘s summer shipping poll attracted so much derision for leaving out popular slash pairings that After Elton, now The Backlot, stepped in and instituted a hugely popular annual slash shipping poll. At least MTV’s contest is similarly slash-inclusive, though there’s no hint anywhere of femslash ships like the uber-popular Once Upon a Time ship Swanqueen.

Still, for those of you who like a prizefight, no one brings a crowd frenzy to the ring like fandom. And let’s face it—when was the last time you resisted an Internet poll featuring your favorite things? We’re guessing the real battle will be internal—as you struggle to choose between all the fandoms you love.

Check out the full list of nominees below. You can vote beginning today at MTV U.

Fandom Feat of the Year
Veronica Mars – fans were successful in funding a Kickstarter campaign to create the Veronica Mars film
Teen Wolf – fans raised more than $25,000 to build a wolf sanctuary
Community – the fandom kept the show on the air by petitioning for more episodes, while also getting back original writer Dan Harmon
Hannibal – fans used their power to get the show renewed for a second season
Supernatural – Mischa Collins and the fans of the series created “Random Acts,” raising money for charitable organizations