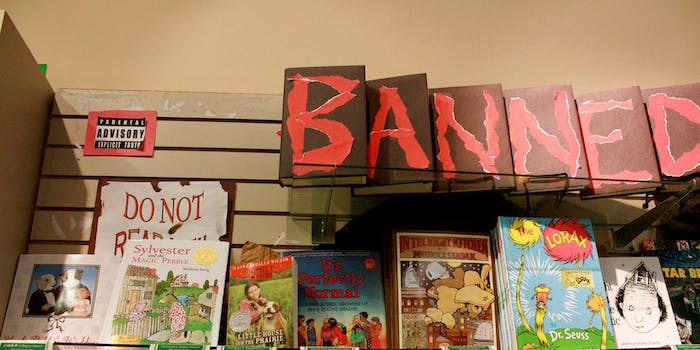 Once again, Young Adult and children's literature top the list of the books that scare us most.

The American Library Association has released its annual list of the most-challenged books in libraries across the U.S. And once again, Young Adult and Children’s literature dominates the list of books that scare us most.

One of the most interesting things about the ALA’s list, which documents books that receive frequent complaints and requests for removal in libraries and schools, is that the number declined sharply from last year. Only 307 complaints across the country were registered this year. For the entire decade from 2000 to 2009, only 5,100 challenges were filed.

That doesn’t make the challenges insignificant. After all, some of the books that have been frequent staples on the Most-Challenged list over the years are also among our most beloved classics: To Kill a Mockingbird. Harry Potter. Captain Underpants.

What? Captain Underpants is a kid’s lit classic. It just might be hard for some parents to see it underneath all the alleged offensive language, violence, unsuitability, anti-family content, and sexually explicit material—all things the series has been charged with over the five years it’s spent on the list since 2003.

After dropping off in the mid-2000s, Captain Underpants made a mighty comeback to top the list again in 2012 and 2013. But there were some other familiar favorites. Notably, The Hunger Games, which first appeared on the list in 2010, made a reappearance after dropping off the list last year.

Why exactly did offended readers want to send Katniss into the arena? Last year, they cited the book’s “religious viewpoint” and its unsuitability for the book’s targeted age group—a grim irony, since the book’s subject matter involves the unsuitability of teenagers being sent to their deaths.

Hunger Games clocked in at No. 5 on the list, after Captain Underpants, Toni Morrison’s classic The Bluest Eye, Sherman Alexie’s The Absolutely True Diary of a Part-Time Indian, and Fifty Shades of Grey.

Of all the books in the top five, The Absolutely True Diary of a Part-Time Indian deserves special notice. Published in 2007, this critically acclaimed, sharply political YA novel has been one of the top five most-challenged books in the U.S. every year since 2010. Just last week, parents in Idaho, a state that is home to five Indian reservations, controversially banned Alexie’s novel from the reading lists of several high schools.

But Alexie and Hunger Games author Suzanne Collins aren’t the only popular YA novelists to feel the heat from the list. For the second year in a row, John Green‘s first novel, Looking for Alaska, came under fire for containing depictions of drugs, alcohol, and smoking, for sexually explicit material, and unsuitability for its age group. Here we thought it was a trenchant coming-of-age story.

The prize for the most bizarre entry on this year’s list, however, goes to the random appearance of the classic work of Latino literature by Rudolfo Anaya, Bless Me Ultima. Despite its well-known interweaving of folklore and mysticism, the book was tagged for elements of “Occult/Satanism.”