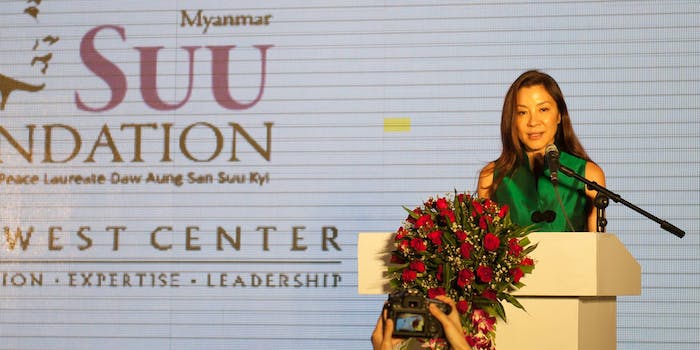 Michelle Yeoh will appear in ‘Star Trek: Discovery,’ according to producer

Fans are theorizing she may play the show's lead role, a lieutenant commander.

In an interview with Coming Soon, Meyer said, “I know Michelle Yeoh is in it.” CBS hasn’t officially confirmed the casting yet, but Meyer—best known as the writer/director of Star Trek: The Wrath of Khan—is one of the more prominent members of Discovery‘s creative team.

Already suffering from the delays and the loss of its high-profile showrunner, Star Trek: Discovery remains something of an enigma. The show is so secretive that a Twitter account belonging to Meyer’s dog is one of the few places fans can glean information from behind the scenes.

Some fans are theorizing that Yeoh will play the show’s lead role, a lieutenant commander in Starfleet. While this rank would generally suggest a younger actor, it’s possible the character could have been demoted, or began her career as an enlisted crewmember instead of an officer who attended Starfleet Academy.

However, it would be a bit of a PR faux-pas to reveal Discovery‘s lead actress in an offhand interview comment, rather than with an official announcement from the network. All Meyer said was that she’s “in” the show, so we don’t know anything else for sure.