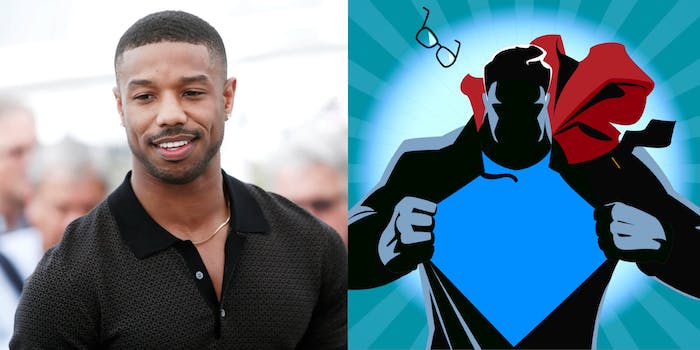 Michael B. Jordan says his take on Superman would stay true to comics

In the not-so-distant future, we could see a brand-new version of Superman.

In the not-so-distant future, we could see a new version of Superman.

The most recent releases have starred Henry Cavill as the Man of Steel, but rumors have been swirling that a new actor might don the cape. While Cavill told Men’s Health that “the cape is in the closet,” fans are already on the hunt for Superman’s next face. That face may someday be Michael B. Jordan.

According to Variety, he met with Warner Bros. this year to “pitch a new version” of the hero. The same report also notes that a new version of the film is unlikely before 2023. In a recent interview with MTV News, Jordan addressed the internet rumors about his future as the caped crusader.

“I’ve been rumored to play Morpheus to Superman, to Duck Tales reboot, to Power Rangers and everything in between,” Jordan said of the rumor. “Anything I do dive into has gotta be done the right way. It has to be full of authenticity.”

.@MichaelB4Jordan plays a real-life hero in #JustMercy, but will he ever play a DC hero? @joshuahorowitz caught up with him to find out! pic.twitter.com/gA7xcHKYKz

Jordan emphasized that he is a big fan of comic books. “I understand, you know, the fans being upset at ‘oh no, why are they doing this and why are they changing that,’ I would feel the same way about certain things,” he continued. “So just know, if I ever were to dibble-dabble in anything, it would be authentic and something that I feel like people would really support.”

Jamie Foxx, who joined Jordan for the MTV interview, was far less optimistic.

“You crazy,” Foxx said. “Boy you flip that? It’s over. You think you’ve got haters now?”

Foxx’s trepidation isn’t unfounded, but neither is Jordan’s optimism. The 32-year-old actor already dipped his toe into the world of superheroes with his role as Erik “Killmonger” Stevens in 2018’s Black Panther. The film was beloved by fans, and Jordan’s role, in particular, received glowing reviews.

That being said, changing anything about a role as iconic as Superman will come with its fair share of problems. When Hermione Granger from the Harry Potter franchise was portrayed by African-American actor Noma Dumezweni in the stage production of Harry Potter and the Cursed Child, the racist backlash was immediate and fierce. Plenty of people, including author J.K. Rowling, loved Hermione as a woman of color.

The same can be said for the recent decision to cast Halle Bailey as Ariel in the live-action remake of The Little Mermaid.

If Jordan were to take on the role of Krypton’s last son, he would certainly face his fair share of racism. Fans of the idea are hoping he disregards the haters, however, and reshapes our idea of who the man of steel really is.