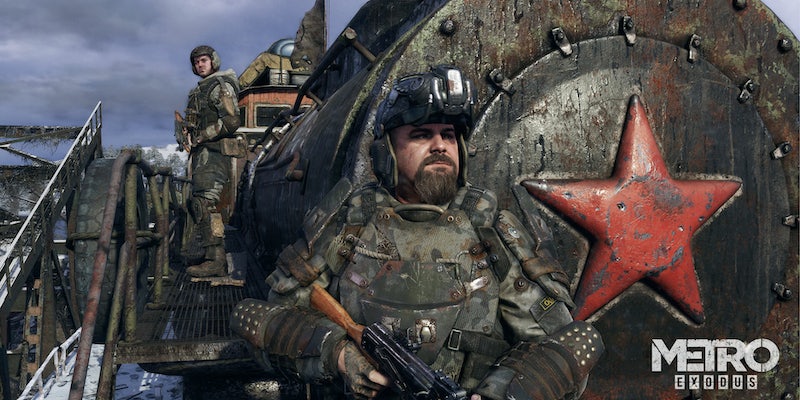 Echoing Half-Life 2 and Wolfenstein, Metro Exodus succeeds in spirit where it fails in mechanics.

Metro Exodus is a game about moments. It boasts plenty of strong, meaningful ones: the kind that make some small sense in a world filled with bat-winged mutants and roaming bands of marauders, and the kind that give you a reason to keep fighting even though you’re exiled from the only home you’ve ever known and you’re surrounded on all sides. But other moments in its combat and objective mechanics are a disappointment. Still, it does the soul good to know that Metro has lost none of the world-building finesse it’s truly known for, even if it comes at the expense of mechanical grace.

Like an underground artist on the verge of going big, Metro series hero Artyom is back, much to the unbridled joy of his fellow subterranean dwellers. Metro Exodus achieves the feat that Witcher III: Wild Hunt once did, of reintroducing us to a character whom most players may have never seen before, with only the most tertiary of details lost in translation. Artyom has long since established his reputation as a hero and savior of the titular Metro system that houses the survivors of post-apocalypse Moscow. Doctors chide him for being back in their offices for the third time in a month, his fellow soldiers toast him in jest, and his equally capable wife Anna stresses about his condition and what to make of his dreams of rebuilding humanity above ground.

This seemingly foolish dream is kickstarted when Artyom and crew discover that a series of trains have been crisscrossing the Moscow wastes and beyond for years, meaning their forced underground existence had been built on a lie. One train hijacking later, Artyom’s crew are exiles, barreling through Russia with no plan beyond realizing Artyom’s dream—somewhere.

In the lead-up to the Metro series shifting from claustrophobic corridor shooter to a series of impressively open worlds, the hope (and perhaps fear) was that Metro would unshackle itself a bit. Surely a post-apocalyptic journey across a Russian hellscape would provide for something more… epic? The first thing that will hit any series newcomer, especially if they’ve been trained on the crosshairs of bigger-budget shooters, is Exodus’ defiantly methodical pacing. There were numerous flashes of this in Metro 2033 and Metro: Last Light, but here on the (somewhat) open road of Exodus, it shines.

On the morning of our sixth month on the rails (essentially the fourth major mission area), as Artyom, I woke up peacefully next to my wife. I offered her a cup of what I hope was coffee, took a drag from a cigarette, and listened to her explain her modest hopes for a nice house and kids as she stared out the window at the countryside. She smiled at me and said to get on with the day’s festivities. After all, we had a wedding to catch. One of our fellow soldiers, Stepan, had hit it off with the mother and child we rescued months earlier from a dangerous cult, and love was in the air. A celebration in the dining car ensued, with music and cheering and plenty of conversation. Stepan played a three-minute song on his salvaged guitar before handing it off to me, and surprise, Artyom is more than just a Wonderwall fanboy. The whole thing had to have lasted more than 20 minutes, and through it all I sat thoroughly engrossed in the lives of these people. Characters process their feelings in real time; they sit and think; they are people. The acting isn’t always spot-on, but I never questioned their humanity, and I always regretted eventually having to leave to continue forward.

Metro Exodus isn’t the only shooter to give a big focus on smaller narrative moments, but is the only one I see doing it at this length, daring the player to find boredom in such quietness. It’s more a narrative adventure than it is a shooter, and this plays to both its strengths and its painful weaknesses.

At its strongest, Metro Exodus mimics the absolute best moments of something like Half-Life 2’s “Water Hazard” or “Highway 17.” There, littered throughout these big open stretches of land, are dozens of little moments that add up to something incredible. In the first major area, a depressing and grayed-out swampland, I entered a prison yard where several innocents were being held in cages. After quietly disposing of the doorman, I entered through an upper window to the rafters above the cages, spotting several guards beneath enjoying their late dinner. A perfect opportunity to slink around from above, I thought—until the creak of the wooden slats gave me away, my dumb self plummeted to the ground below, and I was forced to (noisily) improvise. It wasn’t scripted. I didn’t have to go that way, and the horror I (and they must have) felt was all too real. While trudging through a decimated port-turned desert, I came upon one of dozens of beached ships, hearing the snoring of a mutated ghoul inside. My plan to sneak up on him proved fruitless when a second, far more conscious mutant burst out from behind a stack of bodies. The freaks could coordinate, I realized all too late, and with rudimentary weapons too, judging by the tripwire grenade nearby.

Metro Exodus isn’t afraid to let you sit and stay a while in its world, and you’ll find plenty of time to ruminate as you slowly cross the barren (and often perfectly lively) wastes. A lot of it is predictably empty and “boring,” but the allure of sights on the horizon almost always pulls you in. Giant gushing geysers of steam and fire erupt from underneath the desert’s surface, shimmering in the moonlight; a distant lighthouse is silhouetted so effectively you’ll wonder how you’ll ever make it there. A dense forest filled with the survivors of a nearby grade school is punctuated with crayon drawings and tributes to their late teacher. A colossal military bunker littered with the dark secrets of its inhabitants stands as a contender for “top gaming moment of 2019.” It’s impossible to not feel like developer 4A Games could very competently do its own take on Fallout: Russia.

Ironically, where Metro Exodus begins to falter is in an entirely separate series of small moments: namely, the actual combat that’s meant to serve as sinew between all this travel and merriment. I’ll just say it: Combat in Metro Exodus is mostly a drag. While 4A Games has gone to great lengths to update and streamline much of its shooting (you’re still recharging tools, whipping out a lighter for extra light, and wiping your gasmask clean), “enjoyable” may be a bridge too far. The general ebb and flow of combat never reaches a rhythm that feels satisfying, and it’s clear that 4A Games is trying its best to ape something like Far Cry or Wolfenstein, just without the same sense of grace.

Guns are suitably grimy and held together with enough bubblegum to fuel a middle-school clique, but the act of shooting a bandit or a mutant with a round of bullets feels disappointingly weightless. Navigating environments while in the thick of battle can also lead to some frustration, as you’ll be wondering what little bit of jagged architecture you’ve gotten caught on while you’re being filled with lead.

Similarly, the game is occasionally awful at letting you know exactly where or what your objective is in both linear and open-ended scenarios. A desert shootout between the train’s crew and encroaching bandits resulted in constant trial-and-error, with a single armored enemy picking me off from across a blurry battleground while the game was evidently waiting for me to finish the fight myself, despite the friends at hand. Simply moving can sometimes feel archaic or erratic. Driving a van down the desert road to my next objective proved to be more awkward than Resident Evil tank controls, as the Volkswagen knockoff nosedived and skyrocketed into the air with every awkward bump on what should have been a two-minute journey.

Regretfully, there’s also a number of infuriating bugs. During what would have been an incredibly spooky and mysterious adventure into the aforementioned military bunker, my dear Artyom took one step in the wrong direction off a cable car and became trapped below, unable to shimmy his way onto the platform to reach an elevator. As much as I adored Exodus’ willingness to build up a moment by taking our sweet time getting into the bunker, replaying a 20-minute segment just to reach the conclusion of all that build-up again sucked much of the life out of it. Toss in a few instances of guns disappearing or becoming non-interactable (a problem when you have to grab a gun to really see its specs), plus a few instances where gorgeously animated beasts seemed intent on extremely awkward paths, and that “bubblegum and staples” vibe starts to grind you down.

Despite these gripes, it’s clear that 4A Games has sacrificed none of Metro’s survivalist spirit. Amid all the ruin, murder, and mutation, there’s a humanity to this game that few other shooters ever reach. What started out as a cast of generic white guys (and a few POC) has become a family—people I’d reach out to, sit and drink with, make merry with until our throats became sore. Outside our comfy mobile fortress, the harsh European and Asian lands are inhospitable to all but the cruelest, but they do contain depictions of life that will stick with you. Metro Exodus isn’t afraid to tell you to take a load off and just be a human being, and for that, I love it. Otherwise, what were we ever dreaming of and fighting for in the first place?

Metro Exodus was reviewed on PC using a code provided by the publisher. The game releases on Feb. 15 on PS4, Xbox One, and PC.