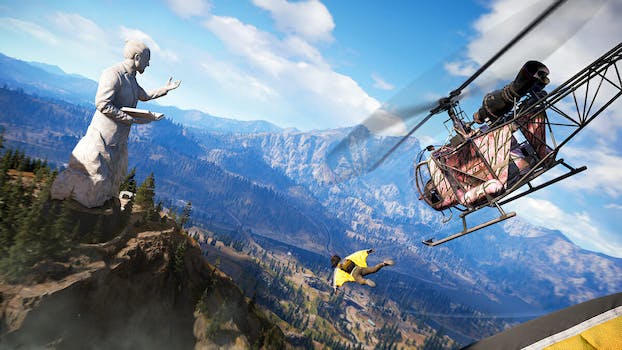 Far Cry 5 takes all the things this series does best, and blends them together in the most cohesive package yet.

Ubisoft landed on the Far Cry template years ago. You always play as an outsider who comes into a sealed-off geographic area ruled by a despot. Your job is to lead the resistance, toppling enemy outposts and taking down the violent dictator. It’s a solid foundation, but it’s started to show its seams in recent years. Far Cry 5 doesn’t ditch the template, but it uses it in a more natural way. It’s just the evolution this series needed.

You play as a deputy sent to Montana by the federal government to arrest Joseph Seed, the leader of a militaristic cult called Eden’s Gate. The cult has been running amok, stealing people’s land and violently brainwashing them to step in line. Joseph Seed has three lieutenants, each of whom controls an enormous piece of real estate. Your job is to take back the land and put an end to Eden’s Gate.

So far, so Far Cry. But it’s the structural details and quality-of-life updates that make the experience feel more like a cohesive whole than previous games. It’s a remarkable achievement that adds up to one of the most mindlessly enjoyable shooters in years.

In typical open-world fashion, you start out with limited abilities. In previous games, you’d unlock new abilities through a number of different mechanisms. For instance, you might have to hunt X number of sharks to craft a bigger ammo bag. Now, all progression is based on buying perks using Perk Points you earn simply by playing the game. Perks include everything from unlocking new weapon slots and sneaking faster, to learning to crack safes. Progression feels streamlined this time around.

So does exploration. Instead of climbing towers to reveal new areas on the map, the fog clears as you travel into uncharted territory. The game marks down enemy outposts and friendly locales when they come into view. This change makes you want to explore for the sake of seeing what’s out there, rather than clearing icons off your map.

The mission variety is nicely varied, as are the characters assigning your missions. There’s a priest who keeps a handgun in a hollowed-out Bible and an alien conspiracist who lives alone in the woods. The tone of the game can swing wildly depending on what character’s onscreen, but that’s Far Cry for you. Somehow it all works.

You’ll take control of vehicles ranging from boats to semi-trucks, and all of them are a blast to drive. Helicopters and airplanes are a particular treat. Not only are they great for revealing the map, but they’re also forgiving with takeoffs and landings—something that’s rare in games for some reason.

As you explore and chat with locals, you’ll find Prepper Stashes scattered around the map. These end-of-the-world bunkers are stocked with goodies you can collect. To access them, you have to solve clever environmental puzzles that might require precise platforming or mental dexterity. Once you reach the stash, you’re rewarded with money, weapons, and Perk Points.

If you need a break from Hope County, you can jump into Arcade Mode. Here, players can design levels using art from a number of Ubisoft games. It’s like Mario Maker meets Far Cry. With enough community support, Arcade Mode could deliver an ongoing injection of new content, even after the three expansions come and go.

The complaints I have are minor. While the game environment is blisteringly gorgeous and would be enjoyable to explore at a leisurely pace, such periods are practically nonexistent. Kill-crazy cult members lurk around every corner, ready to surprise you with a barrage of rifle fire. It can get exhausting. Nor is the difficulty ramp entirely smooth. Some missions had me grinding my teeth as I tried and died repeatedly for way too long.

But none of that matters much in the end. Far Cry 5 is so consistently exhilarating on so many levels that it’ll keep you happily cutting down cult members for dozens of hours.

This game stands out as an exceptional entry in a series that has consistently delivered action-movie thrills. If you’ve felt series fatigue creeping in with recent entries, Far Cry 5 is just the antidote you need. It’s an incredible game. Play it. Love it. Just don’t get brainwashed by the cult.

Disclosure: Ubisoft provided a copy of Far Cry 5 for this review.