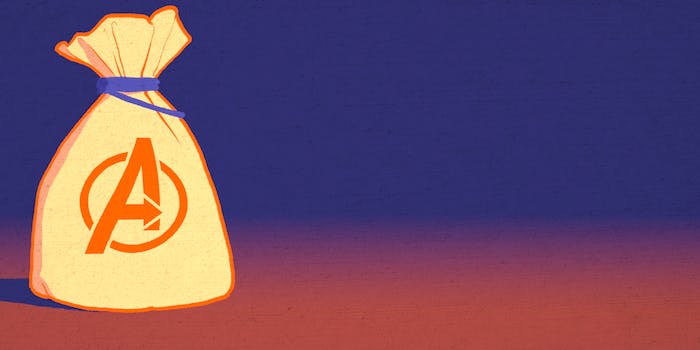 For a company that shaped the future of Hollywood, it’s surprising how little we hear about Marvel Studios‘ tumultuous origin story.

Stan Lee is a staple of Marvel’s public image, and we hear plenty about the birth of characters like Captain America and Spider-Man. But the bankruptcy and infighting of the mid-1990s that almost led to the company’s collapse? Not so much.

It’s no surprise that Marvel might want to gloss over this period in its history, but that mid-’90s disaster had a silver lining: It created a vacuum that was filled by young creatives like Mark Millar and Joe Quesada, who revamped the Marvel brand. It also resulted in a takeover led by Ike Perlmutter and Avi Arad, who went on to found Marvel Studios and turn the comics publisher into a Hollywood colossus.

This rags-to-riches tale is explored in the French documentary Marvel Renaissance, which chronicles the events that almost caused the comics giant to go bust. Marvel’s bankruptcy troubles are public knowledge, but with interviews from insiders like Avi Arad and Mark Millar, it’s interesting viewing for new fans who discovered Marvel via the movies.

From the perspective of the Marvel Renaissance narrative, Arad and Perlmutter were outsiders who saved Marvel from the clutches of clueless Wall Street investors. But in 2016, Arad is out, and Perlmutter is now the living embodiment of the reclusive billionaire stereotype—only visible through bizarre anecdotes and unintentional disclosures like the Sony email leaks or his recent $1 million donation to a Donald Trump super PAC. As for the comics industry in general, many people are worried that DC and Marvel may be repeating the mistakes that led to the boom-and-bust scenario of the mid ’90s.

Marvel Renaissance had its international premiere at the Glasgow Film Festival last week, where we spoke to filmmakers Philippe Guedj and Philippe Roure about Marvel’s brush with bankruptcy, and beyond.

Marvel Renaissance has a really interesting narrative, a mixture of financial thriller and a kind of underdog superhero story. How did you come to make the film, and were you surprised someone else hadn’t already told that story?

Philippe Guedj: There are three factors that led to the idea of making the film. The first reason is that both Phillipe and I are old-time comic book fans, we grew up reading the French translation of Marvel comics in a very famous magazine called Strange.

The second reason is that we had read a book called Comic Wars by Dan Raviv, who was the first one to really tell the story in a book. It was obvious for us that it was great material for starting to write a wider, broader story about Marvel.

The third reason is that we noticed no one so far had ever made a TV documentary about Marvel, other than just about… superheroes and superhero culture. None of these documentaries had so far addressed the near-death experience of Marvel and its spectacular rebirth.

Philippe Roure: The story in itself was amazing, the financial aspects. It’s a story bigger than life. The fact that these two outsiders, Avi Arad and Ike Perlmutter, started in America with nothing, and became big financial businessmen—it was this idea that [inspired us] to make the movie as a financial thriller, like Wall Street or Margin Call or the documentary Inside Job—in which there is one of our participants, Harvey Miller, the former lawyer of Marvel. It was not only a story about superheroes, it was a financial story in the background of the superhero industry.

One of the unintentional results highlighted in the film was how difficult it is to get access to Marvel. You got all these great interviews with well-known people in the industry, but none of them are currently working for Marvel. Could you tell me about the process of trying to get interviews with insiders?

PG: Very candidly… in the beginning, we wanted to make this movie with the help of Marvel. We wanted to shoot at the Marvel Entertainment offices in New York. We wanted to shoot entire sequences at Marvel Studios in Los Angeles, we wanted to have interviews with Marvel current executives. That’s why at the very beginning of preproduction, in early 2012, we had a rendezvous with the people of Disney in France, because we thought it would be the logical start to introduce them to the project, tell them the story we wanted to tell, and ask them to take the message to their Marvel counterparts.

Very quickly it appeared that this would be completely impossible. I will remember all my life a phonecall that we made to Arun Singh, who at the time was the PR guy for Marvel on the East Coast. He was very polite, very friendly. But once we asked him if we could have an interview with Ike Perlmutter, suddenly: the wall. He would not even let me finish my question. As soon as he heard the name Ike Perlmutter, he said, that’s impossible. You will never meet him, you will never talk to him, he will never talk to you. And this very day, we should have guessed that the way Arun answered us was a hint that nothing would be OK with Marvel, and that Marvel would never help us.

The rest of the events confirmed that indeed, we would have to make the film without Marvel. That was definitely confirmed by the email we received in late December of the same year.

PR: On the 31st of December at 10 in the evening. A kind of happy New Year! It was to say that Marvel won’t participate in the project, they won’t help us. They don’t forbid us to do the film, but we have to be very careful about what we say about Marvel, and how we use the Marvel material.

The film isn’t negative towards Marvel, it depicts the story quite positively. Their problems arise from poor management, from Wall Street. And the men who brought Marvel to greatness, Avi Arad and Ike Perlmutter, almost come out as underdog heroes toward the end. So do you think Marvel’s lack of interest came from the studio’s desire to control its own image, or directly from Ike Perlmutter’s obsession with privacy?

PR: It seemed that the “no” about helping us came from Ike Perlmutter himself. That’s what people from Disney France told you when you spoke to them. Ike Perlmutter doesn’t want to hear about this story any more, it’s the past, and he’s a very mysterious man. He lives hidden, all the time. That’s what we show in the movie, there is only one picture of him on the Internet. It’s in the ‘80s, he looks like a character of Mad Men, he’s very elegant… it’s the only picture, you won’t find another.

PG: The Avi Arad part, to explain the reason why Marvel didn’t help us, is also important. I think Avi Arad kept a lot of resentment towards Marvel. It seems obvious now that he has been… I don’t know if I can use the word “fired,” but it truly seems that the separation was not amicable between him and Marvel Entertainment. We don’t know the whole truth, to be honest, and the documentary tells just part of the truth.

It seems that Kevin Feige, who was Avi Arad’s protege first… since he became the head of Marvel Studios, after the departure of Avi Arad, Kevin Feige and the whole Marvel establishment decided to make sure that Avi Arad does not really appear any more in the big picture. When we got in touch first with Avi Arad, we really felt that the guy needed to remind Marvel that he was still here, and that he had played a great part in this story. I think that we started to make this film in the midst of kind of a battle of influence between Avi Arad and his former employer.

We came at the right time, I think. Plus Avi was starting his promotion duties on the first Amazing Spider-Man, so it was very convenient for him, to know that these two Frenchies were about to make a documentary for Canal+, that would tell a story where he could give himself the credit for the story.

Toward the beginning of the documentary, you have an interview with [writer] Jimmy Palmiotti, talking about the events that led up to the bankruptcy. He’s talking about how Marvel was selling comics as collectibles, they were using lots special variant covers and hiking up prices. Is that something you see reflected in the current comics industry, between Marvel and DC?

PG: That’s what we heard. The truth is that we are a little bit less [into comics] now than we used to be… when we were making the film.

I’ve heard from friends who run magazines about comic books in France that indeed it seems that Marvel and DC are starting to reproduce the same mistakes that they did in the early ’90s, by raising prices, making variant covers again, and I’ve heard that… the situation is not the same, because in the early ’90s the comic book sector, the publishing market, could not rely on the movie market as strongly as it does now.

I think that sales of Marvel publishing are currently really good. I don’t know how long it will last, but it’s really good because they are still on a very good movie trend. And I think the synergy is really working 100 percent. DC, on the contrary, I’ve heard is in a much more fragile position. And everybody heard that DC Comics is about to do another…

They’re about to have their second reboot in about 18 months.

Maybe it’s a sign that we could reach another comic book bubble in maybe the next two or three years. But we don’t know much more.

So if you could give advice to Marvel and DC, what lessons do you generally think they could learn from the events in your documentary?

PG: Not to be greedy. Just like the last line of the film, when Mark Waid says, “Let the creatives do their magic.” I think that the biggest mistake for Marvel was them only searching over margins, profits, marketing coups, and forgetting the essence and the soul of what this industry is about. Which is good stories, endearing characters, and respect of the readers.