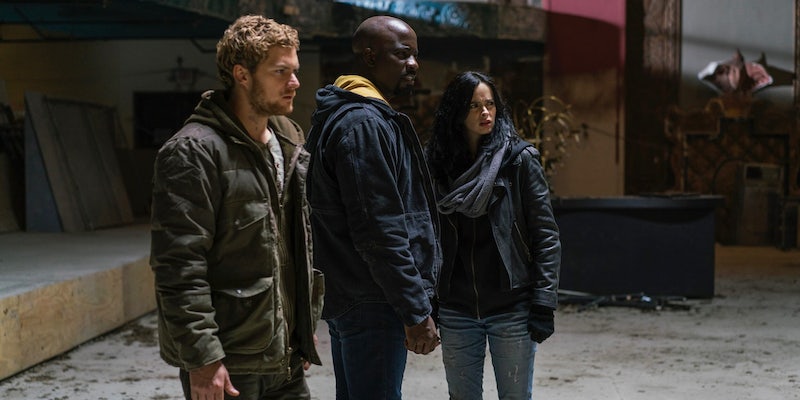 We wouldn't be able to see three superheroes on Disney+ until 2020 at the earliest.

Netflix has given the ax to three of its five Marvel series in the past two months, leaving fans to question the fates of its two remaining shows. But those hoping for a quick reprieve from Disney+ (Disney’s upcoming standalone streaming service) will have to wait even longer—if it happens at all.

According to a new report from Variety, there is a clause in the original deal to bring the original four Marvel shows to Netflix that stops Disney from being able to use the characters in TV shows or films outside of Netflix for two years after they’re canceled.

In the case of Daredevil, Luke Cage, and Iron Fist—which were all canceled within the past two months—we won’t be able to see those superheroes appear on any Disney+ shows or films or in the Marvel Cinematic Universe until at least 2020. For Jessica Jones, whose third season won’t air until some time in 2019, Marvel couldn’t use that character until 2021 at the earliest. And that’s assuming that Netflix cancels Jessica Jones after its third season debuts. A potential Defenders revival is probably off the table for quite a while.

It’s less clear what that means for The Punisher, which Netflix picked up after the character’s debut in Daredevil’s second season and whose second season premieres January 2019. The show wasn’t part of Marvel’s original deal with Netflix, but we don’t know if the clause in the Marvel and Netflix deal covers characters who appeared in those four original shows or just the four superheroes at the center of it. If it does apply to other characters, not only would another Punisher appearance in a Disney+ property be impossible until at least 2021, it’d likely apply to other characters who fans wanted to see get their own series such as a Daughters of the Dragon show starring Misty Knight and Colleen Wing.

Of course, speculation on whether Marvel even wants to pick up those characters any time may be premature. Marvel already has a plan for Disney+, which so far involves giving limited series runs to existing MCU characters. Tom Hiddleston confirmed the Loki series last month while two other TV shows starring the Scarlet Witch and Vision and Falcon and the Winter Soldier are in the works. (Marvel also still has three non-Disney+ shows still on the air between Agents of S.H.I.E.L.D., Runaways, and Cloak and Dagger.) By the time that the Defenders are able to rejoin the MCU on Disney+, the TV landscape may look so different that they might not even work in their original Netflix forms anymore—or Marvel may just decide to start from scratch.