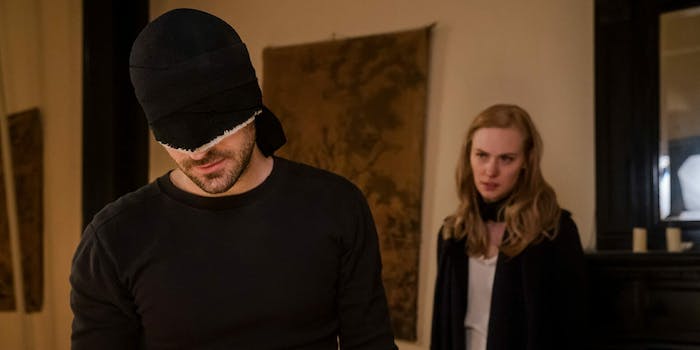 This probably marks the end of Netflix's Marvel run.

Daredevil, Marvel‘s flagship show on Netflix, has been canceled after three seasons. This is most likely the death knell for Marvel’s Netflix franchise, after Luke Cage and Iron Fist were canceled last month. Jessica Jones and The Punisher still have new seasons coming up next year, but with Daredevil gone, we won’t be surprised to hear cancellation notices for them as well.

These cancellations may be connected to the launch of Disney‘s new streaming service, Disney+, which will air new series starring high-profile characters like Loki. Neither Disney nor Netflix will be enthusiastic about having separate Marvel properties in direct competition for subscribers. Deadline also points out that Netflix and Marvel TV have had some creative differences over details like the number of episodes per season.

In theory, some of the Netflix shows could find a new life at Disney+. Netflix’s cancellation announcement says that “Marvel’s Daredevil will not return for a fourth season on Netflix,” suggesting that it could return for a fourth season elsewhere. However, fans shouldn’t count this as a certainty. While Daredevil is thought to be popular, Netflix has never released its viewing figures, and Disney+ may decide that the show isn’t worth its budget.

The good news for Daredevil fans is that if the show ends here, it went out on a high. Season 3 earned stronger reviews than season 2 and ended on a comparitively positive note for Matt Murdock and friends.

After this, it’s hard to imagine The Punisher and Jessica Jones lasting beyond their upcoming seasons next year. This means that Marvel’s entire Netflix franchise lasted just five years, beginning in 2015 and ending in 2019. By contrast, Marvel’s more conventional TV procedural Agents of S.H.I.E.L.D. is still going strong on ABC, recently renewed for a seventh season up to 2020.